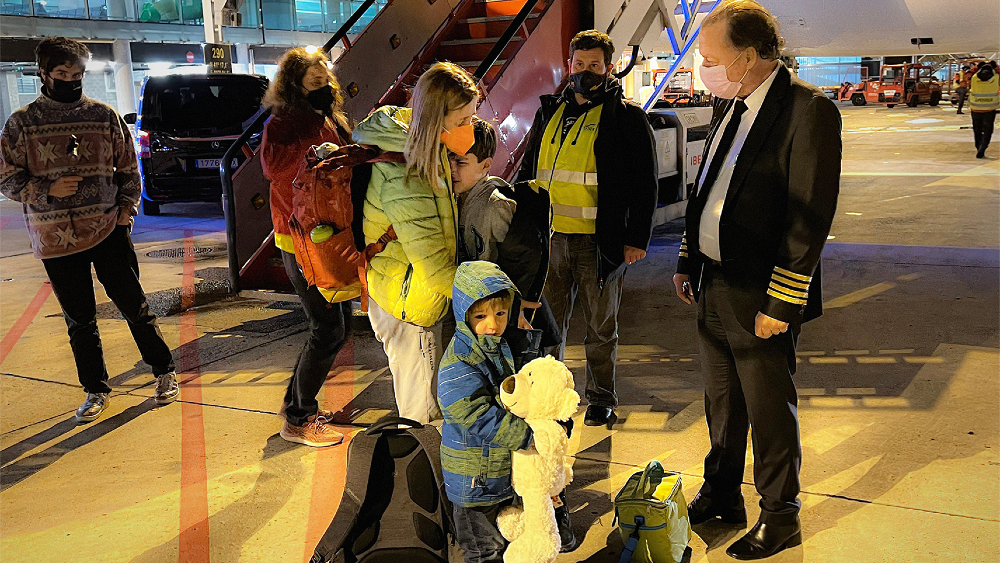 In the last week, Argentinian film director Enrique Piñeyro has been flying multiple rescue missions aboard his foundation’s Boeing 787, transporting refugees from Ukraine to new homes in Italy and Spain.

Piñeyro, who has made a number of successful documentaries, including Whiskey Romeo Zulu, is also a commercial airliner pilot. He founded Solidaire for humanitarian crises and flies the organization’s PR-787 with a co-pilot. The aircraft looks like any commercial airliner, with multiple rows of seats, but the passengers are tired, disoriented and sad—displaced refugees who fled Ukraine to Warsaw, Poland and are now on their way to communities in Spain and Italy.

“We’ve been flying an average of 200 passengers, mostly women, children and seniors, on each trip,” he told Robb Report. “Most look kind of shell-shocked when they get on the aircraft. The children, in particular, don’t really understand what is happening.”

Enrique Piñeyro in the cockpit of his Boeing 787.  Courtesy Solidaire

Piñeyro recalls one family who broke down in tears when they arrived in Spain. “The mother was trying to comfort one son, who was about 12, embracing him and trying to hold him up,” he says. “The four-year-old younger brother was looking on in awe. He couldn’t understand what was going on.”

But the mother and older brother did: This was the first time the family was setting foot on Spanish soil, and suddenly the realization that they had left their homes, father and extended families for a new, unwanted start dawned on them. “Everything they had ever known was left behind,” says Piñeyro.

Solidaire is working with Open Arms, a Spain-based NGO that finds homes for the displaced in countries in southern Europe. The two have collaborated on previous rescue missions of migrants fleeing Syria by crossing the Med on unseaworthy boats, and Solidaire has also transported African migrants in other crises. “The Africans were singing and dancing when they arrived in Europe—they wanted to leave the conflict zones,” he says. “None of the Ukrainians wanted to leave their country, so they tend to be dispirited.”

The saddest part of the trips, says Piñeyro, is seeing displaced refugees who only know life in Ukraine having to start over in a new country.  Courtesy Solidaire

The 787 is also transporting pets with the families, which became an issue when one dog got loose in the cabin. Now, all pets are transported in the cargo hold in their own cages, much as commercial airlines are doing.

Piñeyro wears his pilot’s uniform and stands at the bottom of the aircraft’s stairway greeting each refugee, and then wishing them luck as they leave. Some come up to him and hug him. But he’s not in this for notoriety or praise—or even a documentary. “We don’t have time for that,” he says.

Mothers and children are the main passengers aboard the refugee flights.  Courtesy Solidaire

The filmmaker sees this as a long-term exercise, potentially stretching into months. “Even if there was a ceasefire tomorrow, there is still all the destruction in Ukraine,” he says. “That will take months or even years to rebuild.”

Piñeyro has met Argentinian embassy officials in Italy and says his home country has agreed to take in refugees. He thinks they could fly from Poland to Buenos Aires in coming weeks. “These are very sad missions, but we have to do it,” he says.