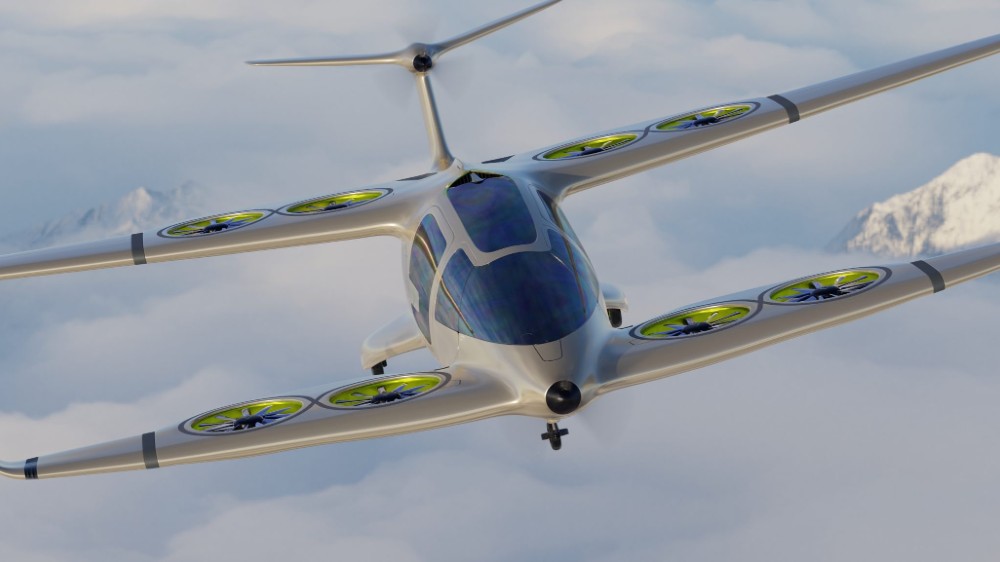 Ascendance Flight Technologies has debuted its new VTOL, with a forward propeller and fans for vertical liftoff in its wings. The five-seat ATEA was designed to operate either intra-city or regionally, with its range of 250 miles. The French startup said that carbon emissions would be cut by 80 percent, thanks to hybrid propulsion that include jet fuel and electric. The two systems operate independently, with the electric engines working the rotors and the jet engines operating the forward propellers. The redundancy adds a layer of safety, said the company.

The fan-in-wing configuration is what sets the eVTOL apart in the rapidly growing field. It has eight rotors in its forward and rear wings, which lowers its noise signature significantly compared to conventional helicopters, as well as two forward-facing propellers. The “Skyview” cabin offers good visibility, with easy access for passengers. Turnaround time for recharging the aircraft will be 10 minutes, according to the company.

“We set up Ascendance Flight Technologies to accelerate transition towards green aviation thanks to hybrid technology,” says Jean-Christophe Lambert, co-founder and CEO in a statement, noting that its three-year development time involved testing four prototypes. “We also put in a great deal of thought on costs and the ease of flying such an aircraft,” he said.

The AETA has two forms of propulsion that reduces carbon emissions but extends its range.  Courtesy Ascendance

Lambert says the AETA is adaptable to new fuels including sustainable aviation fuel, biofuel and, at some point, hydrogen fuel cells. The hybrid propulsion incorporates embedded intelligence from an energy management system to enhance cruise time and speed, as well as recharging on the ground.

Beyond passenger service, the aircraft will be designed for emergency medical services, patrol and surveillance. Lambert said that ATEA has been designed in compliance with the standards of the European aviation authority, EASA, for SC-VTOL regulations. The company expects to start production in 2025.