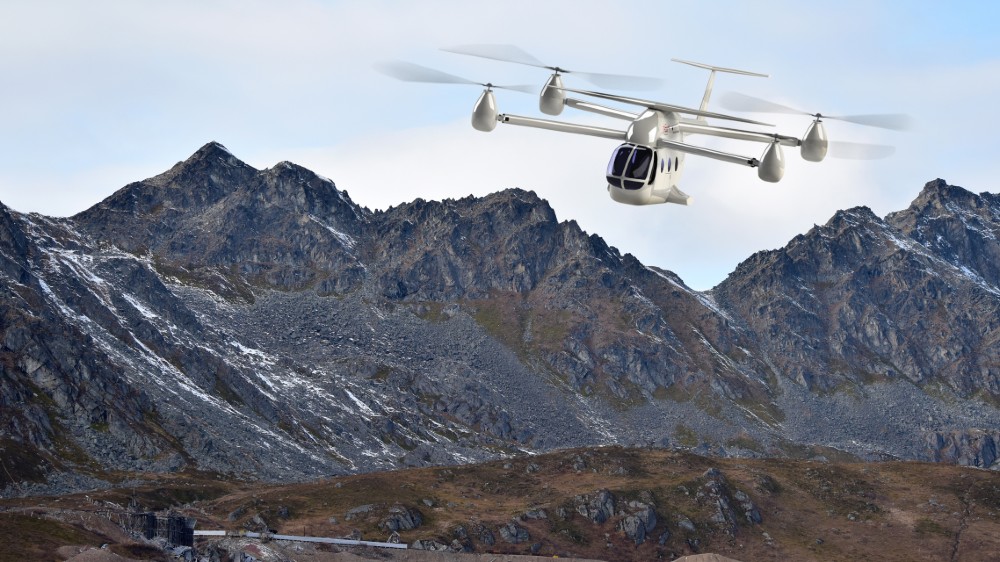 Spare the blade, spoil the eVTOL. No one has actually said that, but it’s an ethos that has pervaded the burgeoning vertical-take-off world, where most models use small rotors and some have as many as eight or more. The bias exists largely for two reasons: Vehicles with multiple smaller blades provide a fail-safe redundancy (i.e. safety), and they create greater speed and efficiency during forward flight.

RotorX, a prolific manufacturer of two-seat helicopter kits based in Arizona, has a different idea. The company recently introduced the concept for its RX eTransporter, which it bills as “the world’s most efficient helicopter.” And as the build-up would suggest, the design features four large rotors mounted on cross arms, a helicopter-like body big enough for six-to-nine adults, and small wings on the body and the tail.

The combination makes for an intriguing mix of performance characteristics, at least according to the company’s projections. The wing will work with the rotors to provide a top speed of 160 mph and, at a cruise of 140 mph, it will have a range of 200 nautical miles on 1.5 hours of battery life. More impressive, the eTransporter will be able to lift 1,600 pounds of people or cargo and hover in one place for 45 minutes. Most small-rotor vehicles can usually hover for a few minutes at best.

The eTransporter’s range and 45-minute hovering ability are two of its strongest assets.  Courtesy RotorX

The numbers are theoretical for now, but they’re well informed, as RX developed the concept in coordination with partner company Advanced Tactics in Torrance, Calif., which built the Marine Corps-funded, eight-engine Black Knight Transformer, a.k.a. The Flying Truck. For the eTransporter, the designers addressed the safety issue by including more than one motor per rotor, so multiple engines would have to fail to lose one. Even if that happened, the size of the rotors would cause them to free spin against ambient air pressure, allowing for a controlled landing.

“Our rotor system is one of the strongest in the industry,” Don Shaw, RotorX CEO, told Robb Report. Before RotorX, Shaw made a name for himself designing and building heavy-lift, multi-copters for the military. “In fact, I’d been eyeing these rotor systems for some time and actually bought the company so we could build this new aircraft,” he says.

The rotor systems are already FAA certified, says Shaw, which should expedite certification for the eTransporter. The company plans to build the Transporter prototype in the fall, but initially it will be powered with gas engines. At the same time, RotorX will be testing electric engines in its conventional helicopter. Once both both applications have been proven, the electric engines will be installed in the eTransporter.

After being tested in Alaska next year, the eTransporter could become the first electric aircraft in an air-taxi network developed for the state’s most remote areas.  Courtesy RotorX

The gas-powered Transporter should start flying by the end of this year, and then testing will move to Alaska, where Shaw is also working on military projects. “The goal is to start using it as an air taxi up there,” he says. “It’s remote and many areas don’t have roads, so there’s a need for aircraft like this.”

While the cabin will have “comfortable charter-jet type interiors” for the air taxi market, the payload and enhanced hovering ability make the new aircraft particularly attractive for shipping and other operations, including search-and-rescue. RX hopes to have the eTransporter certified in 2024.