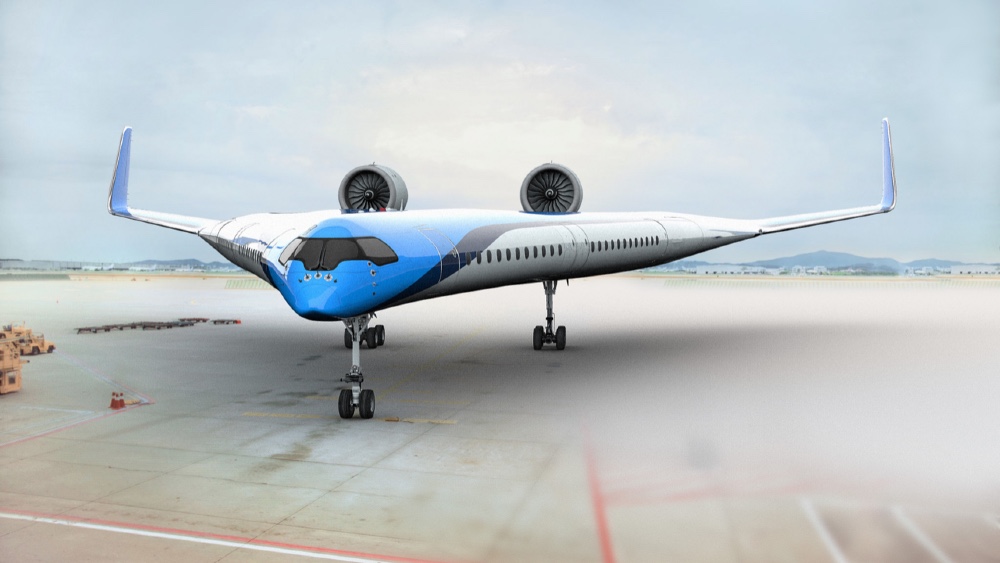 The Flying-V, an experimental aircraft that promises significantly greater fuel efficiency over more conventional commercial jet designs, is moving towards a larger, more detailed version since the scaled, 10-foot model took flight in 2020  in Germany.

The Flying-V was designed as a fuel-efficient, long-range aircraft in which the passenger seating, fuel tanks and baggage hold are built into the wings. The aircraft will eventually have a 214-foot wingspan. Research shows that the unusual design stands to gain up to 20 percent better fuel efficiency than an Airbus A350 jetliner, considered today’s most advanced design. At full scale, the Flying-V would seat 315 passengers in two classes.

“We’re working on an updated version to improve its design,” says Justus Benad, the Flying-V’s chief engineer and faculty member at Delft Technical University (TU Delft) Aerospace Engineering department in the Netherlands. “We currently have ongoing research projects on aerodynamics, structural engineering, the noise of the aircraft and how it behaves in flight.”

RELATED: The ‘Flying-V,’ a Fuel-Efficient Alternative to Jumbo Jets, Flies for the First Time

The university’s blended-wing aircraft concept has financial and technical support by KLM Airlines. The Flying V was flown eight times last year from a German airbase, with the support of a team from Airbus, and there are plans for more test flights this year.

Benad says data from the test flights are used to “feed simulators” for the aircraft. KLM pilots are now flying the unusual aircraft in simulation mode. “It flies very well—like a normal jet,” he says. “Everything we’ve done so far proves to us that it’s a viable and more efficient aircraft.”

The design actually started about a decade ago when Benad was an intern at Airbus in a department looking at alternative wing configurations. “They’re still tied to the project and have assisted us with the flight-campaign model,” says Benad.

Currently, the Flying-V program has a permanent staff as well as graduate students working on it. The long-term plans are to move from the simulators to wind-tunnel testing to prove the aircraft’s efficiency, and then build a mockup of the cabin. Eventually, a full-scale version will be built for testing.

Future versions of the Flying V could also be configured with hydrogen propulsion. “They could integrate the hydrogen tanks easily into the shape of the aircraft,” says Benad.