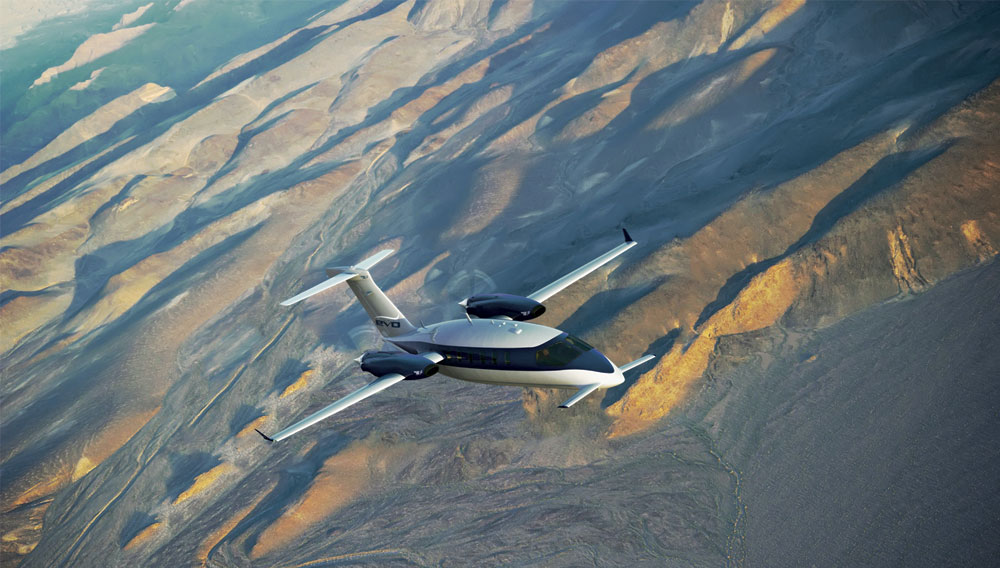 Piaggio’s Avanti turboprop has evolved to offer greater range, more comfort, and as much speed as ever.

The Avanti Evo, Piaggio Aero’s newest twin turboprop, retains the distinctive look of its predecessor while offering longer and quieter flights. And with a top speed of more than 460 mph, the new model is just as fast as the previous one, the P.180 Avanti II, which has been billed as the world’s speediest turboprop.

New winglets on the main wing, a reshaped forward wing, and redesigned engine nacelles provide gains in aerodynamic efficiency that result in boosted performance and reduced fuel burn. Compared to the P.180 Avanti II, the Evo climbs 3 percent faster to its 41,000-foot ceiling and, more significantly, it has 17 percent more range. Under the right conditions, it can fly nonstop for 1,980 miles. The Evo’s two engines are equipped with new five-blade propellers that, according to Piaggio, help to reduce the plane’s exterior noise by 68 percent compared to that of the Avanti II. The noise inside the cabin is reduced by 20 percent.

The company also gave the cabin a makeover, furnishing it with new seats and improving the air-conditioning and lighting systems. The cabin—which is nearly 15 feet long (not including the cockpit), just over 6 feet wide, and 5 feet 9 inches tall—can seat as many as nine passengers. It maintains sea-level air pressure when the aircraft travels at an altitude as high as 24,000 feet. The cockpit is designed for one or two pilots and features the Rockwell Collins Pro Line 21 avionics suite.

Piaggio Aero, which is headquartered in Italy and owned primarily by Abu Dhabi’s state-run Mubadala Development Company, began delivering the Avanti Evo in October. The aircraft is priced at about $7.4 million.

The Avanti Evo’s origin can be traced to 1979, when Piaggio Aero began working on the P.180 Avanti, the predecessor to the P.180 Avanti II. It featured a shape similar to the Avanti Evo’s and the same pusher configuration, in which the propellers are mounted behind their engines. After more than a decade of development, the company introduced the P.180 Avanti in 1990. Most airplanes depend on a downward force on the tail surfaces to provide stability, but this force also creates drag. The Avanti models feature a small wing up front, a main wing near the back of the fuselage, and a T-tail. This design provides stability without creating the extra drag produced by the traditional configuration.

The fuselage is also designed to maximize lift. Its shape enables the wing surfaces to be smaller, which further reduces drag. Because drag is minimized, the Avanti models burn less fuel. Piaggio claims that the hourly operating cost of an Avanti is as much as 40 percent less than those of comparably capable business jets.