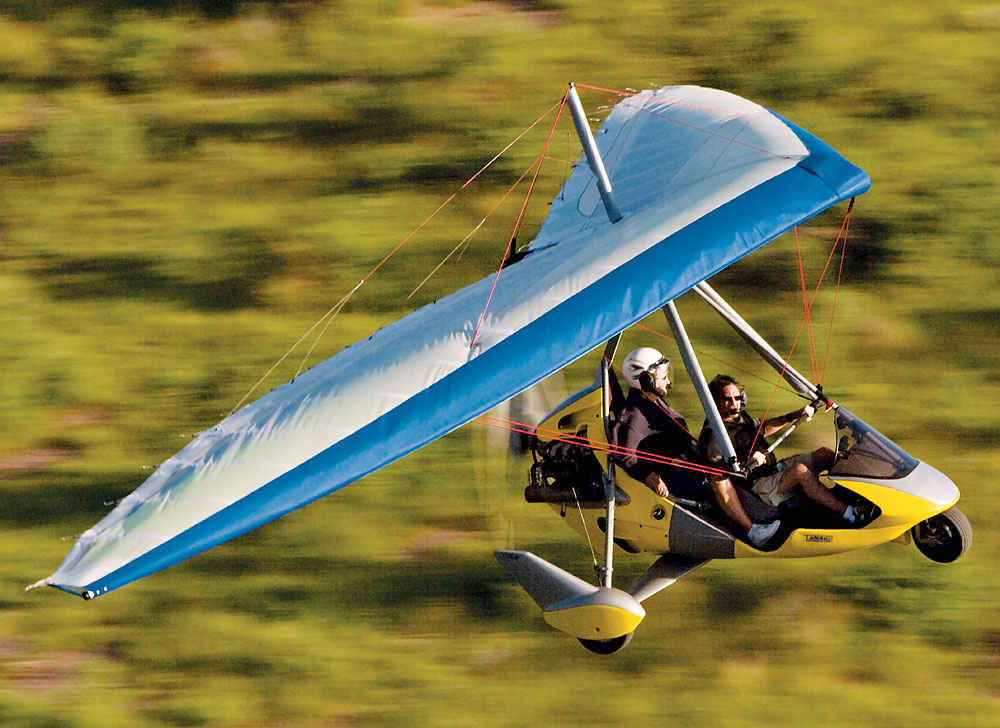 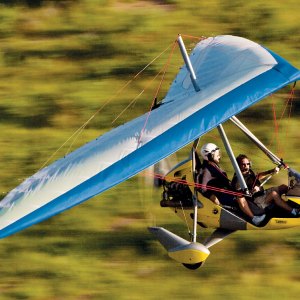 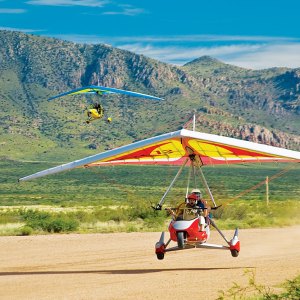 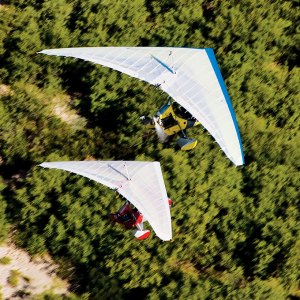 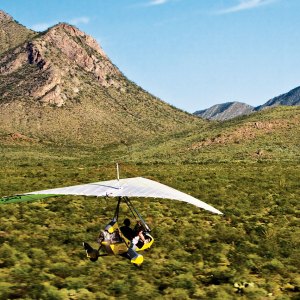 We are hurtling toward rust-colored rocks. But John McAfee, sitting in front of me, seems relaxed enough. His fingers nudge the metal tube that controls the single, fabric-covered wing of this tiny aircraft, keeping us level in the bumpy air.

I perch on a narrow seat, resting my feet on posts on either side of McAfee, like a passenger on a motorcycle. McAfee chats over the radio with another pilot flying nearby, and I am tempted to tap him on the shoulder and ask, “Do you see that mountain in front of us?”

The aircraft is a kitewing, and this is my first flight in one. Although I have a pilot’s license and fly frequently, I find the experience a bit unnerving, with nothing but a seat belt and shoulder harness to secure me here—a thousand feet above a desert floor in New Mexico.

The mountain looms large, filling my frame of vision. Finally McAfee pushes the steering bar, causing the wing to bank sharply. We glide into a gully, where rocky outcrops pass by just a few feet away on either side.

We continue to cruise in and out of canyons, close along their sheer cliffs, bathed in the warm wind. Before long, trepidation gives way to a sense that this is how humans were meant to fly. The kitewing, with its four-stroke Rotax engine and high-tech wing, is powerful enough to climb and travel quickly, nimble enough to turn almost instantly, and maneuverable enough to fly low and slow only a dozen feet above the terrain. I feel like a bird.

McAfee and his band of fellow sport fliers call themselves the Sky Gypsies. They number close to 200 and range in age from mid-20s to mid-60s. McAfee, tall, lean, and tan, is 62 but looks a decade younger. He discovered kitewings a few years ago in a magazine story and scanned the web to learn more. His research led him to John Kemmeries, who had been flying hang gliders and ultralights since the 1970s. Kemmeries Aviation, near Phoenix, was widely acknowledged as the place to learn to fly kitewings, so McAfee traveled there from his home in Colorado and took some lessons. “But we were just buzzing around near suburban airports,” he says. “I felt these aircraft weren’t being used to their full potential.”

Then Kemmeries introduced him to aerotrekking: flying cross-country (quite low to the ground at times), landing on sandbars and dirt roads, and exploring empty places on the map. “We’d go swimming in remote rivers so full of fish you could touch the water and they’d come to the surface,” Kemmeries recalls. “It would take days of hiking to get to these places.”

McAfee loved it—but aerotrekkers faced challenges. Kitewings used auto gas, but most airports carried only aviation fuel. Maintenance and repairs in the field were difficult. Food and camping gear for longer trips required ground support vehicles to follow along. When the weather turned inclement, you could face a long, dull time waiting for a break. The sport would improve, McAfee thought, if it had a network of stationary facilities for the pilots and aircraft. Forming such a network became his mission.

McAfee had enough funding to realize his vision for aerotrekking; he had earned a fortune developing antivirus software some 20 years earlier. With some of that money, he acquired 80 acres in Rodeo, N.M., about 100 miles from the nearest grocery store, on the edge of a 600-square-mile desert valley that is home to about 500 people and numerous coyotes and rattlesnakes. He also purchased a small airport, Amigos del Cielo, located about a mile from his property. There, he constructed four hangars and formed a compound of vintage Airstream trailers to lodge pilots, instructors, and students. He also divided part of the land into 10-acre home lots.

Then he went to work building his Sky Gypsies network of facilities, each of which would be separated by 100 to 200 miles, no more than a day’s flying. McAfee and his girlfriend, Jennifer Irwin, spent 17 weeks exploring the Southwest backcountry in a Hummer, scouting for sites. Kemmeries flew a kitewing between all of the sites, mapping out aerial trails that stretch for hundreds of miles.

McAfee says that so far he has spent close to $12 million on the project. Besides the base at Rodeo, he maintains a second headquarters at La Cholla, Ariz., which is near restaurants and supermarkets. He set up other facilities in Arizona at Kansas Settlement, Pleasant Valley, and Rimrock. In New Mexico, he created sites at Deming, Truth or Consequences, and the Plains of San Agustin. McAfee built some facilities from scratch, while others were small airfields that he modified. All have at least food, fuel, a runway, a hangar, and a place to stay overnight. The network can sustain two to four weeks of backcountry flying, and McAfee says he plans to expand it.

He also wants to ensure that nobody becomes bored if it is too wet or windy to fly. To that end, the Amigos compound includes an Internet café, a 50-seat movie theater with a library of thousands of DVDs, and a community greenhouse. A squadron of four-wheel, all-terrain vehicles is available for fliers who want to explore on the ground instead of in the air. A staff at the main house fixes two meals a day; a dozen mixed-breed dogs provide company; and a swimming pool is under construction. McAfee plans to upgrade all the facilities in a similar fashion over the next couple of years.

Access to the network is on a membership basis. “Anyone can come here to visit,” says McAfee. “They can arrange with the instructors for lessons, and if they want to become a Sky Gypsy, it’s decided by consensus.” Memberships begin at a rate of $1,000, which provides access to the Rodeo facility for a week. A premier membership, at $270,000, gives you access to all the airfields and facilities for a year, including loaner cars and recreational vehicles.

All Sky Gypsies agree to two rules: They will abstain from drugs and alcohol while aerotrekking, and they will be careful, responsible pilots. “When you’re flying with other pilots at 90 miles per hour, 15 feet off the ground, you have to trust that they’re clearheaded and won’t do something stupid,” McAfee says. “This sport is not for everybody.”

The members are well aware that their sport can be dangerous. Several Sky Gypsies bear the scars of bad landings, and last November, McAfee’s 22-year-old nephew was flying with a passenger when something went wrong. “We still don’t have a clue what happened,” McAfee says. “He was a good pilot. The weather was clear, and another pilot was flying nearby and reported no problems. A witness said he saw the aircraft spiral down out of the sky, and it crashed in a canyon.” Pilot and passenger both were killed.

But serious crashes are rare because the Sky Gypsies are not daredevils. They are meticulous in their preparations and pleased by the multiple protections built into their favored kitewing, the Air Creation Tanarg. “The Tanarg is the first kitewing that was designed the way they design airplanes at Boeing,” Kemmeries says. “With older kitewing models, if you flew and nothing broke, you were surprised and happy. Now it’s the opposite: We’re used to expecting everything to work perfectly all the time.”

The Tanarg’s skeleton is constructed of welded stainless steel with an outer fuselage of strong, lightweight composite materials. The seats and controls adjust to accommodate pilots from 5 feet tall and 100 pounds to 6 feet 7 inches tall and 300 pounds. Onboard storage space is plentiful. “We always bring a fresh-baked loaf of bread and tuck it by the engine to keep it warm,” says Kemmeries, showing me a baggage compartment behind the rear seat.

A basic Tanarg costs approximately $85,000, but a version equipped for aerotrekking runs $150,000 to $200,000. This aircraft features off-road tires and suspension, dual controls (for piloting from the front or back seat), and a parachute that can lower the aircraft to the ground in an emergency. It also has a GPS navigation system, radio and transponder gear for communicating with air traffic control, and electronics that supply power to heated suits for winter flying. The Federal Aviation Administration certifies the Tanarg as a Light-Sport Aircraft. A flier starting from scratch, or transitioning from a fixed-wing plane, usually can master the Tanarg and earn a sport pilot’s certificate with a week or two of training. Once a member, a pilot qualifies for a tattoo of the Sky Gypsies logo, a stylized set of wings.

It is not long past dawn in Rodeo when the Gypsies gather to fly again, eager to catch a break in the swirling thunderstorms that have been lingering in the valley. They pull the kitewings out of the hangar and carefully check each one. Then they don helmets and headsets, joking and laughing. Each pilot straps in, calls “Clear!” and taxis to the runway. Today I am flying with Bruce Thompson, a genetic scientist and amateur archaeologist, who is going to give me a lesson.

When Thompson presses the throttle, we make a short ground run and then rise. Neil Bungard, a veteran instructor from Kemmeries’ flight school, takes off behind us. Paul Grignot, a retired fighter pilot from Florida, follows Bungard. Jennifer Irwin, who is practicing to qualify as an instructor, takes a position above the pack, keeping an eye on everyone’s location. Kemmeries and McAfee separate from the group, heading down a canyon for a photo shoot.

Thompson and I dip down low, close enough to the ground to smell damp mesquite. He peers at the desert, looking for signs of the past. He has mapped much of the area’s history on his laptop: old railroad tracks, abandoned airfields, remnants of Native American settlements.

We climb to about 500 feet, and I try my hand at piloting. The controls feel awkward at first, different from an airplane’s: To turn right, you push the control bar to the left. We fly a few circles, using a cattle pond as a reference point, and I quickly get the hang of it.

Turning north, we spot two kitewings flying out of a canyon in the western mountains. In the distance, a long rooster tail of dust follows a pickup speeding down a dirt road. We spot cattle grazing, and horses turn to watch us. For a couple of hours, we dip and climb, turn and play, feeling the wind and becoming part of it.

The group lands for breakfast, and then we drive the all-terrain vehicles to one of McAfee’s favorite spots. We bump over dirt trails, through mud and stiff desert grass, past longhorn cattle and jackrabbits. At the base of an outcrop we park the vehicles and follow a ragged path, stomping our boots to alert rattlesnakes. Then, at the edge of a formation of red rocks overlooking the valley, McAfee shows us petroglyphs painted on an overhang. Beneath them, in a rock shelf, we find deep holes that Native Americans presumedly used for grinding corn some 3,000 years ago.

Later in the day, Kemmeries takes me up for a final flight. Cruising along the ridgelines, we pass crannies and caves in the rocks. Agave plants stand along a ridge like a line of antennae. We see the wide, empty floor of the valley to the east, gleaming in the desert sun, and another range of mountains 100 miles away. Then, at 3,000 feet, Kemmeries pulls the throttle and the engine goes silent. We glide downward in a wide, lazy spiral, riding the wind, until we line up with the runway and slide back to earth, just like a bird.