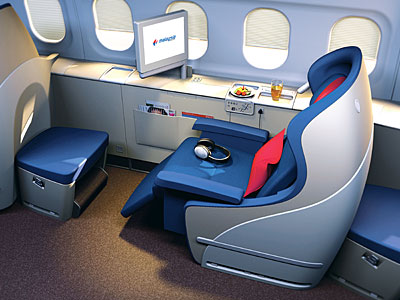 You settle into a mini-suite, secluded by privacy barriers and flanked by mahogany-trimmed consoles. After cocktails and a four-course meal—perhaps with a dinner guest sitting on a separate, fold-down seat—you watch one of more than 100 on-demand movies on a widescreen video unit, or take advantage of the high-speed Wi-Fi service. When you become sleepy, you convert your chair into a lie-back sleeper—with a duvet and oversize pillow—close your eyes, and think, perhaps this trip will not be as tedious as you had feared.

As world travelers know, this scenario is common aboard the flights of many Asian, European, and Middle Eastern carriers, but it rarely occurs in the first-class cabins of American airliners. Skytrax, the air-travel advisory group and online airline-review forum, gives a perfect, Five Star quality rating only to Singapore Airlines, Cathay Pacific, Malaysia Airlines, and Qatar Airways. This year, after tallying millions of votes, Skytrax announced 14 awards in categories ranging from cabin staff to in-flight entertainment: Nine went to Asian carriers, five to Middle Eastern or European ones—and none to U.S. airlines.

On overseas routes, all players must maintain a reasonable level of competitive vigor, but few intercontinental passengers would describe their premium-class experience aboard U.S. carriers as comparable to those offered by, say, Emirates or Virgin Atlantic. On U.S. domestic flights, the distinctions between first class and economy are at times academic, often involving little more than extra legroom and a predeparture soft drink from a plastic cup.

This was not always the ca­se. But as air travel in the United States has grown affordable for virtually every segment of the population, service has been dragged under—not necessarily by thin profit margins, but by low customer expectations. The U.S. airlines have not lost their ability to support a better service culture, but most passengers, traveling on rock-bottom fares, do not demand it. Elsewhere around the world, however, airlines must spend more on comforts and amenities because the majority of their customers will not accept anything less—or so notes James Boyd, spokesman for Singapore Airlines, a company that probably has garnered more service laurels than any other.

“We now serve 10 cities in India, and we’ve learned that our Indian customers are the most demanding and exacting of all,” says Boyd. “We ignore their expectations at our peril.”

An airline’s competitive environment also can influence the level of service it provides. “We started business in a region already dominated by good airlines,” Boyd observes. “To succeed, we’ve had no choice but to offer a consistently superior product.” With a home-base population of fewer than 5 million—no greater than that of a large American city—Singapore Airlines, much like Dubai-based Emirates, another perennial service leader from a small country, is less the carrier of a specific nation than an airline of the world at large. Satisfying customers across many geocultural boundaries requires attention to detail and constant innovation.

American carriers, by contrast, play to a different audience. “Our entire cause-and-effect really doesn’t compare,” says Ron Cole, vice president of in-flight services for US Airways. “Our business-class product, for instance, is what it is because that’s what the American consumer is willing and able to pay for. It may not be the best in the world, but for our needs and expectations it works fine.”

Research by Northwest Airlines supports the notion that customers have different desires based on the length of their journeys. “People on short-haul flights are more interested in moving through the airport as expeditiously as possible,” says Northwest spokesperson Jennifer Bagdade. “On long hauls, they’ve indicated that comfort and amenities are the key, so we’ve made the investment there with lie-flat seats and in-flight entertainment.”

But it sometimes seems as if American airlines are asking to have things both ways, claiming that there is no need for an exemplary product while also lamenting a precipitous drop in premium-class revenues. “For the U.S. majors, the reality is clear,” says Peter Miller, marketing director at Skytrax. “Poor revenues in the forward cabins are wholly attributable to the poor product they provide. Simply replacing some seats is not going to bring forth the expected changes.”

Obviously, an airline’s fiscal health can affect its service. Soaring fuel costs and relentless competition from low-fare opportunists such as JetBlue and Southwest continue to wreak havoc on the old-guard American carriers. Not surprisingly, the two Stateside mainstays that appear most frequently in the ranks of service leaders—Continental and American—are among the strongest financially.

The U.S. slide commenced well before any ongoing fiscal woes, however. The origins lie in the 1980s, following the Airline Deregulation Act of 1978, when airlines became disoriented by the massive changes in a deregulated skyscape. They grew obsessed with frugality and focused not on their own products but on finding ways to undercut everyone else’s. It was a tectonic shift from a service-oriented industry to one ruled by the dictum of “cheaper, smaller, faster.”

In addition, as Skytrax’s Miller notes, “U.S. airline management structures became top-heavy during this period, and they were not alert to the longer term.” Increased aircraft utilization played a part as well. “There’s no excuse for a shabby presentation,” says Cole, the US Airways VP. “But with a half-hour turnaround, it’s tough to get a cleaning crew in a plane to pick up every paper and polish every tray.”

Travelers with the means to do so can migrate from U.S. airlines’ first-class cabins to private aviation. “Two factors have driven the acceleration of programs like ours,” notes Steve Hankin, CEO of Sentient Jet, one of the United States’ leading charter operators. “First is what I call the ‘productization’ of private jet travel. Ten years ago, concepts like ours were all but invisible. Now we have an established presence and have optimized our model. People see just how easy and risk-free private flying can be. Second, yes, has been the deterioration of the airlines. By comparison, Sentient Jet clients tell me that their vacations begin not when they reach their destination but the moment they step aboard one of our planes.” (Tellingly, Hankin came to Sentient from Starwood Hotels—a hospitality company—rather than from another aircraft company.)

In addition to private aviation providers, the U.S. carriers now also have to contend with Eos Airlines, which has entered the fray by offering all first-class flights between New York and London, and another newcomer, MaxJet, which covers the East Coast–London route with all business-class flights.

U.S. commercial carriers apparently are responding to the competition for premium-class passengers. United Airlines has launched a Premium Service promotion that includes sleeper seats on some domestic flights, and it also has added a first-class section to some of its regional jets. Northwest claims that the comfort of its new World Business Class exceeds what many international carriers offer. And American Airlines has begun outfitting international 767s and 777s with lie-flat sleepers in business class.

These improvements may constitute a case of too little, too late. “Only now are U.S. carriers waking up to the fact that an outdated product doesn’t work,” says Skytrax’s Miller. “Many high-revenue passengers already have lost confidence.”

Meanwhile, carriers in Asia, the Middle East, and Europe continue to upgrade their services. For example, every seat in Singapore Airlines’ long-haul fleet now includes per­sonal entertainment units with 500 choices of on-demand audio and video. As they improve their technologies, the world’s elite airlines have touched off an arms race in gadgetry and in-flight theater. “That’s great for them,” counters US Airways’ Cole. “But on a six-hour flight from the East Coast to London, that’s beyond what our passengers want and are willing to pay for. As it is, we have no trouble filling the front of our airplanes.”

In other words, the airline is meeting its customers’ expectations.