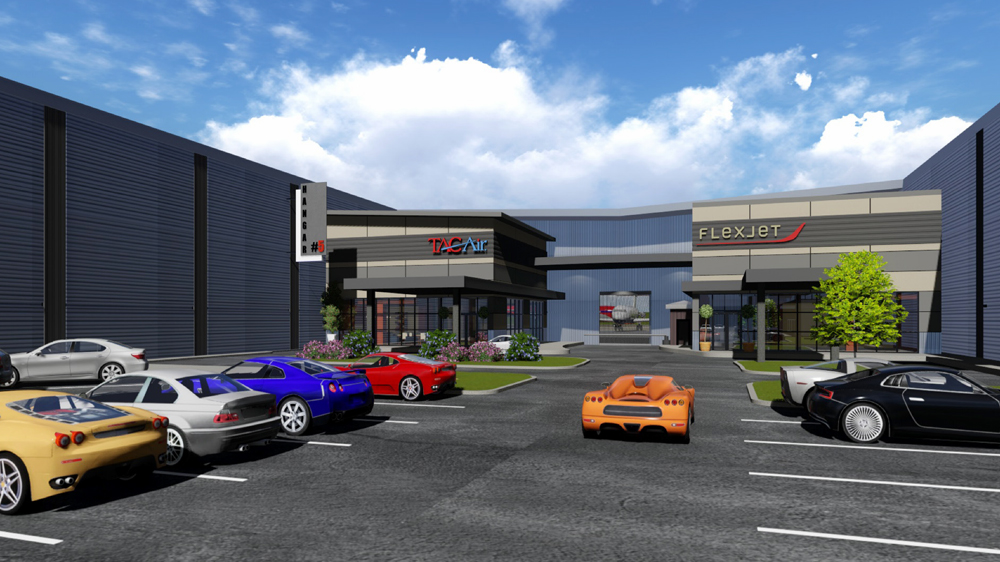 The fractional jet ownership company Flexjet has announced plans to open a new private terminal in the Braniff Centre at Dallas Love Field. In addition to a terminal exclusively for Flexjet customers, the facility will feature covered parking, 32,000 feet of office space for Flexjet staff, and 60,000 square feet of hangar space for Flexjet’s maintenance operations, which are presently located in Addison, Texas.

The design of the terminal’s interior has not yet been finalized, but it will most likely resemble those of Flexjet’s other three private terminals, at the airports in Naples and West Palm Beach, Fla., and at Westchester County Airport in White Plains, N.Y. Each of those features a lounge, conference room, private work spaces, and Wi-Fi access. (Flexjet is planning to open a private lounge in the new terminal being built at Scottsdale Airport in Arizona.)

The Flexjet terminal in Dallas is scheduled to open in June 2019, when the rest of the Braniff Centre is complete. Flexjet staff are expected to move into the new office space in late fall, relocating from the company’s offices in Richardson, Texas. The headquarters for Flexjet, which has been in business since 1995, will remain in Cleveland, at the Cuyahoga County Airport.

The Braniff Centre, a redevelopment project based around the renovation of the former Braniff International Airways facility, will encompass 26 acres and include a total of 200,000 square feet of hangar space. In addition to the Flexjet terminal, offices, and hangar space, the Braniff Centre will house the aviation-service company TAC Air, retail shops, restaurants, other offices, an auto-dealer showroom, entertainment venues, and hospitality facilities.

The Braniff facility was billed as the “Terminal of the Future” when it opened in 1968, in part because it was going to feature the Jetrail, a fully automated suspended monorail that would transport passengers from remote parking lots to the terminal. The Jetrail operated with great success from 1970 until 1974, when Braniff relocated to Dallas/Fort Worth International Airport.

Flexjet opened its first private terminal in 2016 in Naples. The Westchester terminal opened last year. Last fall, the company expanded the entrance to its hangar at Westchester to accommodate the Gulfstream G650; Flexjet took delivery of its first G650 late last year. The ultralong-range business jet is part of Flexjet’s Red Label program, which includes only late-model aircraft with unique interior designs (the LXi Cabin Collection), and flight crews who are assigned to specific aircraft. Other aircraft models in the Red Label fleet include the Bombardier Challenger 350, the Embraer Legacy 450, and maybe eventually the Aerion AS2 supersonic business jet.