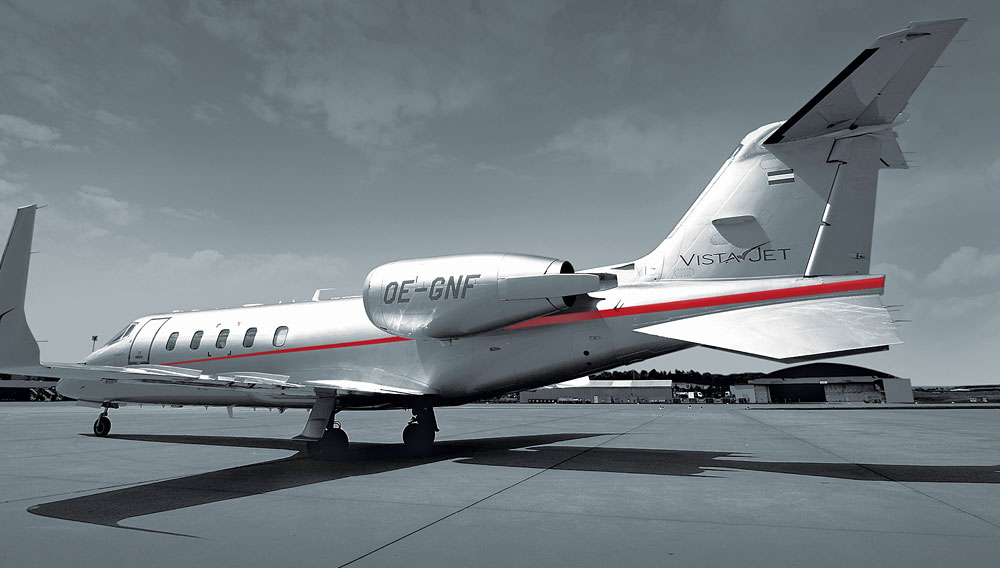 Few, if any, flight-service providers have come out of the recession unscathed. Indeed, a number of once-thriving companies have shut down or minimized their operations (See “Two Sides to the Story,” page 30). But the good news for clients and prospective clients is that the companies that have survived are investing heavily in new aircraft and have added programs or refined their existing programs to make them more appealing. Here we spotlight some of the influential companies—fractional-share, charter, and other service providers—that are updating, upgrading, or right-sizing their aircraft fleets or programs to better serve travelers now and in the years to come.

NetJets ✪ If a willingness to invest in the future is an indication of financial stability, then Berkshire Hathaway–owned NetJets is doing just fine. Through a $17.6 billion investment, the fractional-share provider plans to add up to 670 new aircraft to its fleet over the next 10 years.

In May, NetJets revealed that it would be the launch partner for Bombardier’s recently announced Challenger 350 super-midsize jet (see “Show Business,” page 10). In June of last year, NetJets ordered as many as 200 of the aircraft, which is expected to enter service by mid next year. The company also placed an order for up to 75 Challenger 605 large-cabin jets from Bombardier and as many as 150 of Cessna’s forthcoming Citation Latitude midsize jets. Those deals followed NetJets’ 2011 order for 120 of Bombardier’s ultralong-range Global jets and its 2010 order for 125 of Embraer’s Phenom 300 light jets, which have begun entering NetJets’ fractional fleet of Signature Series aircraft.

The manufacturers tailor the Signature Series aircraft for NetJets by including customized cabin layouts and amenities, entertainment systems, and avionics.

In addition to offering fractional-ownership and fractional-leasing options, NetJets provides on-demand charter and aircraft-management services through its Executive Jet Management subsidiary, and it provides private air travel through its 25-hour jet cards.

Last year, NetJets announced the launch of NetJets China, which recently began offering 25-hour jet cards for Chinese clients traveling in the United States and Europe, and is expected to begin providing on-demand charter and aircraft-management services within China by early next year. Here in the U.S., the company planned to open a private FBO in Palm Beach, Fla., in August, similar to NetJets facilities at airports in Atlanta and Van Nuys, Calif. NetJets also has existing private facilities in White Plains, N.Y., and Columbus and Cincinnati, Ohio.

Flight Options ✪ Flight Options has remained viable by giving its clients more choices, according to company founder and chairman Kenn Ricci. He says that prior to the recession, private fliers would make a sizable investment in one product—a whole aircraft, a fractional share, a flight card, or on-demand charter—that suited most of their needs. “But today’s buying public has become smarter,” says Ricci. “They might have a fractional share, and they might charter. Or they might charter and participate in a card program.”

In addition to its longstanding fractional-share and Jet Pass flight-card programs, the company now has its Jet Membership Club, which launched in June 2011 and has more than 100 participants. The program requires a one-time up-front fee, ranging from $70,000 to $270,000, depending on aircraft type and hourly commitment, which guarantees a base hourly rate for the three-year membership period. In 25- or 50-hour blocks, the program gives members access to the Embraer Phenom 300 and Nextant 400XT light jets in the company’s fleet. Both of these aircraft offer the comfort of larger jets but with lower operational costs. (Nextant is owned by the same investment group that owns Flight Options.)

Flight Options ordered 100 Phenom 300 jets in 2007 and has received 19; it ordered 40 400XT jets in 2010 and has received 12; and it plans to add Nextant’s recently announced 400XTi jets (see “Show Business,” page 10) to its fleet over the next three years. At press time, the company also had plans to add an unspecified super-midsize jet to the program in the near future.

Ricci notes that the new aircraft are among several perks of the program. “The document to enter the program is one page,” he says. “It’s so simple, especially when all you want is the convenience of private travel.” Ricci also notes that pricing for membership takes into account the up-front capital that members would be spending on an aircraft or fractional share and the depreciating values of those products, among other considerations.

VistaJet ✪ Like NetJets, Europe’s leading charter provider is making a sizeable investment in its fleet. Last fall, to help meet higher-than-expected demand from charter customers in Brazil, India, China, Russia, and other European countries, the Swiss company placed a $7.8 billion order with Bombardier, whose aircraft make up the entirety of VistaJet’s fleet.

The deal includes firm orders for 25 Global 5000 and 25 Global 6000 ultralong-range jets and six Global 8000 jets. The order also includes options for 86 additional Global aircraft. The new Global 5000 and 6000 jets are expected to enter the VistaJet fleet next year; Bombardier expects the Global 8000 to enter service in 2017. The performance and design goals for the Global 8000 include a range of approximately 9,000 miles, a top speed approaching 600 mph, and a capacity of 19 passengers. In June, VistaJet placed another order with Bombardier, worth roughly $1 billion, for 20 of its forthcoming Challenger 350 jets (with options for 20 more). Bombardier expects to begin delivering these jets by the middle of next year. The new Challenger and Global jets will significantly increase the size and capabilities of VistaJet’s current fleet of 50 aircraft, which includes Bombardier’s Challenger 605 and Challenger 850 large-cabin jets as well as Global 6000s.

While VistaJet does not offer point-to-point charter flights within the Unites States, it does offer on-demand charter to this country from just about anywhere in the world. VistaJet is also Flexjet’s partner for when Flexjet clients travel globally.

Flexjet ✪ The Bombardier-owned provider of fractional shares, jet cards, whole aircraft ownership and management, and on-demand charter will be the launch customer for the midsize Learjet 85, which is expected to enter service next summer. Flexjet will also be the launch customer for the light-midsize Learjet 75, and it plans to add the light-category Learjet 70 to its fleet; Learjet expects both of those models to enter service this year.

Flexjet, which reported an 83 percent growth in business this year, recently placed an order for two Bombardier Challenger 350 super-midsize jets. The company currently has nearly 80 aircraft in its fleet.

According to members of Robb Report’s Private Aviation Advisory Board, bias against single-engine turboprops has diminished in recent years. This shift has helped bolster PlaneSense (www.planesense.com), a fractional-share provider operating a fleet of 30 Pilatus PC-12 single-engine turboprops out of Portsmouth, N.H. Last July, the company began offering fractional shares in 50- or 70-hour annual blocks of time. Also, through its new Residual Value Assurance program, PlaneSense now gives its customers a safety net on the share value after five, seven, or 10 years from the start of the contract, should the owner wish to sell at those times….

Last December, the charter provider and aircraft management firm ExcelAire (www.excelaire.com), which operates FBOs in Chicago, New Orleans, and at its headquarters in Long Island, N.Y., began offering a private-jet-transfer service for commercial passengers traveling in the United States after landing at the John F. Kennedy International and Newark Liberty International airports….

Switzerland-based Jet Aviation (www.jetaviation.com) manages and operates an international fleet of more than 200 aircraft. In May, the company announced that it had added three new aircraft that are available for charter: a Europe-based Dassault Falcon 900EX large-cabin jet and United States–based large-cabin, long-range Bombardier Challenger 604 and Global 5000 jets….

Delta Private Jets (www.deltaprivatejets.com), a subsidiary of Delta Air Lines that was founded in 1984, introduced a fractional jet card last year, adding to the company’s traditional jet-card and charter services. For a minimum up-front purchase price of $25,000 and a $2,500 annual surcharge, fractional-card owners are guaranteed fixed rates for one year with no fuel charges or other fees, and they can use their cards’ funds for Delta commercial flights….

The Van Nuys, Calif.–based charter broker Jet Edge International (www.flyjetedge.com) has added a handful of jets to the 70-plus aircraft that its clients could already access, including Gulfstream GIV and GV ultralong-range jets. In May of last year, the company entered XOJet’s Premier Partner Network, and it has become the exclusive U.S. operator for the aircraft of Hong Kong–based charter provider Asia Jet….

Launched last summer, Clear Jet (www.clearjet.net) is an online network of top-safety-rated charter operators, which allows travelers to view quotes from multiple operators and book flights directly—and anonymously. Clear Jet members pay a flat fee of $499 per booking in addition to the cost of the flight, which is paid to the aircraft operator.