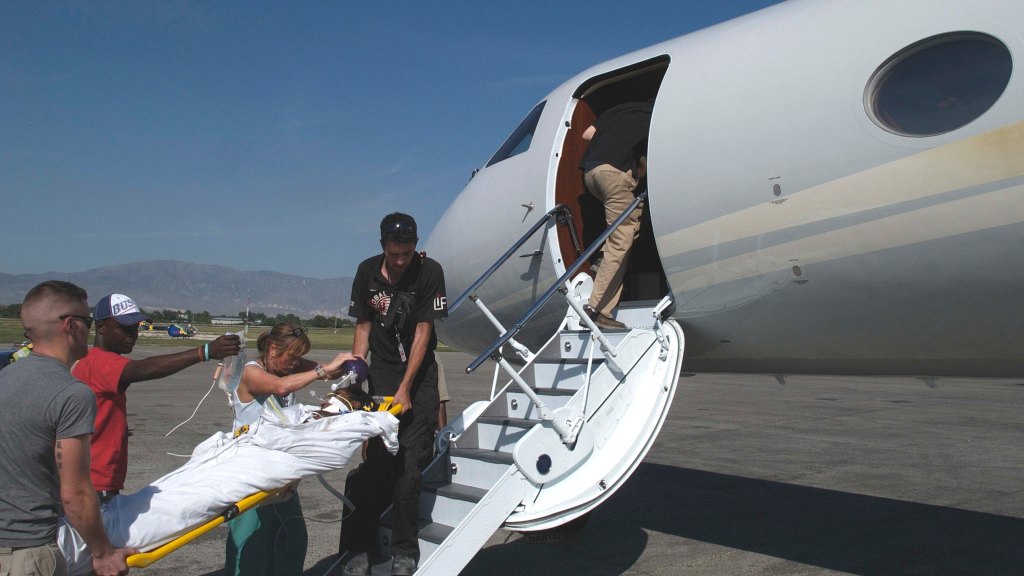 At the end of 2010, Barbara McLean was volunteering as a nurse at a clinic in Haiti, caring for people still affected by the earthquake that had struck 11 months before. Of all the patients in her makeshift intensive care unit, McLean was worried most about a 12-year-old girl named Reina who had developed Guillain-Barré syndrome, a debilitating autoimmune disorder that had become acute in the months after the earthquake. After an environmental disaster, toxic elements in the air and water can trigger severe illness months after the initial humanitarian aid has dissipated.

“An environmental disaster is a big ball of distress that rolls downhill and just gets bigger and bigger,” says McLean. “And it’s much harder to find humanitarian support with these secondary sequelae.”

After months of fighting the illness, Reina was immobile and her breathing stopped several times a day. McLean knew she wouldn’t survive or improve unless she got to a hospital in the U.S., so she spent weeks on the phone to find a hospital that would admit the girl and treat her at no cost. A hospital in Charlotte, NC, agreed, but there was still the matter of transport with no available ambulances and no flights that could accommodate a patient who couldn’t sit up and who would need constant in flight care. Someone at the clinic called Aerobridge, a U.S.-based nonprofit that coordinates flights of supplies, medical staff, and equipment to environmental disasters worldwide. It coordinated most of the donated flights to and from Haiti after the earthquake to bring thousands of doctors and tens of thousands of pounds of supplies to those in need. It also airlifted patients out in the months after the earthquake, and it was still active on the island.

Aerobridge tapped its donor network, and the day after Christmas found a family in the U.S. who would donate the use of their private Gulfstream IV for the trip on the sole condition that the family remain anonymous. “We would never have got her to the U.S. without this family’s incredible generosity, and I still don’t know who they are,” says McLean. “It was a beautiful aircraft, with leather seats and a flight attendant who was wonderful.”

Because the onetime use of a private jet is not a gift to be wasted, and because there was a cholera epidemic in Haiti at the time, Aerobridge loaded the Gulfstream with 4,000 pounds of water purifiers, chlorine tablets, and antibiotics for the flight to the Port-au-Prince airport. “We’ve got the triage down to an art,” says Alan Staats, who worked on the ground in Haiti on behalf of Aerobridge. “A lot of organizations use corporate jets to give seats to cancer patients for regularly scheduled flights. That’s wonderful, but it’s not what we do.” Reina was put in the back of a flatbed truck for the trip to the airport while McLean used a portable ventilator to keep her breathing as they waited for the plane to be unloaded and then brought her on board. Before they could take off, Reina’s heart stopped and McLean spent 45 minutes resuscitating, then stabilizing her, before giving the pilots the go-ahead to take off. That one flight helped save Reina’s life, and it helped dozens or hundreds of other people in immediate need of medicine and clean water.

General aviation has a long history of providing aid to patients and communities in need. Among the first responders to hurricanes Harvey and Irma were private pilots who loaded up their Cessnas, Pilatus, Mooneys, or Falcons with food, drinking water, and medicine, and were able to get in to small area airports before other aid workers could arrive. “During our response to Harvey, Irma, and Maria, we transported over 200 tons of supplies to the Keys, Puerto Rico, and the USVI, and moved several hundred first responders and evacuees,” says Staats.

But it’s never been easier for business aircraft owners to donate flights or flight time to people in need. Aircraft owners can contact Air Care Alliance, an umbrella organization for more than 60 organizations that provide flights for charity. Owners can fill out a form on ACA’s website to offer their aircraft for use by these organizations. Although most missions can be fulfilled by smaller aircraft, larger business jets can be an enormous resource because of their larger capacity and longer range, says ACA president and cofounder Rol Murrow. “If I was in any one of these organizations and a jet aircraft became available, I’d be thrilled,” says Murrow.

Organizations in Air Care Alliance need aircraft for every kind of public service, including transporting organ donors or getting recipients to a hospital where they can receive lifesaving surgery. They move adoptable pets to shelters. They respond to search-and-rescue missions and help conduct fish-and-wildlife counts for environmental organizations. And some flights give perspective to public issues. “We can help solve environmental problems from the air,” says Murrow. In 2002, a corporation petitioned to mine public land that had been the Villa Vidal ranch in New Mexico. Volunteer pilots took media members and legislators on a flight to survey the area using donated aircraft. The ability to see the area from the air allowed legislators to get perspective on the importance of the land. Ultimately, the petition was rejected.

But by far the biggest need is getting patients to medical care. A number of regional organizations operate under the name Angel Flight. Most of them fly any type of medical patient to or from treatment and the patients pay nothing because all of the flight time and aircraft are donated by owner/pilots. For those who participate in fractional programs or own larger aircraft, the best way to get started with philanthropy is to contact Corporate Angel Network, a nonprofit that pairs cancer patients with corporate aircraft owners who have an available seat on a scheduled flight. CAN was founded in 1981 and has become the go-to charity for Fortune 500 and 100 companies looking to donate flight time. Even fractional owners can donate flight time through the giving desk of their fractional organizations.

Reina flying out on the plane.  Photo: Alan Staats/AERObridge

The organization has flown more than 54,000 patients to date. To be eligible for flight, patients have to be able to walk up the steps of an aircraft and fly without needing medical assistance. They must also be traveling to or from treatment at a recognized cancer center, but patients can fly as many times as they need to. One child who was diagnosed at age 2 has flown 14 times with CAN to get treatment. She is now 8 years old.

Once an owner has registered with the network, CAN requests information about the aircraft’s schedule and then tries to match available seats with patients in need. “What I like to highlight is that as an owner, you have the right to refuse any flight after you enroll in the network. You aren’t committing to anything beyond seeing if a flight works for you,” says Gina Russo, executive director of CAN. She stresses that the aircraft owners don’t feel the need to host the patients flying with them. “Some do say hello to the patients and want to get to know them. Others use their flights for business and want to give patients their privacy. We are so grateful to our donors, and I don’t want them to feel that they have to host our patients,” says Russo.

CAN is especially important for patients who live in rural areas far from large cancer centers where they can get adequate testing or a second opinion. CAN coordinates multileg flights for these patients with more than one donor to make these trips happen. “With so many new therapies coming out, you want the right person to weigh in on your condition. I’m a big believer in that. If a patient in Wyoming or Montana needs to see a specialist or get a second opinion so they can get the right diagnosis, we want to get them on a flight,” says Russo.

Transporting ambulatory cancer patients is perhaps the easiest way to get started with philanthropic giving, yet there is no shortage of need for flight hours to help others. A string of hurricanes has brought increased awareness in the need for disaster relief and the need for flights to and from disaster areas, which is the specialty of Aerobridge. The NBAA has its own disaster relief clearinghouse, called the Humanitarian Emergency Response Operator (HERO) database. Here aircraft owners can volunteer their aircraft and crew to provide relief to humanitarian disasters worldwide with the understanding that the aircraft may be landing on short or unpaved runways and that communication, maintenance, and other resources may be scarce on the ground. Aerobridge works closely with NBAA to find owners of business aircraft who can help provide these necessary flights. They have provided relief after Harvey, Irma, and Maria. “We use everything from small Cessnas to Falcon 900s,” says Staats. They move generators, medical supplies, tents, meals, fuel, and tens of thousands of medical personnel. All the supplies are donated and so is every flight. “We don’t collect manifests,” says Staats. The priority is getting resources in with efficiency and getting the injured out. As the disasters pile up, Staats says that what they need is donors who are standing by. “The more people we know, the more rapid our response is going to be.”

Contact these organizations to find ways to donate flight services to a good cause.

Air Care Alliance Umbrella organization that works as a clearinghouse for regulations on volunteer flights and on pilots and aircraft available for public service missions.

Angel Flight is a group of regional organizations that provide air transport to patients.

HERO Network  is the branch of NBAA that coordinates interested business aircraft owners with humanitarian efforts in need of flight services.