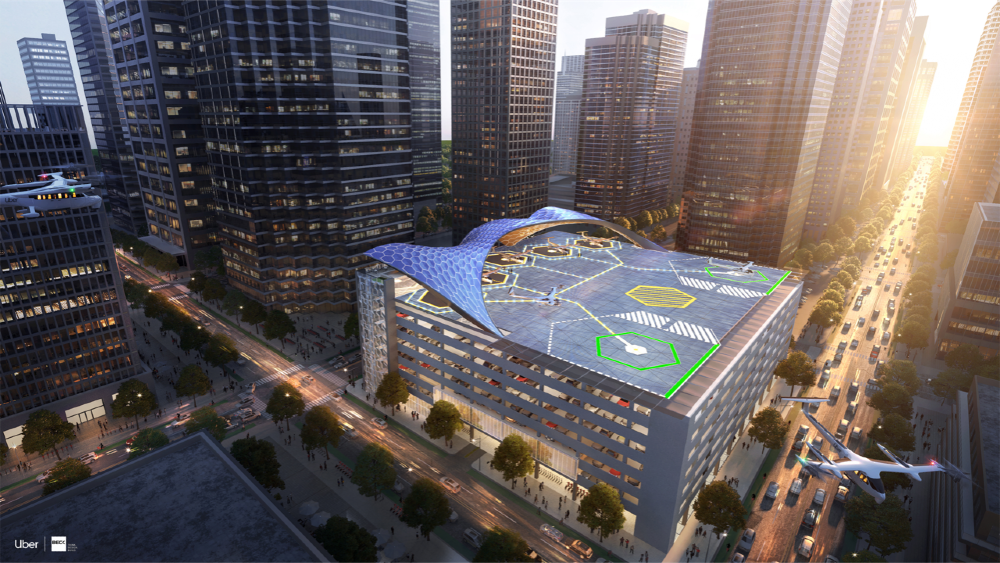 Our flying-car future inches closer every day. More that 200 electric virtual takeoff and landing (eVTOL) aircraft were in development as of 2019, according to the Vertical Flight Society. While these electric aircraft promise to liberate urban travel, what gets less attention is how they will integrate into urban life. In other words, once you have the machines, where will they take off from, land and recharge?

It seems like a simple question, but it cuts to the heart of how eVTOL aircraft will function. Right now, most companies are pursuing one of two business models: an around-town taxi service aimed at commuters, or a city-to-city service for regional travelers. (Private ownership is a third model but will likely be a small market at the outset.) The taxi approach, championed by heavyweights such as Uber Elevate and Hyundai, envisions multiple vertiports at key spots around each city.

Uber Elevate is shooting to begin service in LA, Dallas and Melbourne, Australia, at some point in 2023. “If you look at LA, we envision three to five vertiports at the start, but over time, that could grow to 15 or 20,” Nikhil Goel, co-founder and the head of product, told Robb Report.

While many eVTOL manufactures foresee landing sights in downtown areas, Transcend Air believes waterfront areas would be the ideal spaces for vertiports.

To maximize efficiency, the vertiports need to be near other types of transportation hubs or popular destinations. That is why Uber is using a data-driven approach that models how people move now from its ground service to determine the optimum locations for the Skyports. It is feeding those proprietary insights to development partners, who may either already have holdings in key locations or could pursue acquisitions.

“We’ll do all this in partnership with cities because we don’t want to be an imposition,” Goel notes. “Any new Skyport will go through an intense community review process. We need to prove it will have minimal impact.”

The city-to-city model projects less frequent flights, which will then affect its infrastructure needs. Lilium, a German company, recently unveiled plans for three-part structures (landing pad, parking bays and terminal) that are modular in design, so they can be arranged to fit a variety of footprints and scaled to purpose and space.

“We should only need two or three vertiports per large city to support an effective network,” Oliver Walker-Jones, the company’s head of communications, told Robb Report. “In that situation we’re confident we’ll be able to find locations that are suited to our operating model, useful for consumers but are also well placed to minimize any local impacts.”

Massachusetts-based Transcend Air Corporation, another city-to-city operator, which is already selling tickets for a 36-minute New York-to-Boston hop, plans to employ an underutilized resource in many cities: the waterfront. Its vertiport floats into place and then gets raised above the surface, making it easy to install and place in convenient spots near city centers. “We have a saying, ‘never loud and low over people,’” COO Peter Schmidt told Robb Report. “By being on the water, we’ll mitigate noise and safety concerns. Our design is practical, safe and environmentally sound.”

Regardless of the commuter model, the idea of so many companies operating flights in, out and around of any given city, with each coming and going from its own vertiports, can quickly create visions of air-traffic insanity.

Uber Elevate also believes in scaling vertiports to different urban settings. Plans for its Dallas hub include both new construction, such as this one in Corgan, and refits on existing buildings (lead image).  Uber

City governments may have to limit the number of operators or vertiports, or require eVTOL companies to develop a handful of quasi-public vertiports—perhaps above bus or train stations, or on other city lands, in order to ensure safety.

“We’re likely going to see some mix of public-private development,” says Schmidt. “US cities don’t have the money to do it on their own so they’ll have to partner with developers who will want a piece of the pie to earn back their investment.”

Walker-Jones takes a similarly wholistic view of the cooperation that will be needed to make the system work. “Manufacturers have an important role to play in ensuring the design of vertiports matches our operational requirements,” he says. “Whether we end up building and operating them is a different question – there will need to be an ecosystem of different players to support eventual operations.”