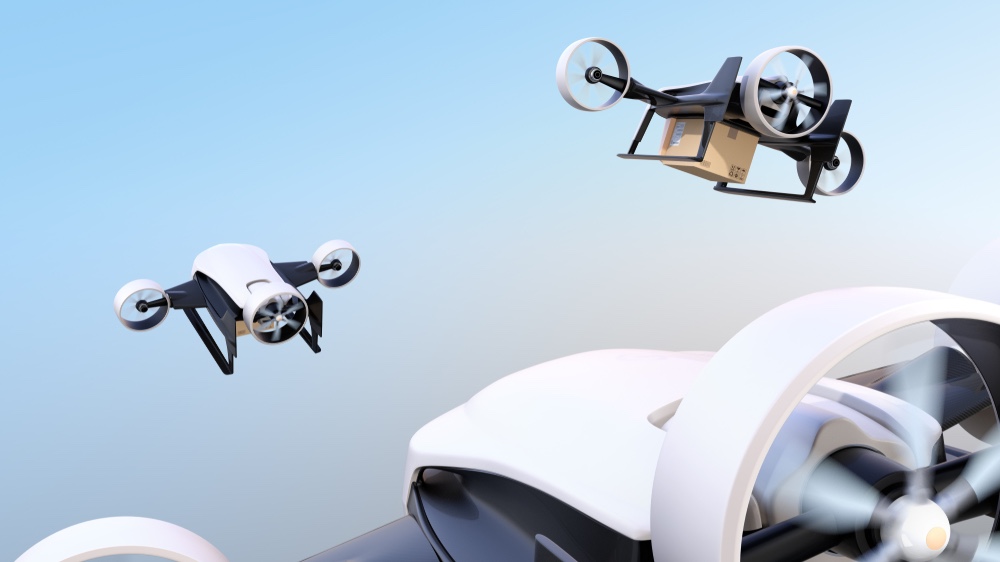 If Silicon Valley insiders have it their way, that could be the scenario a mere two decades from now when flying cars will not only be a reality but also a multitrillion dollar industry. (And you thought self-driving cars were the future of transportation!)

Turns out that while you’re reading an iPad in your Tesla as it drives you to Barneys, the real news will actually be flying around overhead. According to analysts at Morgan Stanley, flying cars are already turning into a big future business. Per Bloomberg, multiple companies are racing to get autonomous vehicles off the roads and into the air. But these flying cars won’t be moving people—at least, not at first. Instead, imagine the traffic-free air above cities as the new frontier for your next package delivery. Big companies that need to move a lot of product at a quick clip have begun beta-testing drones, and they envision fleets of self-flying VTOLs (vertical take-off and landing aircraft) carrying all sizes of freight without having to navigate pesky, Stone Age roads.

Google’s Larry Page, ridesharing app Uber, and Boeing are just some of the companies that are starting to invest money and brainpower into the technology. In their dream scenario, big rigs would be replaced with nimble, flying couriers, delivering your kids’ next Switches and VR sets like robot fairies. Think Blade Runner for Amazon Prime subscribers.

Analysts say that if the most fantastical estimates were to come to fruition, we could be staring down the barrel at a whopping $2.9 trillion global industry by 2040. Conservative estimates, however, say it could be somewhere in the paltry $615 billion range.

Meanwhile, this week, Silicon Valley enfant terrible Elon Musk is set to unveil the first part of his underground tunnel service, The Boring System, in Southern California. It seems that the world’s most intractable innovators can at least agree on one thing: traffic on the 405 blows.