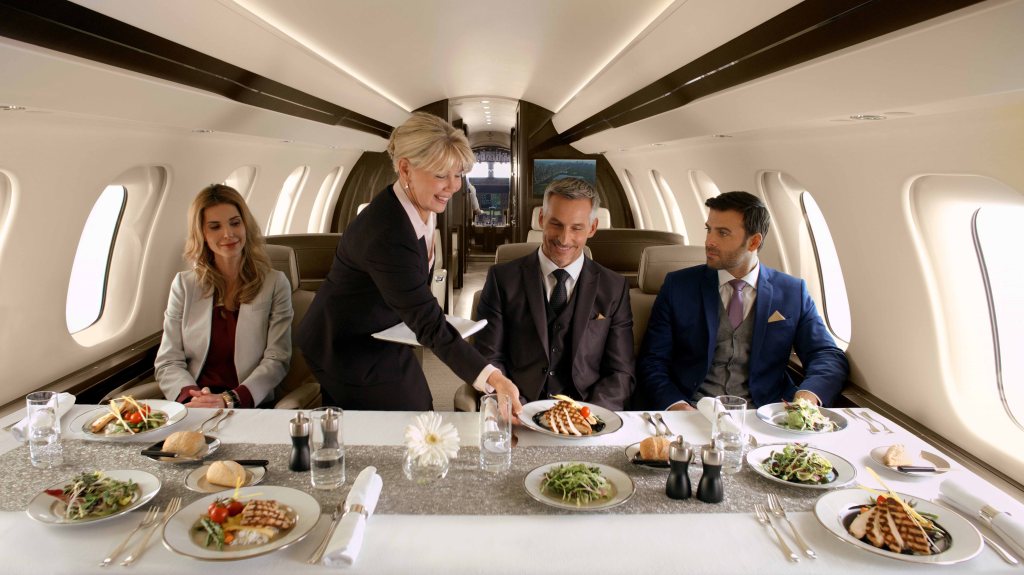 Above: Conference-suite dining aboard the Bombardier Global 7000, with comfortable seating for six.

When discussing the attributes of a good pilot, Adam Twidell, the founder and CEO of the England-based charter broker PrivateFly, places situational awareness at the top of the list. “It’s the ability to understand and control multiple sensory inputs, allowing you to predict what is about to happen to the aircraft before it occurs,” says Twidell, a former Royal Air Force and private-jet captain.

Situational awareness might be why so many pilots carry a bottle of Tabasco sauce in their flight bags—one of the findings from a survey of roughly 1,300 pilots that PrivateFly conducted in 2016: They’re anticipating that the food served aboard the plane is going to taste bland.

But the food is not the problem; it’s the circumstances. The high altitude, low humidity, reduced air pressure, recirculated air, engine and wind noise, and the overall oddity of sitting in a tube that’s 40,000 feet in the air can affect the way we perceive the taste of food and beverages, particularly wine.

Lower air pressure reduces your blood’s oxygen saturation, which in turn reduces the effectiveness of your smell receptors and thus some of your taste perception. Consequently, food and wine taste like they do when you have a cold.

The recirculating air in the cabin can further hinder your ability to smell the aroma of the food and the nose of the wine. “All the aromatics that would be present in front of you—the fresh herbs with caramelized vegetables, for example—they dissipate so rapidly. They don’t linger for your olfactory senses,” says Steven Roberts. He’s the senior vice president of global operations for Air Culinaire Worldwide, an inflight catering company based in Tampa, Florida, that operates 22 kitchens throughout the United States and four in Europe.

Roberts also notes the effect of low humidity on flavor perception. “In your house, typically you experience 40 to 45 percent humidity in the air,” he says. “In an airplane, it’s 20 percent or less. The dryness reduces the sensitivity of your taste buds, especially for sweet and salty food.”

Researchers at Munich’s Fraunhofer Institute for Building Physics, while studying airplane passengers’ taste perceptions for Lufthansa, found that when you’re flying at cruising altitude, your ability to taste salt is reduced by as much as 30 percent and your ability to taste sugar falls by as much as 20 percent. Both flavor perceptions are aroma based. Meanwhile, your perceptions of bitter and sour tastes remain relatively stable.

A more recent study by Cornell University’s Department of Food Science concluded that loud background noise, such as the type you encounter on airliners and some private aircraft, inhibits your perception of sweetness.

At the Fraunhofer Institute flight-test facility—a low-pressure chamber containing a 50-foot section of an Airbus A310-200—researchers also found that psychology as well as physiology can affect taste. For most passengers, flying is an unusual experience and an aircraft cabin is an unusual environment, and so your stimulus thresholds rise, requiring a stronger stimulus—in this case flavor—to trigger a response from your receptors.

Cabin noise and other distractions influence the beverage selections of Rebekah Wineburg when she flies. Wineburg is the winemaker at the Quintessa estate in Napa Valley. “In general, you want to stay away from any wine that’s known for being very subtle,” she says. “One of the great things about wine is that it’s not just about the wine alone; it’s the setting that you’re in. On a plane, you’re always going to be at least slightly uncomfortable, and I think that requires you to really focus on the wine to enjoy it. With a very subtle, very light wine, you would be asking too much of the wine and of you.”

Likewise, because of the noise and other factors dulling your palate, Roberts recommends avoiding subtle-tasting food, including anything that’s poached or steamed. “Poached chicken or poached salmon is going to have far less flavor than if it’s roasted or grilled,” he says. “Generally speaking, neutral-flavored foods—zucchini and squash or other vegetables that are simply steamed—don’t translate well in the air. It’s as much about the cooking technique as it is about the food product itself.”

One way to compensate for the reduced perceptions of salty and sweet would be to simply add more salt or sugar to a recipe, but that’s not the solution in the kitchens of Air Culinaire or for Eli Bensoussan. “Whatever spices would be used if you were serving the dish on the ground, it’s literally a pinch more of each,” says Bensoussan, the CEO of Vintage Caterers, an inflight catering company headquartered in Brooklyn that has a kitchen in Teterboro, New Jersey, and another in Van Nuys, California. “Just a pinch, because your taste buds still work. It’s not like they become completely numb. They’re just a little bit less sensitive when you’re at that altitude. So we add just one pinch more to make the dish a little bit more flavorful, to get it past that taste barrier that’s created by being at altitude.”

The Cornell study that found noise inhibits your perception of sweetness also discovered that it enhances your taste of umami, a savory flavor that some regard as the fifth taste—along with sweet, salty, bitter, and sour. The term derives from the Japanese word meaning “delicious” and translates to “pleasant savory taste.” Umami is found naturally in tomatoes, mushrooms, meats, and many other foods. It also can be added to food in the form or monosodium glutamate, better known as MSG.

In addition to using more spices in its recipes—including curries and garam masala—Air Culinaire also includes foods rich in umami on its menu. “There are a lot of foods that are naturally high in the umami flavor profile, everything from mushrooms to meat to legumes, olives, tomatoes. All these by themselves or in combination add flavor,” says Stevens. “We try to engineer our menu so that it’s rich in these umami foods.”

The presence of umami in tomatoes may explain why tomato juice and the cocktail that’s based on it are so popular among flyers—at least one airline annually goes through more tomato juice than beer. “When I was a little kid, it was Mr & Mrs T mix. Now it’s Bloody Marys,” says Wineburg. She notes that the taste profiles of some aged red wines, including Quintessa’s red blend, feature the savory umami flavor. “Quintessa could work well on a plane, because you have fruit and savory. And it if it’s aged, you’ll have these incredibly supple tannins. You’ll have some mouthfeel from the tannins, but you won’t feel bitterness.

“I always try to look for a wine that has both fruit and savory characters,” she says. “Something that has harmony, so that everything works together and will still show through on an airplane.”

Wineburg also might select a Chardonnay or other white with pronounced minerality—not a buttery Chardonnay—and she says she would avoid wines that are highly acidic or tannic, such as a young Nebbiolo. If Wineburg had a truly special wine, however, she might not open it on the plane. “If this was my one chance to have this wine,” she says, “I think I would wait and have it on the ground, where I can control the conditions.”

Certain foods—not necessarily special ones—also may be better suited to consuming when you’re on the ground. Pizza is one such food. “We absolutely don’t recommend it,” says Roberts. “You cook it, and then you have to chill it, so you’ve essentially ruined it from the beginning.” He explains how Food and Drug Administration regulations require that after an in-flight caterer cooks the food in one of its kitchens, it must chill it to 42 degrees Fahrenheit or colder before shipping it to the fixed base operator (FBO) where the jet will be taking off. The food then has to be reheated on the plane, which may have only a microwave oven or a galley oven that heats to less than 300 degrees.

“When you reheat the pizza, it’s going to be chewy or gummy,” says Roberts. “The crust will not be what it should be. But think about any time you have a pizza and put it in the fridge overnight and try to heat it again. Even if you put it back in a real oven, it’s difficult to get it right.”

If your flight is departing in the morning, sushi is another food to avoid ordering. “Just about every jet operator wants the catering in position at the FBO two hours before wheels-up time, because flight times can change,” says Bensoussan. “Your meeting ends early, so now you’re leaving early, and the catering has to be there.”

If you have a 9 a.m. flight, for example, the sushi and other food should be at the FBO by 7 a.m., which means, says Bensoussan, the caterer might have to acquire the sushi as early 5 a.m. Or if it prepares the sushi in-house, it has to acquire the fish by 5 a.m. “There are no quality sushi restaurants open at 5 a.m.,” he says, “and the fish markets aren’t open at 5 in the morning, so you’re buying the sushi or the fish the night before, and you could run into problems with raw fish that’s been sitting around for quite a bit of time. Also, when you have sushi sitting in the refrigerator for 12 hours, the rice absorbs the moisture from the fish, and it turns into a pile of mush.”

The good thing about sushi, from a caterer’s perspective, is that unlike other meals, you don’t have to reheat it on the plane before serving it. Bensoussan and Roberts both say that the pressurization in the cabins of newer jets, where it may feel like you’re at only 6,000 feet when the aircraft is traveling at 40,000 feet, doesn’t address the taste issues. However, the well-equipped galleys of the new large long-range jets can make it easier to prepare the food before serving it.

For instance, says Bensoussan, if someone orders a sirloin filet, which would be cooked at one of the caterer’s kitchen then chilled before being shipped to the FBO, it’s relatively easy to reheat it if the plane has a high-quality oven or an induction cooker. But it becomes challenging if the aircraft has only a microwave. “How do you put a filet in a microwave and still have it retain the texture?” he asks rhetorically. “How do you make it so it’s not rubbery?” As detailed in the instructions to the flight crew that come with the sirloin, you put the steak in a micro-container—which you place at the outer edge of the turntable so the steak doesn’t heat too quickly—and reheat it at 35 second intervals on the highest setting. “Every 35 seconds you check it with a gauge until you get the exact heat, depending on whether you want it rare, medium rare, or well done,” Bensoussan says.

He says caterers—and passengers—should be aware of another effect the cabin atmosphere has on your body, in addition to dulling some of your taste receptors. “Not many people know that once you’re up to about 30,000 feet, your metabolism works at only about 30 percent of what it normally does,” he says. “So that means if you have a soup that’s really heavy and cream based, you’ll feel pretty awful for the rest of the flight. You want to tone things down, so there are no heavy foods—no heavy creams—and the portion size has to be appropriate. Otherwise you’ll feel completely bloated, like you overate, and that can ruin the whole inflight experience.”

So, the ideal food for a flight is one that is light, easy to prepare, and, because it contains umami, remains flavorful when your taste buds are weakened. This may explain why, for at least one of the pilots in the PrivateFly survey, a must-have item for his flight bag is ramen noodles.