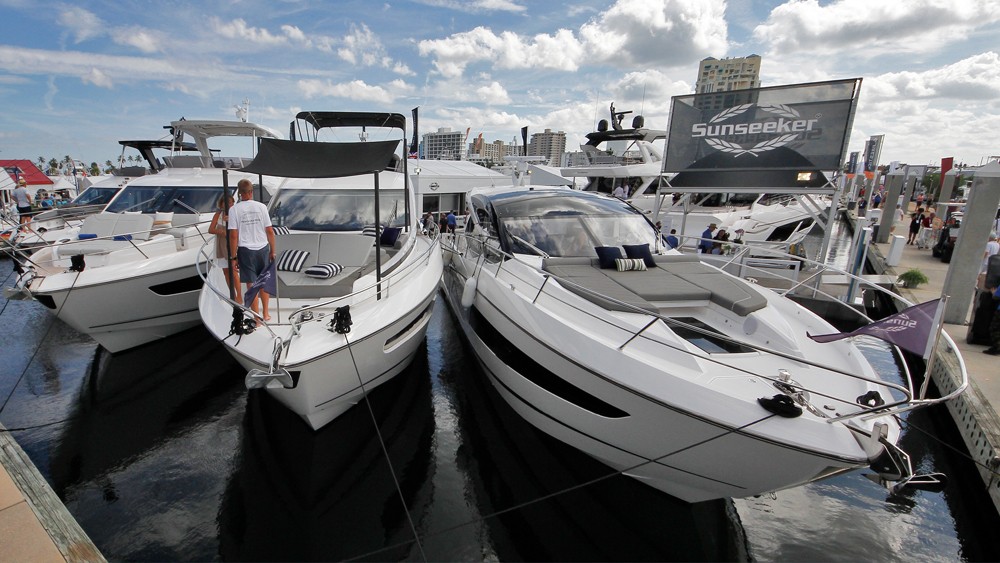 The number of superyachts in attendance was down compared to previous shows, and the presence of European boating executives was noticeably absent, largely due to the US-imposed travel ban on Europe set to expire on November 8.

“We saw a much smaller show than in years past,” Stefanos Macrymichalos, CEO of the International Yacht Company, told Robb Report. “But I think it was a much better event for those interested in purchasing or chartering yachts. We didn’t see people coming to the show for entertainment purposes.”

Still, there were plenty of showgoers taking selfies next to the larger superyachts, such as the 251-foot Boardwalk, the largest yacht in the show. But even the tiny number of visitors allowed to tour this custom Feadship, launched last January, was highly qualified. “We’re seeing a billionaire every few hours,” an executive of Feadship America told Robb Report.

Macrymichalos said that 2021 is expected to be a record year for his South Florida-based charter and brokerage firm, with multiple brokerage yachts in inventory having been sold and the number of charter weeks for its fleet up 35 percent for the year. “We’ve also seen a lot of charterers who now want to buy their own yachts making transactions,” he said. “It started in August 2020 and hasn’t stopped since.”

Fraser Yachts quoted similar double-digit increases in brokerage sales and its charter activity was up 58 percent in 2020 over the previous year. “Last year was one of our best years ever—we more than doubled sales over 2019,” said Michael Busacca, chief operating officer of Fraser Yachts, at a press conference. “We saw the biggest growth in the 24-to-34 meter [79- to 115-foot.] segment, with sales up 80 percent—and 40 percent of those were first-time buyers.”

On the first two days of the show, crowds were smaller than normal, but the weekend saw larger numbers of visitors.  Courtesy Howard Walker

Ocean Alexander’s 35R, which won Best in Show, attracted crowds wanting to see the new world premiere. Hull number one had been pre-sold, but the second hull was sold at the show. Prestige’s high-volume X70 was a show premiere, and the company said it would launch a new X60 next year, with a multihull in the works. The Ferretti Group had four U.S. premieres, including the Pershing 6X, Ferretti Yachts 1000, Ferretti Yachts 780 and Riva 88 Folgore.

Other builders reported strong sales even before the show. Federico Ferrante, president of Azimut-Benetti USA, told Robb Report its new Verve 42 had 14 sales before it even landed from Italy for its global FLIBS debut, while sister company Benetti’s Oasis 34M, which has not been completed, has attracted 20 orders.

The show had fewer superyachts on display this year, especially at the Superyacht Village, but headturners like Silver’s Bold were still at the docks.  Courtesy Silver Yachts

Italian yacht builder Sanlorenzo, which hosted a global launch of its SL 106A and US premieres of the SL96A and Bluegame BGX70, said it had doubled its sales in the US over the last 12 months. Sanlorenzo Chairman Massimo Perotti said that almost 50 percent of sales are to first-time buyers. “We see a lot of newcomers jumping into the business,” he told Robb Report. “Covid gave them a good reason to own.”

Perotti pointed to a 2019 Deloitte study of the boating market, which reported that only 3.0 percent of Ultra High-Net Worth Individuals own yachts. “I expect that number to be a bit higher by the end of this year,” he says, “but even if we can move it to 4.5 percent, that’s enough for a significant market change.”

Sunseeker’s Sean Robertson also pointed to the first-time buyers coming to the show. “The quality of this show is fantastic,” said the U.K. yacht builder’s sales director. Sunseeker had US premieres of its Manhattan 55 and 65 Sport Yacht. It plans to launch two to three models per year after the earlier launch this year of five models across four categories.

Most brokers and yacht builders reported buyers rather than tire-kickers.  Courtesy Howard Walker

The irony is that with the onslaught of first-time buyers, plus global-supply chain issues, yacht builders are scrambling to meet demand, with delivery times pushed out 12 to 36 months, depending on the model. “The used boat market is pretty much gone,” says Robertson. “At the earlier shows in Europe this fall, there was almost a sense of desperation among buyers of wanting to know what they could get. Now, people seem more willing to wait for what they want.”

This record feeding frenzy for new and used boats shows will continue, said most of the FLIBS exhibitors Robb Report spoke with. “Yachts seem to be one of the safest havens for people of wealth,” said IYC’s Macrymichalos. “But it’s not just people of wealth—it’s extending across the board, and there seems to be no signs of a slowdown.”