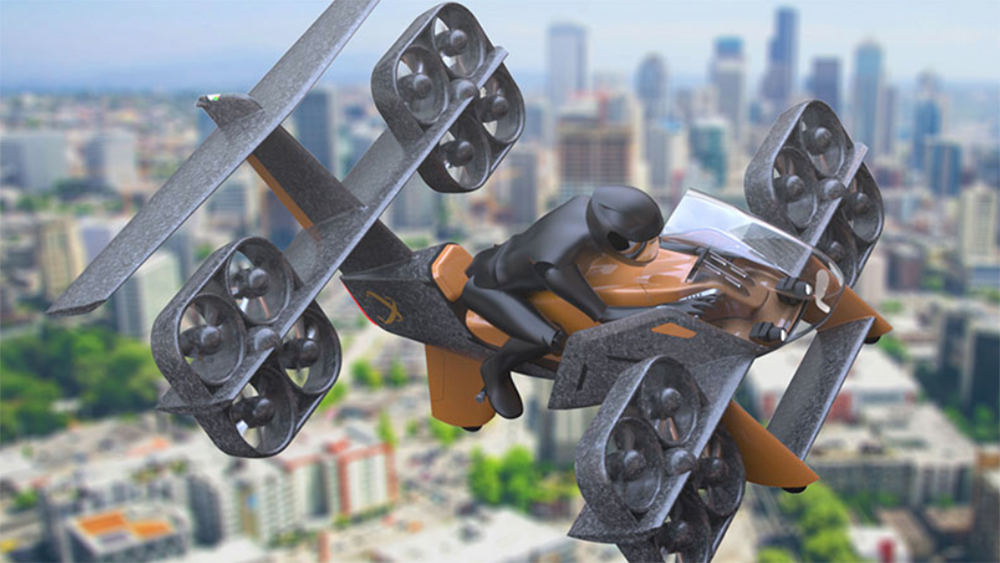 A Johnny-come-lately was among the five winners in Phase II of the GoFly Prize competition, a three-part, $2 million contest sponsored by Boeing that is challenging designers, engineers, inventors and other innovators from around the world to create a safe and easy-to-use personal flying device.

DragonAir Aviation, a team from Florida, missed the deadline last spring to compete for one of the 10 $20,000 prizes that were awarded to the contest’s Phase I winners, but its Airboard 2.0 impressed the GoFly Prize judges enough to win one of the five $50,000 Phase II prizes. The device is powered by eight motors, and the pilot, in a standing position, steers the Airboard by shifting his or her weight—as you would steer a hover board.

The DragonAir team drew inspiration from hydroflight, a competitive sport in which athletes maneuver on, among other devices, water-powered hoverboards. In developing the Airboard, lead engineer Jeff Elkins sought to combine the technologies behind hydroflight devices and drones. DragonAir’s team captain and test pilot, Mariah Cain, is a trained hydroflight athlete.

The GoFly Prize guidelines call for a craft that is ultracompact, quiet, urban compatible and capable of carrying one person for 20 minutes without refueling or recharging. The device also must have vertical or nearly vertical takeoff and landing (VTOL) capabilities. For Phase I, teams had to submit written technical specifications. For Phase II, they were required to present visual and written documentation of a prototype. The winners were announced in late March.

The contest will culminate in the first quartet of 2020 with a Fly-Off, during which each of the invited teams will show the judges how well their aircraft flies—with a human or dummy pilot on board. (DragonAir’s test pilot should feel safe. Airboard 2.0 is designed to continue flying even if as many as four of its eight motors give out. Also, it will be equipped with two parachute systems: one for the pilot and one for the device itself.)

The other Phase II winners, each of which will likely be invited to compete in the Fly-Off, include the ERA Aviabike, a tilt-rotor aerial vehicle developed in Latvia and Russia that combines the VTOL capabilities of a helicopter with the range and speed of a fixed-wing aircraft.

Another Phase II winner, the Silverwing S1, has a canard-wing configuration that accommodates a driver seated as though he or she were riding a motorcycle. It’s powered by two electric motors with ducted rotors. The aircraft, which was designed by a team from the Netherlands, can make a 90-degree transition from a vertical takeoff to a horizontal flight.

The other two Phase II winners, both from the United States, are Harmony, an all-electric, compact rotorcraft designed by a team at Texas A&M University, and FlyKart 2, a single-seat, electrically powered VTOL aircraft that features an open cockpit, 10 rotors and a ducted fan.