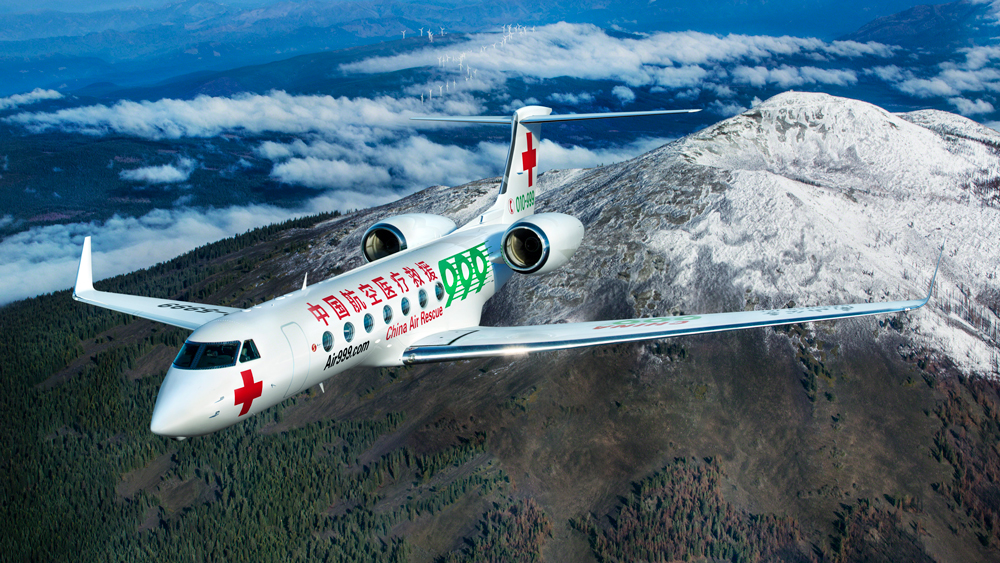 You can order an ultralong-range business jet with a fully equipped galley, a cinema room, and a bedroom that has its own shower—along with cabin lighting that makes the ceiling look like a starry night sky. There were even plans once to install a hot tub in an Airbus A-380 reconfigured for private use. Cool—or maybe in the case of the hot tub, crazy—as these features may be, none can help you if you suffer a serious injury or ailment, aren’t near a hospital, and need immediate medical attention. In those circumstances, you want a jet with an on-board medical bay. Through its Special Missions program, Gulfstream offers just such an aircraft.

In July, during a ceremony at Gulfstream’s headquarters in Savannah, Georgia, the company delivered a state-of-the-art medevac aircraft to the Beijing Red Cross Emergency Medical Center. The jet, a highly modified G550, will be used in China for disaster relief and air rescue missions. It features a medical bay outfitted with advanced equipment that the jet’s medical crew can use to stabilize and sustain critically ill patients.

In a first for medevac aircraft, the cabin is configured so that doctors and nurses have 360-degree access to the patient, meaning the examination table is positioned in the center of the cabin instead of against one of the walls. Other features include extracorporeal membrane oxygenation (an advanced life-support feature), a bed that can accommodate an infant incubator, X-ray viewing equipment, and refrigerated storage cabinets. The stairs of the aircraft are equipped with a powered gurney-loading system, and the cabin includes berths where the medical and flight crews can rest.

Gulfstream has operated its Special Missions program since 1967, initially modifying its business jets to serve as training aircraft for the U.S. Navy and as head-of-state and VIP transports. The company now builds versions of its aircraft for atmospheric research, airborne surveillance and reconnaissance, and maritime search and rescue, as well as VIP and head-of-state transport and medical evacuation. Currently, more than 200 Gulfstream aircraft in 39 countries are being used for special missions.

The G550, which has been in service since 2003 and has a range of nearly 7,770 miles (enough to fly nonstop from Beijing to New York), is a particularly popular platform for special missions. Last year, the Polish government took delivery of two G550s and is using them for head-of-state transport. Israel, Singapore and Italy are among the countries that use G550 jets for airborne surveillance. The U.S. Navy employs the aircraft for telemetry-range support, and a G550 performs high-altitude atmospheric testing for Germany.

Gulfstream provides around-the-clock product support for all of its jets, including special mission aircraft, and it offers training for the pilots, other crew members, and technicians.

According to Gulfstream, at the delivery ceremony in Savannah, Ga., the director of the Beijing Red Cross Emergency Medical Center expressed interest in ordering a medevac version of the G650ER, Gulfstream’s flagship. The company says it is prepared to accommodate that request.