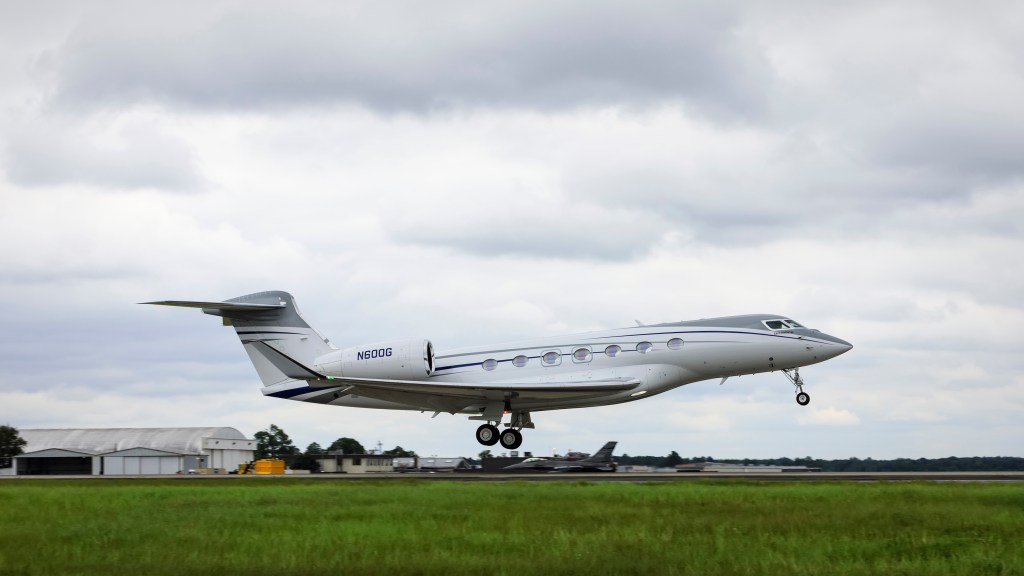 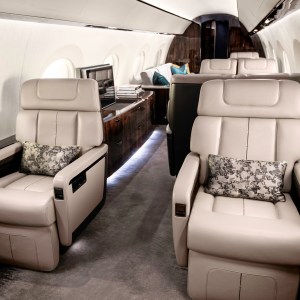 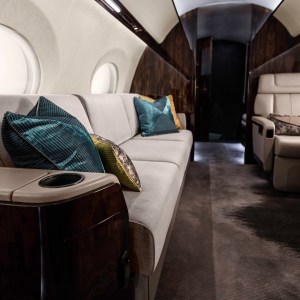 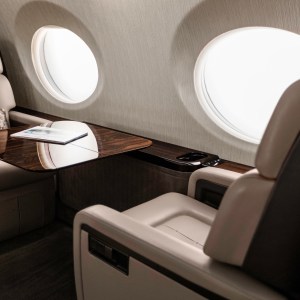 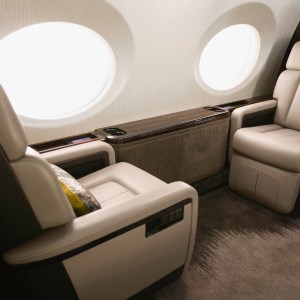 The fifth and final aircraft in Gulfstream’s G600 test-flight program—an aircraft outfitted with a complete interior—recently flew for the first time, giving the company a chance to begin evaluating the design and inflight performance of the cabin’s features and functions.

The cabin is just over 45 feet long. At 7 feet 11 inches wide and 6 feet 4 inches tall, it offers plenty of elbow room and headroom, and 14 large oval windows allow natural light to fill the interior and make it seem even more spacious. The cabin be configured to seat as many as 19 passengers, but a more typical layout divides the space into four separate zones that accommodate 12 or 13 passengers in 27-inch-wide reclining seats and divans that convert to sleeping berths. “The cabin is not quite as wide as the G650’s, but it’s wider than the original Gulfstream tube,” says Lee Rohde, the president and CEO of Essex Aviation Group and a member of Robb Report’s Private Aviation Advisory Board. (The cabin of the G650/650ER, Gulfstream’s flagship business jet, measures 8 feet 6 inches wide.)

Gulfstream offers a total of 10 configuration options, including ones with a full galley forward or aft and an owner’s suite with a shower. The cabin can be equipped with high-definition monitors, satellite communications, and internet connectivity. The cabin-management system enables passengers to use touchscreen devices to control the lighting, window shades, and entertainment options.

The cabin is quiet and continually supplied with fresh air, and the pressurization system makes it feel like you’re at only 4,850 feet when the jet is flying as high as its maximum altitude of 51,000 feet.

The G600, which is priced at $56.2 million, will eventually replace the G550, an ultralong-range aircraft that has been in service since 2003 and was an upgrade to the GV, which entered service in 1997.

“While the G600 doesn’t have the range of the G550 [7,767 miles at 528 mph], the G600 can still fly eight passenger more than 7,100 miles [at 561 mph], which is more than adequate for the vast majority of business flights,” says Private Aviation Advisory Board member Kevin O’Leary, the president and CEO of Jet Advisors. “The G600 is faster than the G550, and the highly efficient Pratt & Whitney engines afford great fuel economy, pushing a much larger cabin much more quickly through the air while using virtually the same amount of fuel.”

The G600 has a top speed of 610 mph, which equals that of the G650/650ER. Gulfstream says that because of the engines and the wing design, the G600 is 23 percent more fuel efficient than the other aircraft in its class.