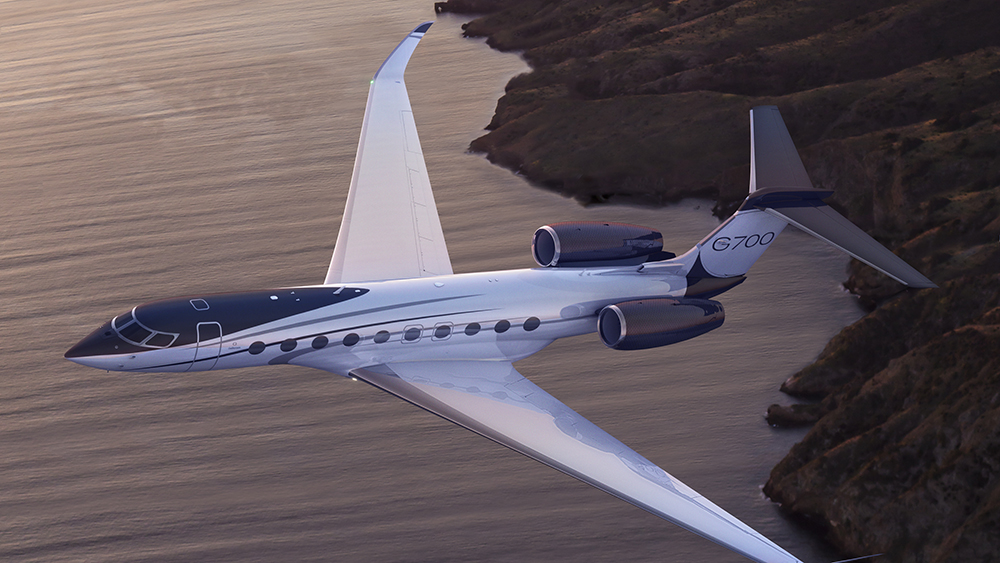 On paper, the extra 10 feet of interior space between Gulfstream’s new G700 and its next-largest model, the G650, may not seem that significant. But on the G700 mock-up at Gulfstream’s headquarters in Savannah, Ga., it was clear the designers had obsessed about every inch. “We already had seating for 13 in front,” says Tim O’Hara, Gulfstream’s director of design innovation. “For long missions, it made more sense to have a bedroom.”

A bedroom with its own en suite is the ultimate asset of any jet interior, and on the world’s largest, it’s a sanctuary. The bed’s smart-foam mattress declined, with a button push on the plane’s smartphone app, from recumbent seating into full-sleep position, while the lights dimmed in parallel and the oval windows went from transparent to dark. Instantly, the soft-lit room, with equally soft music, became more luxe hotel than all-business lounge.

Scale aside—the cabin’s 57-foot length and eight-foot width look palatial—the real differentiators between the G700 and every other business jet are the small, smart and often hidden details across the interior, as well as a commitment to using biofuel for its new-generation Rolls-Royce Pearl 700 engines.

I flew from St. Petersburg, Fla., to Savannah in a Gulfstream G550, an impressive aircraft in its own right, with an executive interior. But the G700 mock-up was something else: It was very big and very beautiful. The space, curves and infusion of natural light marked it as something new and special—almost, well, sensual.

There were subtle S-curves everywhere, in the seats, bulkheads, carpeting, along the ceiling and even in the artwork near the entry. The five “zones” were dressed in a planked walnut, with black ebony as the accent. The 21 x 28-inch oval windows provided exceptional views and natural light—or at least they would have in the real world. Even the LED lighting overhead had a curved architecture so that the bulbs remained hidden.

Up front, the designers dressed the galley in Casablanca marble. Its clean shade, black-tinted cabinets and leather-covered lounge gave the galley an understated, elegant look without compromising openness and functionality.

The real difference, however, was the more than 10-foot-long countertop and stainless-steel sink, which provide exceptional working space, along with a large fridge, generous storage, a conventional oven and a microwave. This could be the first business jet where owners can bring their chefs to cook meals from scratch, rather than having trips catered.

“The optimization of the galley came through user testing—about 30 flight attendants made meals during the multiyear design phase and gave feedback, and we made changes,” says O’Hara. “This is its fourth iteration.”

During the five-year design period, owners, pilots and in-house designers also provided input. O’Hara’s team came up with 10 test modules for seats and then used them at their desks. For hours. “There’s a big difference between sitting in a seat for 15 minutes and eight hours,” he says. “By the end, they were all fighting for the designs they liked best because of the comfort and enhanced ergonomics.”

Detail of the seats  Stephanie Lipscomb

I did my own testing in the second zone, experiencing not only the cozy white-leather recliners (which drop to sleeping mode) but also Gulfstream’s design evolution. O’Hara’s team created a special handle for adjusting positions; instead of jutting out, like most grab handles do, the designers embedded it into the contour of the armrest, so it’s not only more comfortable for the human wrist but also blends in with the seat.

The recessed LED light fittings also eliminated heat spots. “We spent a lot of time on the lighting,” says O’Hara, noting bulbs can be turned down to two watts, with either warmer or cooler tones, while other LEDs don’t dim below 20 watts. “You can’t find that level of sophistication in any smart home,” he says. “Plus, it allows for romantic dinners.”

At the six-seat zone that transforms into the dining area, the G700 has more secrets awaiting discovery. Hidden in the inlay of the walnut leaf that creates the dining table is an automatic charging pad to power a smartphone placed on the tabletop; creative touches and embedded technology are everywhere, concealed behind the conventional-looking exterior.

My favorite zone was the entertainment area, where, as the 43-inch screen rises from a credenza, the lights and windows automatically darken. There are no speakers; instead, the surround sound is projected via transducers behind wall panels. The experience of watching a movie is transporting, just as one might expect from a $75 million business jet. “This is actually a world first for anyone,” says O’Hara, adding that his team attends the Consumer Electronics Show (CES) each year to mine new technologies.

In the rear bedroom, the circadian lighting mimics daytime across time zones, but at a faster rate. That, and the low cabin altitude, should ensure a more refreshing sleep so you’re fully awake and powered up when the G700 drops you gently on another continent.

7,500: Range in nautical miles, about New York to Delhi nonstop