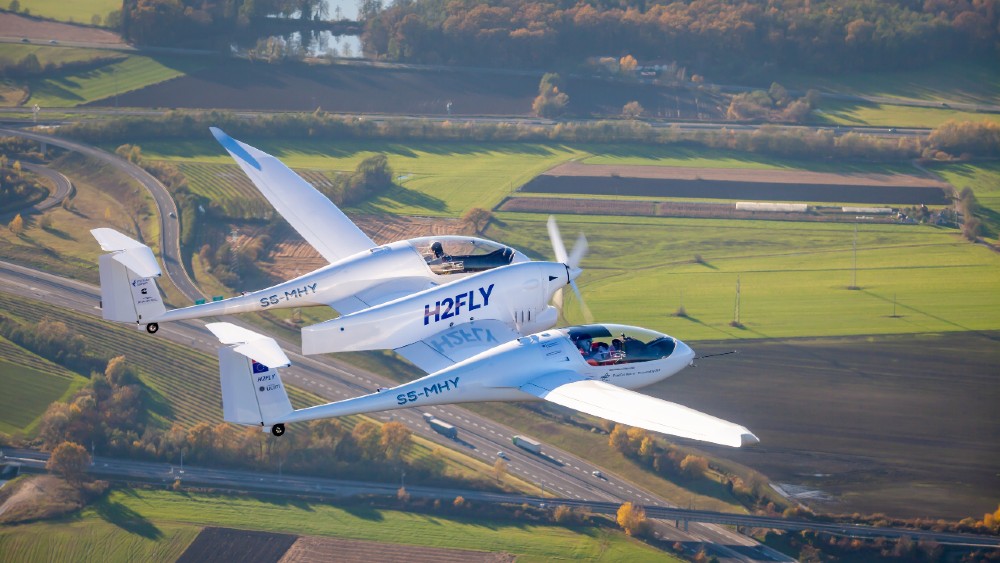 Everyone agrees that liquid hydrogen is the jet fuel of the future, at least for long-distance flight. With almost three times more energy than conventional jet fuel, a liquid hydrogen-powered aircraft can travel much longer with the same fuel—and without the greenhouse gases. Longer range and zero carbon emissions are worth the tradeoff of an extra storage tank’s weight.

But actually building an aircraft that can handle those tanks has proven to be a technical challenge. One German company is pushing ahead. H2Fly has been flying a four-seat aircraft called the HY4 on a fuel cell powered by hydrogen gas since 2016. In April, the aircraft set a record for the highest zero emission flight, at 7,230 feet.

H2Fly announced recently that it would be installing tanks that can handle liquid hydrogen. The switch from pressurized gas should at least double the odd-looking twin-prop’s range, from 450 to 900 miles.

The unusual design of the aircraft makes it more efficient to fly.  Courtesy H2Fly

“Liquid hydrogen has huge advantages over the alternative pressurized hydrogen gas, not least because it becomes possible to carry a far greater quantity on board an aircraft,” Dr. Josef Kallo, H2Fly’s co-founder and CEO, told Robb Report. “The result is significantly longer ranges.”

H2Fly’s current fuel-cell system was developed in 2012, though Kallo says the components have been updated over the last 10 years. “We’re currently producing 120kW, but we’re updating the stack and with the new technology we should get to a 300kW system.”

Kallo wouldn’t share performance projections, but it’s a safe bet the new system will improve on the current version of the HY4, which has a maximum speed of 125 mph with a 90-mph cruise. Those numbers are possible thanks to an efficient twin-fuselage design that provides optimal spacing of the propellers and electric motors, which are powered by the cells and a small battery bank that offers additional power during peak loads.

The HY4 filling up with hydrogen gas. The new aircraft will have an extra tank for storing the liquid hydrogen.  Courtesy H2Fly

“If we really want to change energy use on a global scale, we have to go with the fuel that provides the most efficient way of creating power, and that is definitely hydrogen,” Kallo said. “No other process comes close.”

The company has entered into a partnership with Deutsche Aircraft to develop a fuel-cell powered aircraft that will hold up to 40 passengers, with a range of 1,200 miles. Like the HY4, it will tap into liquid hydrogen.

H2Fly isn’t the only manufacturer working on an experimental liquid hydrogen aircraft.

In 2020, Airbus presented three ZEROe hydrogen-fueled concepts that it says will go into commercial service by 2035. Cranfield Aerospace Solutions announced that its Project Fresson was switching from batteries to hydrogen gas power. It will have a nine-passenger aircraft that is scheduled for a demo flight next month.

ZeroAvia said it’s developing an aircraft with a fuel-cell powertrain that will fly 20 passengers 350 nautical miles. Tests could begin next year, with entry into commercial service as early as 2027. Last March, FlyZero also detailed three concept aircraft that will fly on hydrogen.

Testing on the liquid-hydrogen-powered HY4 is expected to begin early next year.