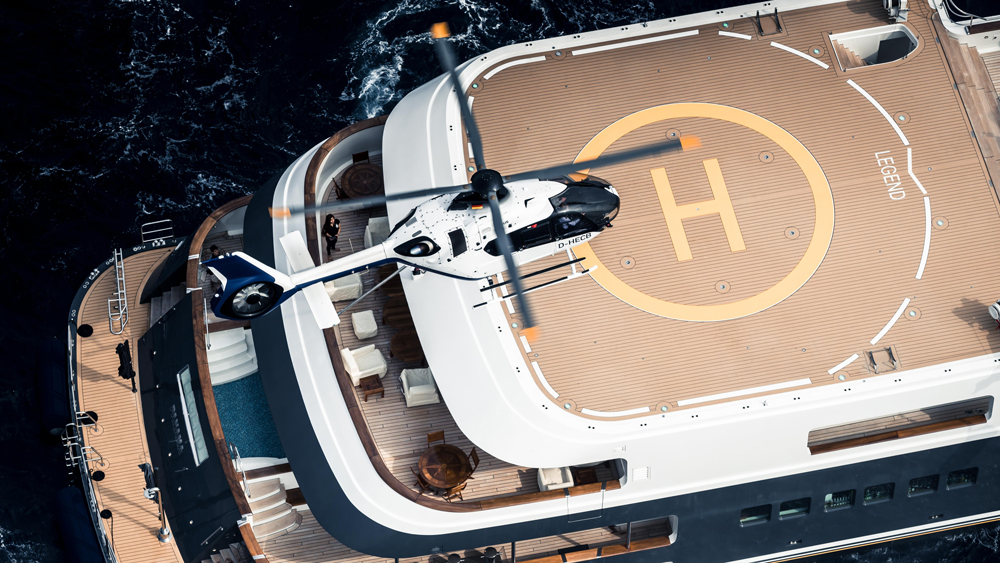 The Monaco Yacht Show isn’t just a showcase for boats; it’s also a showcase for all of the outrageous stuff you can put in, on, under, and around your boat. And while most people’s minds probably go to tenders and toys like scuba gear, PWCs, kayaks, and submarines, there really isn’t a yacht accessory that beats a helicopter in terms of status symbol. Why board a tender, wait for it to drive to land, dock, disembark, and then head the rest of the way to your destination when you can fly directly there?

At this year’s show (which ran from September 26 to 29), both Bell and Airbus were present to show off their best models to fit the yachting lifestyle. For its part, Bell was touting its 505 Jet Ranger X and 429 Global Ranger models, which can transport four and seven passengers, respectively. The company specifically notes that the 429’s large cabin provides plenty of latitude for VIP customization like different seat configurations and enhanced interiors.

Airbus—or rather ACH, the aerospace giant’s relatively new dedicated corporate and personal helicopter brand—brought a lot more pomp to the Monaco Yacht Show. The company delivered the first ACH135 Helionix to its new owner, charter operator HeliGroup, at the Monaco Yacht Club. Representatives from ACH and HeliGroup were joined by the Royal Air Force Red Arrows—the U.K.’s equivalent to the U.S.A.F’s Thunderbirds—who were there as guests of honor after performing an aerobatics display over the show.

The helicopter was outfitted in a five-seat configuration with interior decoration chosen from ACH’s sports car–inspired Line series. However, what really makes this ACH135 special is its Helionix avionics system, which was designed by Airbus Helicopters to reduce the complexity of the system and number of displays pilots have to keep track of. It also has a more advanced autopilot system to make flying simpler and more importantly safer.