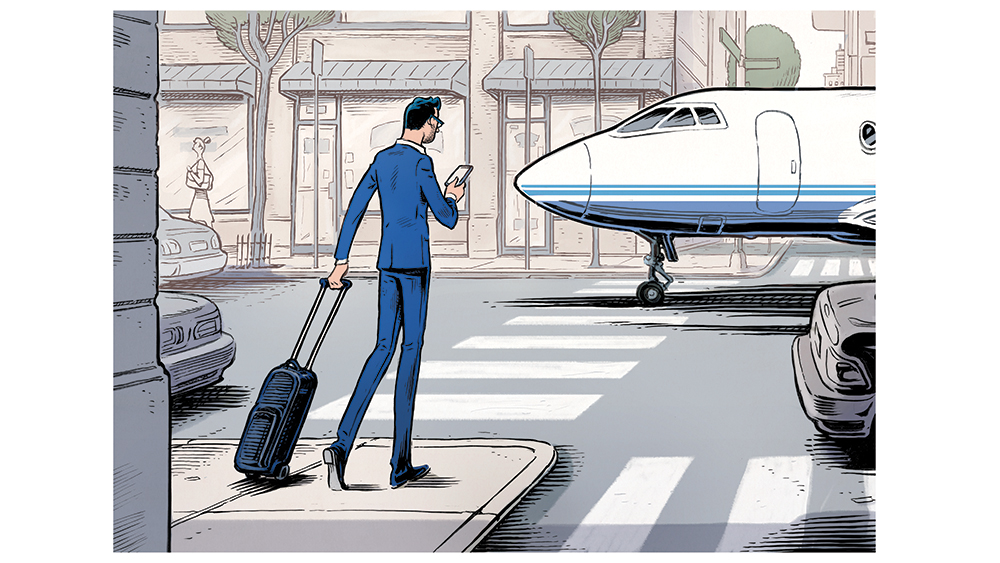 Sharing a ride on a private jet might seem counterintuitive during a pandemic, but of the handful of companies involved in single-seat charter sales, most report their business as having grown since the Covid-19 outbreak. Yet a schism remains between the young fliers targeted by these new business models and more established private-jet clients.

Wheels Up, which launched in 2013, originated the single-seat charter concept by offering shared flights on its original fleet of King Air 350i turboprops, before extending the program to larger business jets. Its Shared Flight program involves Core members looking to fill empty seats by posting upcoming flights on its app; depending on the number of travelers who hitch a ride, that could result in savings of 50 percent or more.

Wheels Up president Vinayak Hegde says shared membership activity has maintained its popularity. “It’s not like we just book a seat,” he says. “Two parties need to agree about the terms of the partnership, so they’re the ones who control the situation.”

Meanwhile, XO is reporting year-over-year gains of nearly 80 percent in its single-seat Shared Charter program. “We’ve had the program since the start of the company,” says XO chief marketing officer Lynn Fischer, “and it continues to expand.” XO sells empty seats on 50 weekly charters from New York to South Florida, and interest is gaining for the New York–to–Naples, Fla., and Los Angeles–to–Aspen routes.

Charterers can advertise an empty seat or individuals can join “crowd-funded” flights. Driving both programs: aspirational fliers between 18 and 44. “We’ve been communicating how accessible private aviation is,” Fischer says. “We want to fully occupy these flights rather than flying them half-empty.”

Dallas-based JSX organized its core business around selling individual seats, originally for as low as $199 between Los Angeles and Las Vegas. The company began scheduled flights between fixed-base operators in California, Las Vegas and Phoenix using converted Embraer ERJs with 30 seats, positioning it as a more luxurious alternative to commercial flights. It was an instant hit among aspirational types, says JSX director Ben Kaufman. “The customer base was heavily weighted towards people under 35,” says Kaufman. “We received a lot of publicity thanks to social media, with people taking selfies on the airplane.”

But as JSX has expanded—it now flies to locations in California, Nevada, Texas, Florida and New York—its dynamic pricing model raised rates significantly; that $199 LA-to-Vegas ticket is now often closer to $500, which has altered the customer base. “We’ve seen our clients from 35 to 55 [years old] grow to 60 percent during the pandemic,” says Kaufman.

The more traditional aviation clients, including aircraft owners and 25-hour jet-card members, have moved in the opposite direction according to Jamie Walker, president and CEO of Jet Linx. “We launched our OpenSeat Exchange in 2019, at the request of card members who wanted to fill a seat on their aircraft,” he says. Initially, the exchange performed as planned. “But as soon as the pandemic hit, activity slowed to a crawl,” Walker adds, noting that now “very few members are releasing those seats.” That’s due in part to the fact that Jet Linx’s members are a different demographic than the aspirational fliers attracted by single-seat programs. “If they’ve committed to 25 hours [of private-jet travel] per year, they can afford not to sell the seats,” he explains. But he expects activity to resume as Covid abates. Which begs the question: Just how “private” is private-jet travel if it includes a bunch of strangers?