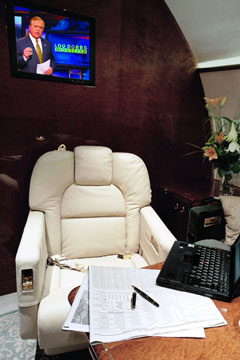 During Boeing’s annual investors’ conference last May, Connexion by Boeing President Scott Carson clicked on several plasma screens to begin his videoconference with Ed Laase, the company’s system development director. Carson was in St. Louis while Laase was in Arizona—or, to be precise, 37,000 feet over Arizona, aboard Connexion One. While the Boeing 737-400 flew over the Grand Canyon, Laase conducted a seamless videoconference with Carson, wowing observers with the company’s technology. “It was pretty profound,” Stan Deal, Connexion’s director of sales, says of the presentation. “In the near term, the business jet market will latch on to this feature, because it is the ultimate in communication to be able to see who you’re talking to. You get the full impact of what you’re trying to communicate.”

Sky-high videoconferences represent only one slice of the increasing capabilities of in-flight technology. Today’s business jet is a flying office, equipped with high-speed Internet access and wireless networks, providing executive travelers with the ultimate business tool—and one, equipped with entertainment features such as surround-sound, that allows for pleasure as well.

Not long ago, if you traveled cross-country you would need several hours—most likely on a hotel’s dial-up connection—to dig out from under the barrage of e-mails accumulated during a six-hour flight. However, many of today’s executive-transport aircraft, such as the Boeing Business Jet, Bombardier Global Express, and Airbus A340, can be equipped with Connexion by Boeing’s broadband system. With it, you can enjoy high-speed e-mail and Internet connections while flying over the United States, enabling you to access your networks and respond to messages at 35,000 feet.

An antenna placed on top of the aircraft gathers satellite signals at 20 megabits per second and beams data from the plane at 1 megabit per second, providing Connexion users with speeds similar to high-speed home or office connections. You can also access your company network from your plane’s computer. “Our world has moved to a connected world in which being informed and being part of your day-to-day business while on the road is mandatory,” Deal says. “You really need to be connected to the office environment.”

For smaller business jets, the Swift64 system is available. A product of London-based Inmarsat, Swift64 is the equivalent of a home dial-up connection that enables you to e-mail during a flight. Internet surfing with the Swift64 is a slow process, although it is possible to bundle multiple Swift64 receivers and increase speeds to 128 kilobits per second. “The Swift64 really does work,” says Mike Morse, vice president of sales and marketing at Baker Electronics, a Florida company that designs cabin management systems. “It’s the only truly global satellite communication system. It’s as good as a standard home modem.”

The advantage of Swift64 is that it is a global system, enabling you to access e-mail while flying overseas. Connexion is currently available only in the continental United States, with European rollout scheduled for early 2004. Coverage in Asia, Africa, and South America is scheduled for early 2005. But for those who fly domestically and enjoy web surfing, Connexion’s high-speed service is ideal. “The Internet is not just a work tool anymore,” Deal says. “It has become an entertainment tool as well.”

Baker Electronics’ Morse recently demonstrated an XM Satellite Radio system to a Global Express owner, and after listening to music and news for several minutes, the owner turned to Morse and declared, “That’s it.” He purchased an eight-receiver system for his jet, enabling him to access satellite radio by way of headphones, an entertainment system, and individual listening stations.

Baker can install XM Radio by simply placing an antenna on your jet. The service, which provides more than 100 channels of news, sports, music, and weather updates, is available in the continental United States and is the same service currently available in cars. While you are traveling to your next business meeting, you can track the stock market and obtain weather forecasts for your destination. You can also listen to the same program from coast to coast instead of having stations fade out as you travel long distances.

Live radio is only one option. Audio International, a division of DeCrane Aircraft, has many clients requesting multiple CD and DVD players and CD jukeboxes to store their music. Another growing trend is audio-on-demand, where users can store as many as 5,000 tracks on a server or MP3 player, eliminating the need for hauling CDs onto the plane. “You download songs from the server to your unit and put together your own audio-on-demand file,” explains Henry Starke, an engineer at Germany’s Lufthansa Technik.

Watching the Tube in a Tube

Rockwell Collins offers a similar product, Airshow 21, which bundles an Internet connection, CD and DVD players, and satellite TV into its cabin entertainment package. Like Connexion, Airshow 21 uses a DirecTV signal to provide owners with access to popular television channels. Airshow service is currently available in the continental United States, Europe, and the Middle East.

Companies are also exploring video-on-demand, which will enable owners to compile personalized collections of favorite shows, movies, and sporting events to watch on longer flights, although Baker’s Morse believes this service might not be as popular as its audio counterpart. “Video-on-demand is something people have looked at and we’ve had requests for, but it doesn’t make as much sense as audio-on-demand,” he says. “There are not many people anymore who watch the same movies repeatedly.”

Live television, satellite radio, and audio-on-demand bring a host of entertainment options to your plane, but they are only as good as the equipment that delivers them. Lufthansa Technik recently completed a Boeing 747 for a private customer that features its invisible speaker system, allowing the jet’s owner to enjoy concert hall–quality sound without sacrificing any aesthetics.

Lufthansa Technik teamed with ELAC, a German speaker company, to develop the system. The speaker panels are built directly into the walls, the ceiling, or the bulkheads, and can be covered by fabric or painted over. “You are not seeing any speaker grilles in the aircraft,” says Starke. “It’s also very difficult to really recognize where the sound is coming from, because the speaker panels are not as directional as conventional speakers.”

The most popular request from customers is for surround-sound systems, but Morse says that for most jets, such setups are impractical. “An aircraft is a tube,” he explains. “You’ve got your bulkhead monitor and it’s offset, because it can’t be in the center of the aircraft. Now you need a center channel, forward left and right, rear, and subwoofer. You can install all those things and set it up for a VIP seat, but everywhere else you sit in that plane, there’s only one portion of that speaker blaring at you.”

The greatest challenge for cabin management companies is to ensure that their equipment passes FAA requirements. Electronic emissions from computers and monitors must remain low to prevent interference with avionics, and high-tech equipment must be sturdy enough to withstand turbulent flights. Lufthansa Technik installs bulletproof glass on the faces of its 42-inch plasma screens.

Similarly, Audio International takes measures to control electronic emissions from its onboard LCD monitors. “We’re trying to make the cabin look like a living room, but there’s a lot of engineering that goes into the products to make them comply with FAA requirements,” says Dick Swingen, president of Audio International. “The environment we’re working in is not entirely forgiving.”

Many of today’s larger charter operators are offering planes that feature the latest in cabin entertainment and technology. While not all of their jets may be equipped with high-speed Internet or plasma screens, the following are several of the top charter companies that will guarantee you a smooth and productive flight: