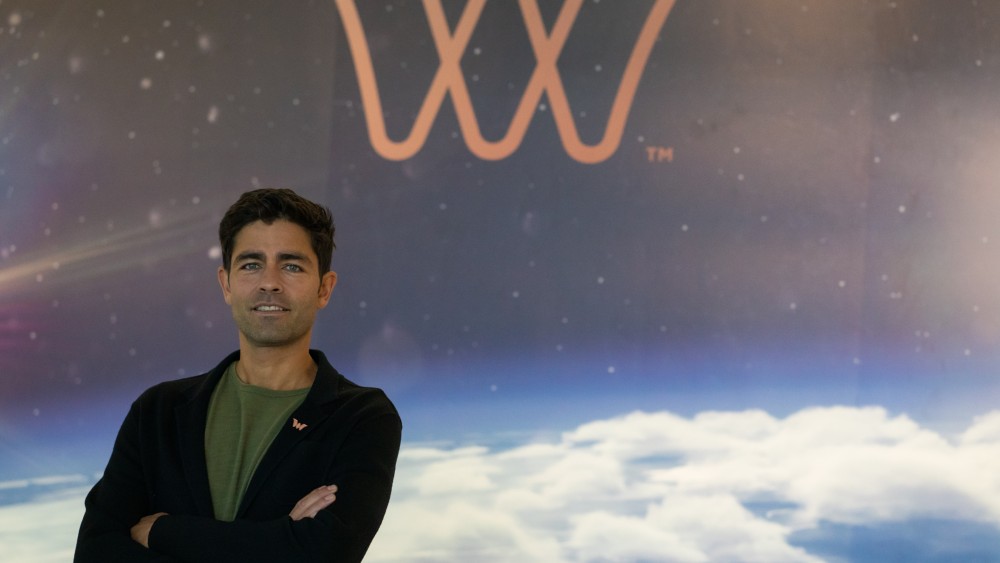 The latest space-tourism ventures have been using celebrities as endorsers. Last July, Virgin Galactic’s Sir Richard Branson was on the first flight of tourist “astronauts” to the edge of space, where Branson and some of his Virgin Galactic colleagues experienced about three minutes of weightlessness.

Actor Adrian Grenier, best known for the television series Entourage, will also be playing a lead role for startup World View. The company is developing a space balloon and capsule that will launch tourists into space.

Unlike Capt. Kirk, Grenier will have a titled role at World View as its Chief Earth Advocate. “If that isn’t the coolest title ever, I don’t know what is,” Grenier told Robb Report.

Grenier, who rose to fame playing glib skirt-chaser Vincent Chase, couldn’t be farther from that character in real life. A long-time UN goodwill ambassador on the environment, he’s also started the sustainability company Shft and is now leading a sustainable farming project in Texas. His interest in World View comes from an impulse to help “to push humanity forward,” he says.

“I’m excited about the mission to inspire shifts in perception, shifts in people, so that everyone can participate in a radically improved future,” he says over a Zoom call. “By allowing people to have those profound cognitive changes in their perception, we can activate together to build that future.”

As part of the gig, Grenier will forge relationships with other sustainability-focused organizations and greet travelers when they return to terra firma, where he will connect individuals and partner organizations in an attempt to turn their newfound appreciation for the planet into action. A documentary producer and director, he also hopes that those interactions provide fodder for a film. “I want to film everything,” he says. “We’ve been talking about how to capture those stories.”

Not coincidentally, Grenier’s introduction dovetailed with World View’s release of the layout for its redesigned space capsule: A pressurized, climate-controlled hexagon with large (6.5-feet by 4.5-feet) windows, food and beverage service, a telescope and live-streaming options. The capsule seats 10 and has room for walking around.

Reaching an altitude of roughly 100,000 feet, World View balloons won’t technically reach space (generally regarded as starting at closer to 250,000 to 300,000 feet), but they will have a much slower, six- to 12-hour journey compared to the 60-minute flights of the rocket-propelled competitors.

The capsule will give the same views of Earth and space as the space-tourism rockets.  Courtesy World View

“You can see everything the others see that go slightly higher,” World View CEO Ryan Hartman told Robb Report in a previous interview. “That includes the darkness of space, the stars and the curvature of the Earth. You’re truly seeing the planet from a vantage point that almost no one has.”

And although floating a balloon is far less atmospherically damaging than propelling a mass of metal into the stratosphere for a few minutes, World View trips are not without their environmental impact: Each 14-million-cubic-foot, helium-filled polyethylene balloon can only be used once.

“One of the reasons I’m here is to do a deep dive and help find ways to be carbon neutral and more environmentally sound,” he says. One of those ideas involves up-cycling material from the balloons to build greenhouses at his farm. “It’s only a waste if it’s not being used, so if we can put it back into its usefulness, put it back into the economy and create food and potentially trees… that’s one way to use this material.”

The space capsule at bottom will be reused, while World View is trying to figure out how to repurpose the one-time-use balloon.  Courtesy World View

Other aspects of Grenier’s role have not yet come into focus. “My role is largely undefined, and I’m looking for people to help me with that. I want to crowdsource that wisdom,” he says. Among other tasks he has a number of free rides to give away, and while he plans to bestow some on people of influence, he also hopes give a few to “people you might not otherwise think about, who are a little unexpected.”

Grenier will know what they’ve experienced, since he’s slated for one of the early trips. “One-hundred percent, can’t wait,” he says. “I’m on the list, which is the perfect segue to remind people that they can reserve their place in line, and if they use my name, they get 20 percent off the reservation fee.”

It costs $500 to reserve and the full trip costs $50,000—still, as always, Grenier’s doing what he can to help conserve the green.