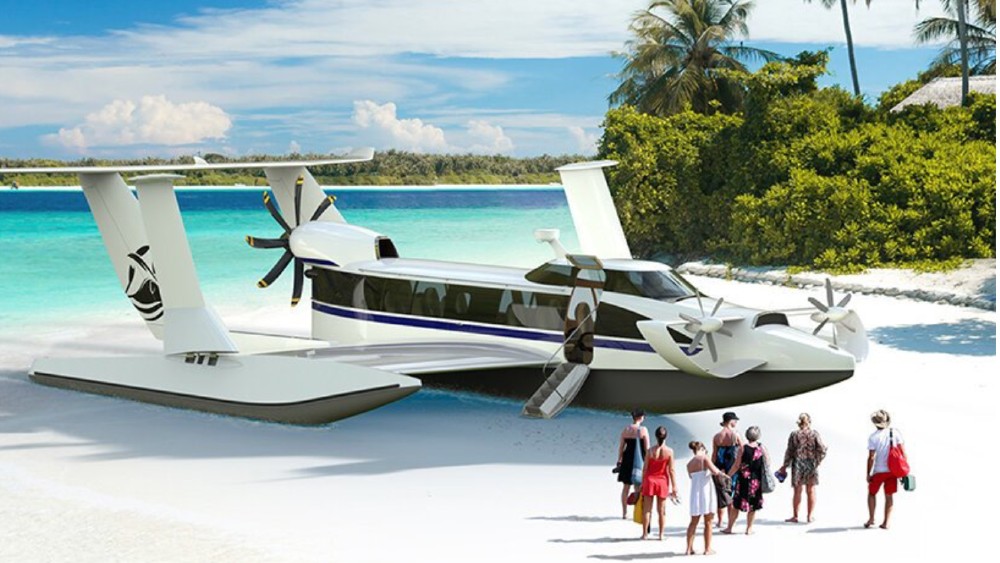 It’s a plane. It’s a boat. It’s a water-crossing, air-bound platypus of a creation that manipulates a law of physics that ocean-traversing birds have used forever to fly farther, faster and with less effort.

Officially, it’s called the EP-15, a 72-foot craft with space for two crew and 10 passengers built by RDC Aqualines.

Technically, it takes advantage of something known as ground effect, which occurs in fixed-wing vehicles when they fly at an elevation less than or roughly equal to half the length of their wingspan. At that altitude, excess air pressure develops between the wing and the surface, creating additional lift and reducing downdraft.

The EP-15 will fly about a foot over the water at up to 70 mph.  Courtesy RDC Aqualines

With its 55-foot wingspan, the EP-15 could, in theory, ride up to 25 feet off the surface of the water, but the published cruising altitude is actually just over a foot. The craft will first plane like a boat, and then hydrofoil on a central “hydroski” before gaining enough speed to lift clear at roughly 70 mph.

Propulsion details are sparse so far, but RDC has said that a 600-hp electric-hydrogen hybrid powertrain will turn the three propellers—two small ones on either side of the nose and a larger, central one at the rear—and retractable winglets will enhance the aerodynamics. Performance projections give the EP-15 a top speed of approximately 125 mph, with a cruising speed of 115 mph and range of about 375 miles with a full load.

The interior is arranged like a typical airplane, with single rows of seats separated by a central aisle. It can also be emptied, allowing the EP-15 to function as a cargo vessel, or customized to fit individual needs. Retractable landing gear allows it to taxi up onto a hard surface at the water’s edge.

The solid wingspan traps a cushion of air beneath it so that the plane hovers above the water.  Courtesy RDC Aqualines