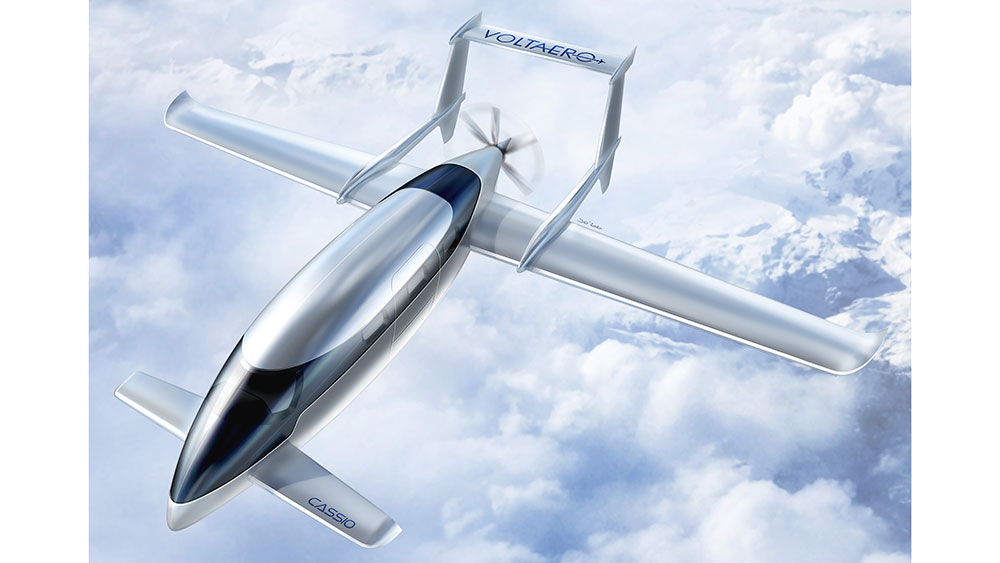 People buy a Tesla because it is electric, cool and has plenty of performance. What if you could buy an airplane that you could fly for 100 miles, land and go to a business meeting, then fly home a few hours later after it has recharged at the airport?

A French aviation startup called VoltAero, which has been moving quickly along those lines, yesterday released the final design of its nine-seat Cassio 2, a hybrid aircraft with a cruising speed of 230 mph—much faster than conventional single-prop planes—that will be able to fly in electric-only mode for 125 miles. The futuristic-looking Cassio 2 could be on the market within two years.

The Cassio 2 is a breakthrough in electric-aircraft design because it combines leading-edge aerodynamics and electric-hybrid propulsion to make it much quieter, more efficient, and greener than conventional aircraft its size. “Airframe design is not enough to reduce drastically emissions,” Jean Botti, founder and CEO of VoltAero, told Robb Report. “You need to find the best optimization between the powertrain for the propulsion and the frame. That’s why an Electric Hybrid Airplane is the most pragmatic solution for emission reductions.”

VoltAero’s hybrid series has evolved from a semi-traditional looking aircraft like the Cassio 1 (above) to the futuristic Cassio 2 (lead image) with improved aeronautics and maneuvering.  VoltAero

VoltAero has moved far beyond its original Cassio 1, which was loosely based on a Cessna 377, by redesigning the entire concept, adding new fuselage positions and reconfiguring wing and tail sections. Looking more like a sci-fi jet fighter with its “push” propeller in the rear, the Cassio 2 has three lift surfaces that greatly improve its aerodynamics and handling.

Botti, former Chief Technical Officer of Airbus, and his team at Airbus made aviation history when their Airbus E-Fan became the first all-electric aircraft to fly across the English Channel in 2015.

Five years later, Botti and his VoltAero team plans to do the same with the Cassio 2, but on a much broader scale. There are few teams with as much experience in electric-hybrid aircraft, and Botti himself spent ten years developing fuel cells at General Motors. He sees the nine-seat Cassio 2 with a broad appeal for business aviation, crossing different market segments, while also being a huge step forward in environmental stewardship.

The Cassio 1 was used as the test platform to prove the reliability of its hybrid engine.  VoltAero

“Adding sustainability to aviation will be key to its future,” Botti told Robb Report. “Aviation needs to be greener and quieter—and cheaper to operate. That’s what we’re doing with our Cassio models. Fortunately, we’re well ahead of competitors. Now that we’ve proven our hybrid electric powertrain is reliable, we’ll see how it appeals to different categories—from private owners to regional airlines, as well as charter, fleet companies, cargo, delivery services and even Medevac.”

This biofuel-powered engine from the Formula E racing company Solution F will be used along with two electric engines to power Cassio 2.  VoltAero

“The design represents the latest step in a very realistic and highly pragmatic creation of an all-new aircraft family,” says Botti. “It benefits from our team’s unmatched experience in hybrid-electric aviation, as well as the ongoing full-scale flight testing that removes the risk as we move toward the production phase.”

Initial deliveries are targeted for the end of 2022, beginning with the four-seat Cassio 330 version. The company has a production facility in southwest France.