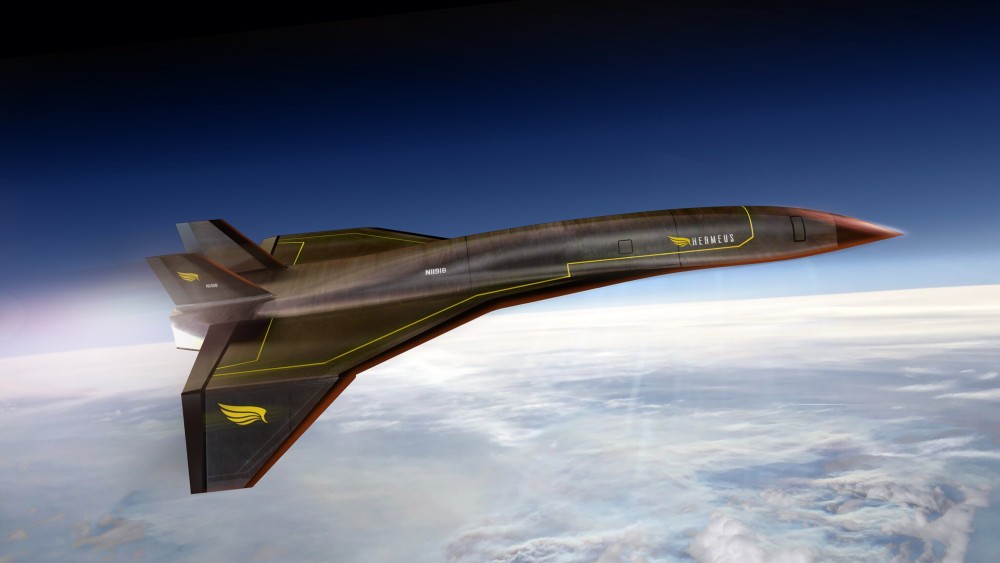 Supersonic flight is arriving—in a hurry. In the last 18 months, Boom has successfully tested its XB-1 demonstrator aircraft and pre-sold 15 of its still-in-development 30-seat Overture models to United Airlines. Virgin Galactic and Rolls Royce rolled out a partnership to develop a 19-seater. Even the Russian Federation revealed plans to build a supersonic jet for commercial use.

Then there’s the Hermeus Quarterhorse. Think supersonic or Mach 1—the speed of sound—multiply by five and you have the hypersonic Quarterhorse.

Last week, the Atlanta-based company announced a $60 million award from the US Air Force to finance testing of the aircraft. Like the Greek god Hermes, this Hermeus is designed to travel seamlessly between worlds, with a projected top speed of Mach 5.5—or 4,219 mph. That makes it the fastest reusable aircraft on the planet, so a New York-to-London flight will take less than an hour.

Belly of the beast: The Quarterhorse’s engine is based on the GE J85 turbo jet, but has been modified to reach hypersonic speeds.  Courtesy Hermeus

The speed will come from a unique engine set-up, a turbine-based combined cycle (TBCC) propulsion system. Such systems use a standard jet engine for launch and landing and to build enough speed in flight to feed air into a second turbine—known as a ramjet or scramjet—which produces more power, but requires high-speed air flow in order to ignite. The difficulty is managing the transition between the turbines and achieving the necessary aerodynamics.

Hermeus is off to a good start. In nine months, it designed, built and tested its engine, which is based on GE J85 turbo jet, and it has two advantages when it comes to testing. The Quarterhorse will fly autonomously, so the development team can get prototypes in the air and learn from them without risking pilots’ lives.

This is the Hermeus cargo version, scheduled to be tested in 2025.  Courtesy Hermeus

The other advantage is, of course, the government money. “While this partnership with the US Air Force underscores US Department of Defense interest in hypersonic aircraft, when paired with Hermeus’s partnership with NASA announced in February 2021, it is clear that there are both commercial and defense applications for what we’re building,” said AJ Piplica, Hermeus CEO.

Yes, defense is important, but really, let us know when we can wake up in the morning and make it to a late-afternoon tee time at St. Andrews.