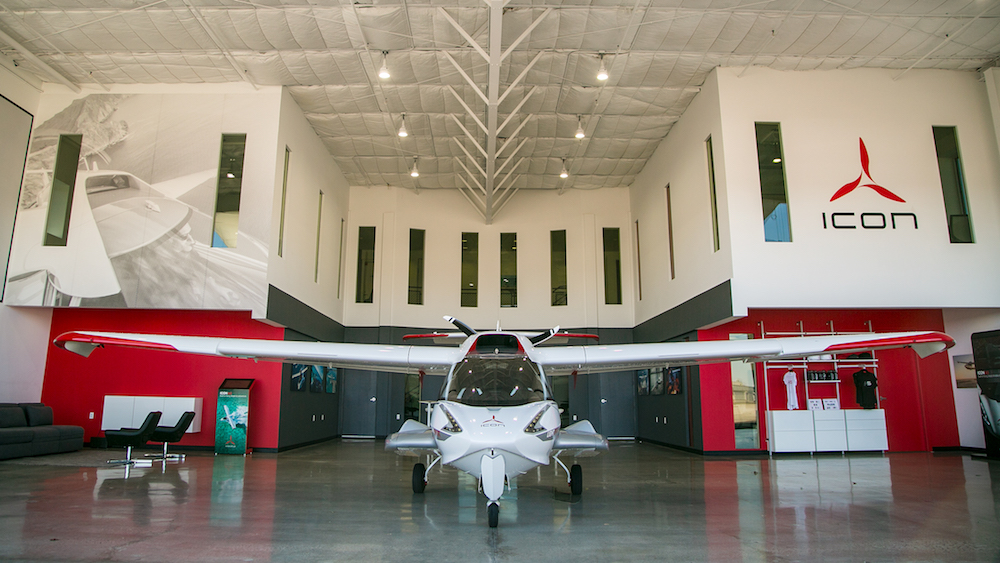 On a quest to democratize flying for fun—as opposed to a way to get from point a to point b—13-year-old Icon Aircraft last week welcomed the media and the public to its new demo and showroom hangar at the Santa Monica Airport, which is located in the middle of the company’s ideal demographic—active, adventurous, outdoor-lovers who live near the beach and are looking for fun.

To that end, you can store your amphibious A5 in your garage, tow it to your takeoff point (no runway needed), and you’re good to go. Similar to a Jet Ski or other water toy, Icon sees the A5 as a recreational vehicle to be used as such. “It’s not about what trip I do with my personal watercraft,” explained Wieners. It’s all about gathering together, being out with friends, enjoying the weather, enjoying the water—you’re flying with the windows open.”

Founded by Kirk Hawkins and Steen Strand in 2006 after the Federal Aviation Association’s 2004 decision to create the Light Sport Aircraft category, Icon Aircraft has one craft to date, the two-seat amphibious A5. With a maximum speed of 113 miles per hour, a range of 427 nautical miles and the ability to take off on a runway (or beach) or on water, the carbon-fiber jet features folding wings, retractible landing gear and simple automotive-like controls.

Chalk that up to the company enlisting BMW Design Works to create the interior and Nissan designer Randy Rodriguez to sculpt the exterior lines.

Tow the A5 via the optional trailer.  Photo: Courtesy of Icon Aircraft

Plagued by a couple of high-profile fatalities, Icon emphasized the safety features of the A5 (the spin-resistant airframe, angle of attack indicator, parachute system, planing wingtips, low stall speed) and the attempt to greater train and inform pilots of the dangers and safety protocols.

“What we’re trying to do is be very proactive in communicating safe flying guidelines, making sure that we understand what it takes to maneuver safely through the air, and this is where we’ve tried to put a lot more attention to,” said Wieners. Of course, no one will ever be able to completely eliminate human error, but the company has tried to provide pilots with tools needed to right a wrong move.

The A5 can land on and take off from the water.  Photo: Courtesy of Icon Aircraft

Icon has delivered 85 editions of the A5 to date and currently has 15 on the final assembly line at its production facility in Vacaville, Calif. The carbon components that will make up fuselage numbers 101 to 113 are now being built at its carbon-fiber plant in Tijuana, Mexico. If you’re ready to jump on the four- to six-month wait list, a fully loaded model (the company is currently only offering fully loaded models) will run you $389,000.

Describing itself as an “aviation company,” and not an “A5 company,” we will watch for more aircraft to come our way.