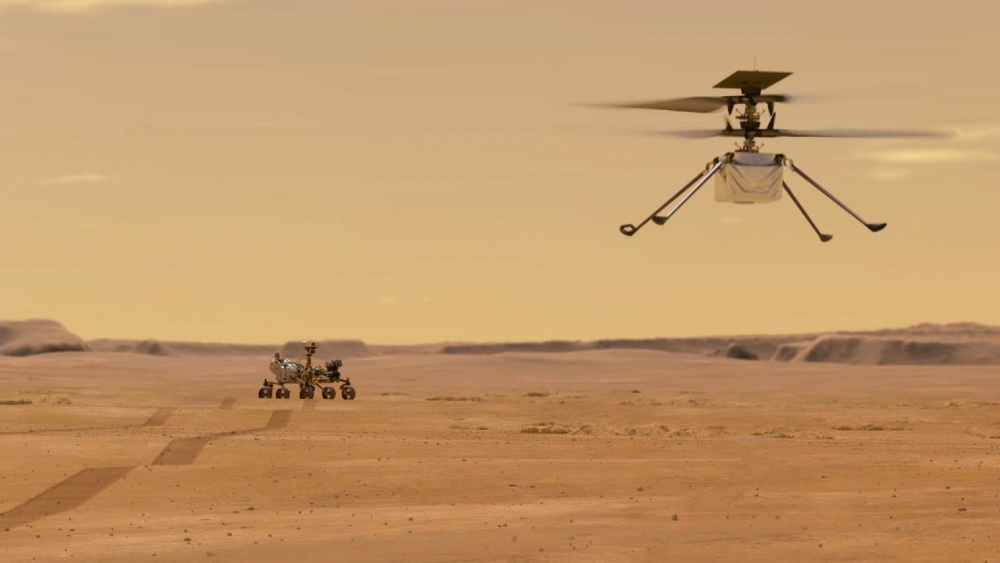 Monday’s videos of the successful Mars landing of Perseverance in the Jezero Crater was just the opening act for what NASA’s fastest and best-equipped rover will do for scientific research on the Red Planet.

Act two will be a new type of helicopter—also known as an eVTOL (Electric Vertical Take-Off and Landing) aircraft. Weighing just four pounds, Ingenuity hitched a nearly 300-million-mile ride to Mars, attached to the underbelly of Perseverance. Nicknamed “Ginny,” the VTOL is powered by six lithium-ion batteries that account for just 15 percent of its weight and are rechargeable from the solar array on top of the airframe.

Ingenuity—nicknamed “Ginny”—traveled 300 million miles attached to the underbelly of Perseverance. Now it will conduct its own test flights over the Red Planet’s surface.  Courtesy NASA

Ingenuity is only 19.2 inches tall, with four carbon-fiber blades arranged into two, 4-foot-long counter-rotating rotors that spin at roughly 2,400 RPM—or about five times faster than a typical helicopter—due to Mars’s ultrathin atmosphere. With about five inches of clearance off the ground, Ingenuity will carry two cameras: one color with a horizon-facing view for terrain images and one black-and-white for navigation.

Although Ingenuity can communicate with NASA through Perseverance, the flight tests will not be remotely controlled by Cape Canaveral. It takes almost 12 minutes for a signal from Earth to reach Mars and the same for a response. With such a delay, the eVTOL was preprogrammed with test scripts to be performed when it receives activation signals.

To mitigate all the imaginable risks associated with a first flight in an unpredictable and uncontrollable environment, the Jet Propulsion Laboratory (JPL) carried out an extensive simulation campaign at its CalTech research center in Pasadena, California. From wind-tunnel tests to conditions recreating Mars’s extreme temperatures and much lower gravity, Ingenuity sustained all known conditions it will likely encounter on the Red Planet.

The space eVTOL was designed to fly in Mars’s ultra-thin atmosphere, with gravity that is 62 percent lower than Earth’s.  Courtesy NASA

While ideal conditions for another Mars mission are 26 months away, Ingenuity’s validation of its flight characteristics and capabilities on the Red Planet will give NASA and JPL plenty of time to design, build, and test the next eVTOL to fly on Mars. Subsequent missions will be for freight and eventually the electric aircraft will be used for human transport.