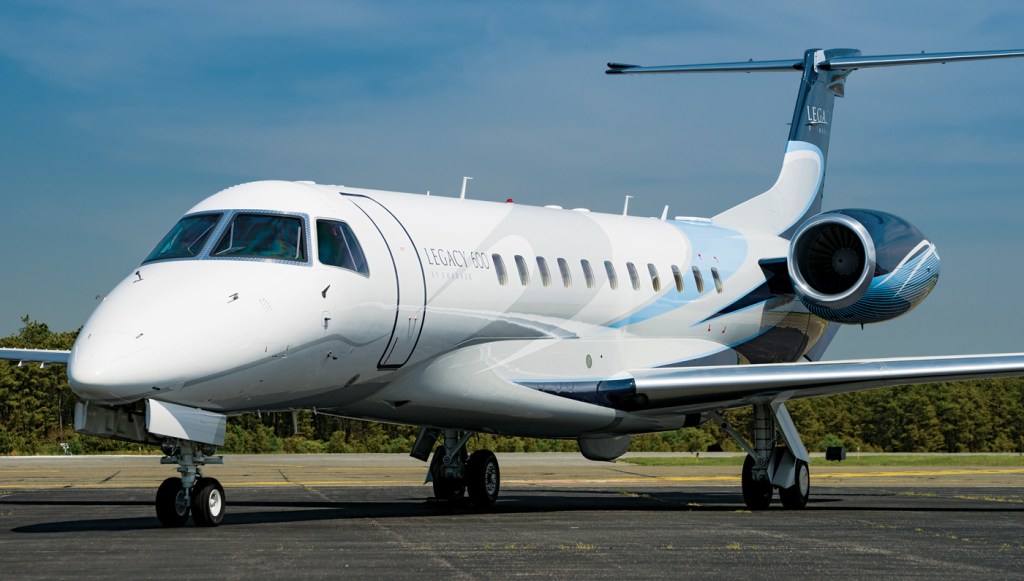 Purchasing a business jet is a special occasion, and Embraer treats it as such.

The complete experience of buying a new aircraft from Embraer Executive Jets, the business-jet division of Embraer, includes a visit to the global Customer Center in Melbourne, Fla. You can bring along your family—and your pilot—for a test flight with a sales representative, who will point out the small touches that make the interior special. The rep will show you the fabric-lined compartments near each seat in which you can stow your tablet or phone. He or she will note that the interior’s side panels are easy to remove so that repairs to any of the cabin’s systems can be done quickly and time on the ground can be minimized. You’ll be invited to swivel in the seats and recline them, to feel how smoothly they operate. Then you’ll peek into the cockpit to view the avionics.

After the flight, you’ll tour the manufacturing facility and maybe watch workers install a jet’s wiring or unpack fuselage parts delivered from Brazil, where Embraer is based.

You may even get to see the entire production line roll forward as each aircraft moves to the next step in its assembly process.

When you finish the tour, you’ll have a three-course meal in the customer dining room, choosing items from a menu with your name printed on it. Then, if this courting process has solidified your decision to buy the jet, a service representative will present you with a keepsake to mark the occasion: a used aircraft part, perhaps a bolt with the grease still on it. “We like to give people a greasy airplane part as a way of saying, ‘Welcome to the family,’ ” says Jay Beever, the vice president of interior design for Embraer Executive Jets.

Embraer entered the business-jet market in 2002 with a reconfigured version of its ERJ-135 regional airliner. The company had never sold aircraft to private owners, and that first business jet—called the Legacy at the time and now called the Legacy 600—revealed Embraer’s inexperience. “The design was poor, not elegant,” says Marco Tulio, the president and CEO of Embraer Executive Jets. “The first time [Embraer] designed a galley [for the Legacy], they wondered if the passengers would need ice.” No one on the design team understood the mind-set of someone who stays at the finest hotels and dines at Michelin-starred restaurants. But the company learned quickly. For the next iteration of the Legacy, Embraer partnered with BMW DesignworksUSA to create a cabin that mimicked features found in the interior of a luxury car.

It’s one thing to create fine stitching on leather seats, but giving the customer a memorable buying experience takes a different type of effort. Embraer opened the Florida facility in 2011, a couple years after it introduced the Phenom 300. That aircraft’s success has helped elevate the company’s position in the market (See “A Phenomenal Success,” page 260). Yet after it launched the Phenom 300, Embraer wanted to offer potential customers more than just a new aircraft. So it built a U.S.-based manufacturing facility that also serves as the center of the buying experience. In the past decade, Embraer has developed three other clean-sheet designs in addition to the Phenom 300, and each has been a brisk seller to fractional programs and individual owners. The company believes that the buying experience has played a part in those sales. “We are dedicating a lot of energy to being the best, not just in service, but in the experience,” says Tulio.

After going home with your greasy aircraft part, you’ll be invited back to Florida to select the design elements for your aircraft’s interior. The manufacturing facility has rooms full of fabric swatches from which you can choose. Or you can bring your own; Embraer will have it certified by the Federal Aviation Administration before installing it. Choosing the wood, fabric, and leather for your jet could take only a couple hours. If you’re less decisive, it could take weeks of consulting with the company’s designers, who will ask how you want the space to feel, and what elements are most important to you. At each step of the process, the designers can create a digital rendering of the proposed interior. You can even view a 360-degree video simulation of the cabin.

Once you choose an interior, it takes about 10 months for Embraer to complete it after the aircraft comes off the assembly line. But while your aircraft is being finished, your sales rep will meet you—at your favorite restaurant, if you choose—and present you with another keepsake: a small box about the size of a humidor. It will be made of the wood that you’ve chosen for the interior trimming, and inside you’ll find folded samples of your cabin’s fabrics, leathers, and carpeting. “The idea is that you can put it on display at home and it becomes a conversation piece,” says Beever.

When it’s time to take delivery of the jet, the company offers a ceremony, to which you also can bring the whole family and the pilot. Inside the customer suite, the children can play video games or watch movies while you sign the contracts in an adjacent room with a wide window overlooking the hangar. At the appropriate moment, the sales representative will open the curtains, and you’ll see your jet for the first time, gleaming in a hangar painted stark white. The doors will be open, and a red carpet will lead to the stairs that fold down from the cabin door. The entire delivery process, complete with test flights, takes a couple of days. By the time you leave, you’ll have become very familiar with the Embraer facility and feel as though you know the people who work there. And that’s the idea.

Luciano Froes, Embraer Executive Jets’ senior vice president of marketing, tells a story about a guy who drove up to the facility in a Bugatti, arriving without an appointment. The receptionist asked if he wanted to take a tour or a test flight or see a cabin mock-up. Oh, no, the man said. “I already have a Phenom. I just wanted to come back and visit the place.” Embraer Executive Jets, embraer (executivejets.com)