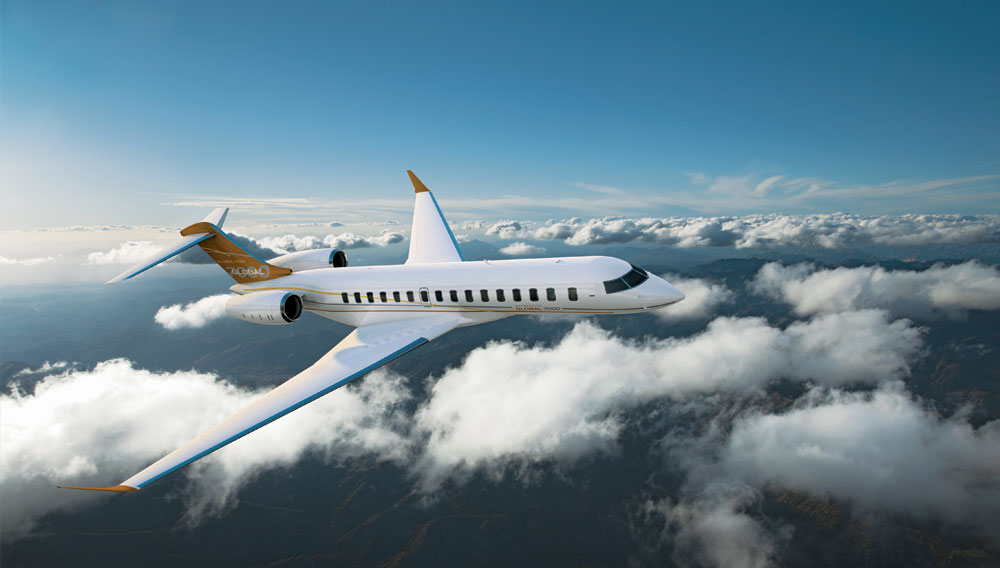 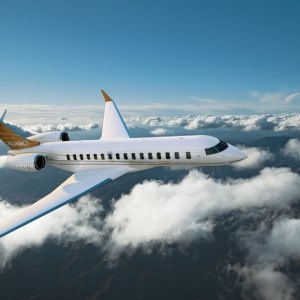 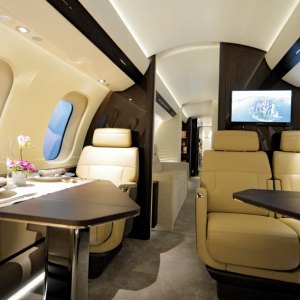 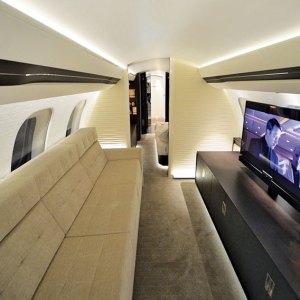 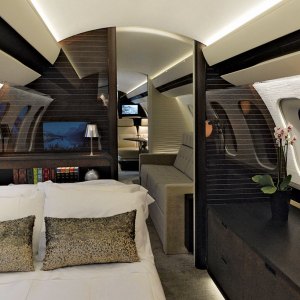 Under different circumstances, Bombardier could tout the Global 7000 by focusing primarily on the performance capabilities of this forthcoming large-cabin ultralong-range business jet. Its numbers certainly are impressive: a range of 8,401 miles while cruising at 561 mph and a high cruising speed of 594 mph. However, when the Canadian manufacturer announced the aircraft in 2010, it concurrently presented its plans for the Global 8000, a less expensive large-cabin ultralong-range business jet that will fly just as fast as the Global 7000 and nearly 700 miles farther nonstop. The Global 8000 is expected to enter service in 2017, a year after the Global 7000.

Also, Gulfstream, which already had the large-cabin ultralong-range G650 in service, began delivering the G650ER (ER stands for “extended range”) at the end of 2014. The aircraft costs about $6 million less than the $72.4 million Global 7000, and has slightly greater range and just as much speed. However, like the Global 8000, it is smaller than the Global 7000.

So while Bombardier has extolled the Global 7000’s speed and range, it has also gone to great lengths to direct attention to the cabin, because with it, the aircraft trumps the Global 8000 and maybe every other business jet. To promote the cabin’s myriad features and excite prospective buyers, Bombardier constructed the industry’s largest interior mock-up and took it on a tour of the annual aviation conventions and exhibitions. Mimicking the planned dimensions for the actual fuselage, the mock-up is more than 110 feet long. Its cabin is 54 feet 7 inches long, 6 feet 3 inches high, and 8 feet 2 inches wide (not including the baggage compartment). Aft of the galley, the passenger area is divided into four distinct zones.

The mock-up was built in the United States and its interior was finished in England before it was trucked on two flatbeds to Geneva, where it was reassembled for the European Business Aviation Convention & Exhibition last May. People stood in long lines to walk through it and see the galley, the forward seating area, the dining area, the cinema room, and the bedroom. Crowds also greeted the mock-up in July at the Farnborough International Airshow in England and in October at the National Business Aviation Association convention in Orlando, Fla. It was trucked to Florida from Teterboro Airport in New Jersey after being shipped across the Atlantic. At Teterboro, Bombardier hosted visits to the cabin by potential customers and provided solo tours for media members.

A tour of the mock-up begins with the galley, where, according to Tim Fagan, Bombardier’s manager of industrial design, the company received design input from the people who use the area the most and know it the best. “We spent a year leading focus groups of flight attendants worldwide who work on Bombardier jets to see how they use the galley,” says Fagan. The attendants’ advice—which covered everything from the size of the oven to the amount of counter space—prompted Bombardier to make the Global 7000’s galley 20 percent larger than the Global 6000’s. Because passengers enter and exit the jet through the galley, it has been designed to resemble a home kitchen, with polished black lacquer cabinet faces, a white countertop, and a visible coffee pot. (Near the pot is a pullout counter on which attendants can place a cup while filling it with coffee.) Instead of carpeting, the galley has a wood floor, adding to the space’s home-kitchen feel. The wood flooring continues the length of the aircraft’s center aisle and into the forward and aft lavatories.

The cabin is filled with natural light because of the abundance of oversize windows, and every seat in the two forward passenger zones is positioned to provide a good view of the ground or the clouds below.

The first passenger zone is furnished with four individual seats in a club configuration. The seats recline and pivot so that the front edge tips up a bit, like a living-room recliner. “We did an in-depth study of what constitutes seated comfort,” says Fagan, noting that the sensation of sinking slightly into a chair enhances relaxation. “The idea is that you might spend 15 or 16 hours on board, and you have to be able to stretch out.”

The second seating zone, featuring a table that stretches the width of the cabin and comfortably seats six, is designed for meetings and more formal dining. The table is actually two tables on either side of the center aisle. One table seats four (two on each side), and the other seats two. A drop-in leaf connects the two tables across the aisle, and the two aisle seats from the four-seat table slide to the center of the cabin, creating plenty of elbow room for all six members of the dinner party.

Sean Johnson, Bombardier’s director of completions for the Global 7000/8000 program, says he was looking forward to seeing people’s reactions to the dining and meeting area and has not been disappointed. “The table is open and inviting, and people really want to be here, either for a family dinner or a working lunch,” says Johnson.

The third zone is set up as a cinema room, with a couch on one side of the cabin facing a large video screen on the other. Pocket doors with sound-control insulation can be pulled shut to isolate the room from the other zones. “You need that because the white noise isn’t as strong in this aircraft as it is in most others,” says Johnson, referring to the aircraft’s quieter engines and the fuselage’s superior soundproofing.

Fagan notes that, as with the rest of the cabin, customer input played a role in the design of the cinema room. He describes how when the designers invited some Gulfstream-aircraft owners to tour the early version of the mock-up one of them pulled out the bottom drawer on the media console, put his feet on it, and said it should be a footrest. So the designers converted the drawer into a footrest. The couch reclines, and it also folds down into a bed.

The cinema room is lit through ambient sources only—no overhead lighting. Red-, blue-, and green-colored bulbs enable passengers to create different moods for the room. “We wanted this to have the feel of a hotel lobby,” says Fagan. “Soft, washed ambient light.”

The bulkhead at the back of the cinema room is the point at which the passenger space of the Global 5000 and Global 6000 would end. This is pointed out to everyone who takes the tour to emphasize that the fourth zone, which is designed as a bedroom on the mock-up, is exclusive to the Global 7000. “This is the only aircraft large enough for a fourth zone,” says Johnson. Though the Global 8000 will be larger than the Global 5000 or Global 6000, it will have only three passenger zones.

When conceiving the mock-up’s bedroom, which includes a TV at the foot of the bed, Bombardier’s design team toured boutique hotel rooms so that they could replicate the subdued lighting and homey feel of those spaces. They mounted small lamps on the bed’s headboard, which also serves as a bookcase, and included one on the table across from the bed as well. The space is furnished with a double bed, but Bombardier can install a queen-size model instead. The bedroom has its own lavatory, with closets that can be replaced with a shower stall.

The tour ends at the baggage compartment, which has a capacity of 195 cubic feet. That number may not mean much until you stand in the space and see for yourself just how many suitcases and golf bags it can hold. This is the whole idea behind the mock-up, and the reason why Bombardier went to the trouble of constructing it and hauling it from one continent to another. Before the aircraft actually exists, potential owners can have a firsthand look inside the Global 7000, which is a far more compelling experience than flipping through a brochure. “Once people get in the mock-up,” says Fagan, “they can really imagine themselves in the aircraft.”