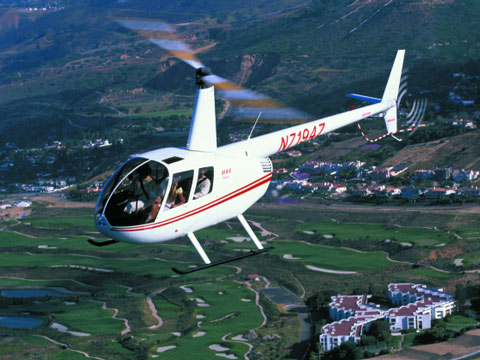 Several times a week, on clear, cloudless days, Martin Cutler peers down and chuckles at the phalanxes of cars and trucks choking the highways ringing greater Boston. If Cutler, an ophthalmologist, was in his car, the 30-mile drive between his home and office could take 90 minutes or more. In his Robinson R44 helicopter, however, Cutler’s commute comes to an end as fast as a smile comes to his face when he considers the alternative means of transportation. “It’s always a joy to look down and see the guys all stalled out while you’re going 120 mph,” says Cutler.

Among helicopter owners, guilt is not a dominant emotion, especially as it relates to traffic. In previous years, Brad Adams, CEO of Sunstone Systems International, a Temecula, Calif., manufacturing company, had avoided several business meetings in Los Angeles because of an unpredictable commute; the drive from Temecula to LA can take 90 minutes or three hours, depending on the fickle Southern California traffic patterns. In his Robinson R22, Adams zips to the city in 40 minutes. “That’s one of my favorite things about it—you’re flying over all the people caught in LA traffic,” Adams says.

The primary pleasure of owning a helicopter, however, is not derived from launching schadenfreude snickers at late-for-dinner motorists while you coast along at triple-digit speeds. The real joy of helicopter ownership comes from a sense of control—of schedules, commutes, business, lifestyle, and especially the machine itself. “Airplanes are boring,” says Clayton Walls, a Dallas entrepreneur and owner of a five-person Eurocopter EC-120. “You need a runway. How boring is that? It’s fun the first 10 minutes and the last 10 minutes. In between, you’re just sitting there.

You’re on a flight plan and you have to stay exactly where you are. In a helicopter you can go low and do anything. Helicopters are the way to go.”

Walls, who has flown from his home to the Caribbean, Alaska, and Canada in his Eurocopter—as well as to restaurants in Dallas—stumbled upon his latest passion by chance. Several years ago, when he was living in Kentucky and his start-up business was being courted by four potential buyers, Walls decided to vacation at Tall Timbers, a Colorado resort accessible only by narrow-gauge train or helicopter. After arriving at Tall Timbers via the coal-fired train, he received a call from one of his suitors, asking him to fly to the company’s Seattle headquarters to speak to its investment bankers. The company hired a helicopter to transport Walls from the resort to Durango, Colo., from where he could fly to Seattle.

The helicopter ride mesmerized Walls. The pilot, who was a flying instructor, offered to let him take the stick on the return leg to Tall Timbers. Walls met with the company executives in Seattle (“I made a killer presentation,” he recalls; “I could look at these investment guys and see dollar signs”). He then returned to Durango to fly the helicopter, which instantly had him addicted.

A week later, the Seattle company called Walls to make its pitch. Walls demanded his asking price, plus $3 million—the cost of a helicopter—which he wanted wired to his bank account that afternoon. The company agreed. “I hung up the phone and started laughing,” says Walls. “I drove to the airport 10 miles from my house in Kentucky and started taking helicopter lessons.”

Walls quickly discovered that a journey in a car, a boat, or even a recreational airplane can quickly slip into a passive exercise aided by cruise control or autopilot and bolstered only by intermittent cups of strong coffee. Conversely, a helicopter requires a deft juggling act between hands and feet and brain to prevent a 10,000-pound machine from falling from the sky.

A pilot—many owners fly their own helicopters—must master the cyclic (the stick shift) and the pedals, all while scanning the skies and communicating with air traffic controllers. Cutler, the ophthalmologist and Robinson owner, embraces the challenge, which many helicopter pilots view as a brain-training exercise to relieve the stress of life on the ground. “A helicopter is inherently unstable,” Cutler explains. “You have to have good eye-hand coordination. With a fixed-wing aircraft, once you set the flaps and ailerons [wing-mounted airfoils used for banking] and get it straightened out, you can sit there and the aircraft will stay in the air. In a helicopter, if you let go of the cyclic and take your feet off the pedals, it wants to fall to the ground. You have to watch it every moment you’re flying.”

Cutler was first exposed to helicopters through a patient of his. The patient had lost his driver’s license—for speeding violations, not because of bad eyesight—and had obtained his helicopter license. During an eye exam, the patient convinced Cutler to join him for a ride. Soon after, Cutler was taking lessons. He eventually purchased a float-equipped Robinson R22 Mariner, and during the summer he flew it to his brother’s house on New Hampshire’s Squam Lake, landing the helicopter on the water.

When the weather cooperates, Cutler, who has since sold the R22, commutes in his R44 to his office several times a week, and he often flies to his brother’s art gallery in Newport, R.I. He has made the 11-hour flight to Florida, and he recently flew a Robinson cross-country from California to Massachusetts for the company. An East Coast customer had purchased a Robinson, and Cutler volunteered his services as ferry pilot. Cutler flew to California and piloted the helicopter to Massachusetts, completing the left-to-right flight with a copilot in 24 hours, admiring the views of cattle in the flatlands and the foliage in the Northeast. “After two or three hours we would stop and have a drink—a soft drink—and continue on the way,” says Cutler. “The most interesting part was over a pass out of Torrance into the Los Angeles Basin. From 800 feet, we could see all these windmills. It’s a pretty abstract thing to see in the desert.”

Now that he owns the four-seat R44, Cutler often offers his extra seats to charities. Cutler raffles off rides to benefit local schools and clubs, giving wide-eyed children and their parents an up-close look at the R44’s leather interior and a bird’s-eye view of Massachusetts at 120 mph. In colder weather, Cutler simply turns on the helicopter’s heater, enabling him and his guests to enjoy the helicopter year-round—as long as snow and rain are not in the forecast.

Adams, a transplanted Connecticut native, does not share Cutler’s concerns about inclement weather, although fog sometimes rolls into his flight patterns. In a helicopter, however, he can fly below the fog; before, in his fixed-wing single-engine aircraft, such conditions grounded him. Clear and sparkling California days give Adams the chance to hum low along the coast, taking in the sights of the Malibu homes perched atop the craggy cliffs.

He hopes to fly even more in the coming year. With the town’s approval, Adams’ company will build a helipad on top of the Temecula office building. Adams is also exploring a business venture inspired directly by his helicopter-flying experience: Napa Valley wine-country helicopter tours. “There’s something about being able to go forward, go sideways, stop, and hover,” says Adams. “It gives you so much flexibility and freedom. It’s the closest thing to being able to fly.”

Today, 18 companies build helicopters, filling the market with a wide variety of fling-wing options to ease your commute to the office and your weekend home. Here are the latest offerings from four of the major helicopter manufacturers.

The Eurocopter EC155, which can haul 12 passengers and two pilots, is the big bird of choice for transporting guests. Wayne Huizenga, founder of Blockbuster Video, often flies a dozen of his friends to Florida sporting events in his EC155. You can also configure the aircraft to seat as few as four passengers, allowing for a roomier interior. Two Turbomeca Arriel 2C1 turbine engines deliver a cruising speed of 165 mph over a range of more than 500 miles.

The EC155 (approximately $8 million) also features Eurocopter’s trademark Fenestron enclosed tail rotor system, which the company touts as producing less vibration than an exposed rotor while also being safer and more streamlined. Huizenga recently purchased two smaller EC130s for a new business venture called Links Helicopters that whisks golfers from Shannon Airport in Ireland to far-flung courses for golf, then to castles for dinner and overnight stays, and back to the greens for more golf the next day. A single Turbomeca Arriel 2B1 turbine gives the EC130 a cruising speed of 161 mph.

The Bell 430, a retractable-gear twin turbine owned by Huizenga and golfer Greg Norman, holds the record for fastest around-the-world flight. The 430 (approximately $4 million) can carry one pilot and eight passengers, and the 9,300-pound machine has a 400-mile range and a top speed of 160 mph. The company also produces the smaller Bell 407 ($1,495,000 for the 2002 model). “The bottom line is that the helicopters are almost equal,” says Mike Cox, Bell Helicopter spokesman. “The biggest thing we’ve got going for us is that we have a reputation for reliability.”

The Torrance, Calif., company is building a loyal following with its R44 (approximately $300,000), currently the world’s best-selling helicopter. “The R44 is for the new rich, the dot-coms, those with a smaller staff,” says Roy Resavage, president of Helicopter Association International (HAI), an organization of helicopter owners and operators.

Maintenance and safety are also strong selling points for the four-seat, 6-cylinder piston. “We de-rate our engine,” says Jen McSkimming, Robinson heliport coordinator. “What that means is that it is not operating at max power all the time. Therefore it doesn’t fail. We have zero accidents in the U.S. due to engine failure.” That the R44 handles like a sports car is a bonus, says McSkimming, as is the fact that if you are building a helipad, you may not need to reinforce the roof. “The R44,” she says of the 2,400-pound machine, “is one of the lightest helicopters out there.”

Though Leonardo da Vinci invented what is commonly regarded as the first rotorcraft—the helical air screw—in the 1400s, Russian-born Igor Sikorsky is referred to as the father of the modern helicopter. His first two attempts at flight in 1909 and 1910 were failures, but his successes, including the formation of his namesake company, are what made the Sikorsky name famous.

The company’s flagship machine is the S-76 (between $6 million and $8 million), which can seat seven passengers. It is fast (approximately 175 mph), has a nearly 500-mile range, and sports an impressive safety record. The company is currently building the S-92, a 19-passenger helicopter that appeared recently in Mr. Deeds. Producers of the movie saw the prototype of the hulking white helicopter online and asked the company if they could feature it in the film. The S-92 (approximately $16 million) is scheduled for delivery in early 2004. -Liz Swaine