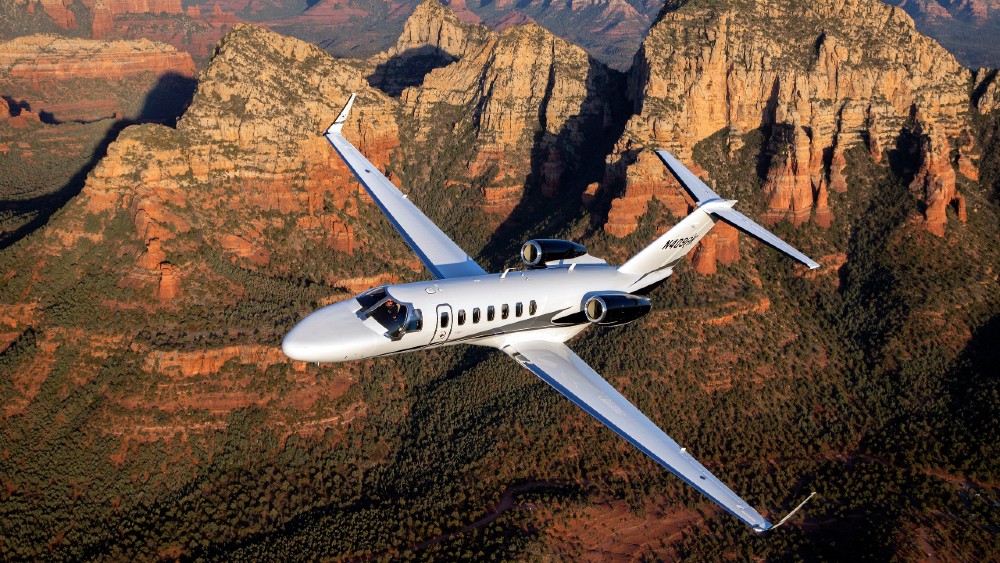 Piloting a jet is probably the most common dream of any kid whoever wanted to fly, especially considering test pilots were national heroes in the ’60s and ’70s. Think Chuck Yeager, John Glenn or Bob Hoover. The 40 chief executives in Jet Dreams most likely never thought they’d attain that lofty goal, at least not starting out in their careers. But climbing the corporate ladder gave them the clout and cash to fulfill the fantasy.

Jessica Ambats’ collection of images and quotes in her new coffee-table book were compiled after 15 years of shooting the CEOs who now pilot their own jets.  “What they all had in common was a childhood passion that was realized as executives,” says California-based Ambats about the highly unusual group she photographed. Owner-operators of prop-driven aircraft are common, but owners who fly their own jets is a small group.

“When I was 12, I read a book about flying to Alaska as a bush pilot,” says Raymond J. Bailey, president of Texas-based Lone Star Communications. “When someone asked me what I was going to do when I grew up, I said I’m going to be an Alaskan bush pilot. I hadn’t even been in an airplane yet, but I was adamant.”

Some of the executives fly decommissioned fighter jets like the L-39 and Marchetti S.211, while others are happier winging their way to business meetings and family retreats in more conventional business jets. The Embraer Phenom 300, Cessna Citation CJ3+, Pilatus PC-24 and Cirrus Vision Jet are all among the chief executives’ personal fleet.

Most pilots in the book were Ambats’ clients who commissioned images of themselves flying their jets. Think of Jet Dreams as the ultimate yearbook for owner/operators.

But getting the images involves nail-biting, close-quarters photography, sometimes with the prop-driven photo airplane flying only 20 to 100 feet in front of the jet.  That can be challenging, even dangerous, as the photographer discovered early in her career. “When I started, we had some very questionable moments,” says Ambats, an experienced pilot with an instrument rating. “That forced me to set parameters early on.”

Those parameters aren’t clear to anyone outside the photo shoot, but the team includes former Blue Angel and Thunderbird fighter-jet pilots used to flying in tight formations. When the camera is clicking, the specialists are flying the jets. Though for bragging rights, it looks like the CEOs are in control. “The owners are flying except for the formation,” she is quick to clarify.

The backdrops have also been wide-ranging, from New York City to the red rocks in Sedona, Arizona, to Monument Valley to Refuge Air Ranch, a fly-in community outside of Jackson Hole, Wyoming, where some CEOs keep their jets in home-side hangars. Several have flown their jets hours to reach dramatic shoot locations. “We’ve photographed a jet over New York City that had just arrived from Switzerland, and another owner flew from Mexico to California in his to be in the shoot,” she says.

The book itself is a pleasant read, with images of the aircraft and quotes from the owners presented in a coffee-table-book format intended to provide visual inspiration for budding pilots. Citing time and money, most CEOs fly their own jets because their businesses are often scattered around large geographic regions. Others fly loved ones or colleagues to visit family members, and for charitable purposes. Still others use their jets to bond.

“My father, who is getting quite old, said he’d love to visit every significant flight museum in the US,” says Adam Grosser in the book. Since then, the two Grossers have spent a week every summer flying to different regions to visit air museums. “We’re discovering planes we never knew existed,” he says. “It’s a treat to share dad’s passion for planes.”

Others fly for humanitarian reasons. Robert Wilson once transported two orphaned cougar cubs from Utah to a North Carolina wildlife habitat. A reporter, greeting the airplane, asked the pilot what he would’ve done if the cougars had escaped their cage. “I said I would’ve hoped they were full from eating the five folks in back before they got to me,” says Wilson.

The 216-page hardcover book, priced at $120, is published by Baseturn.com.