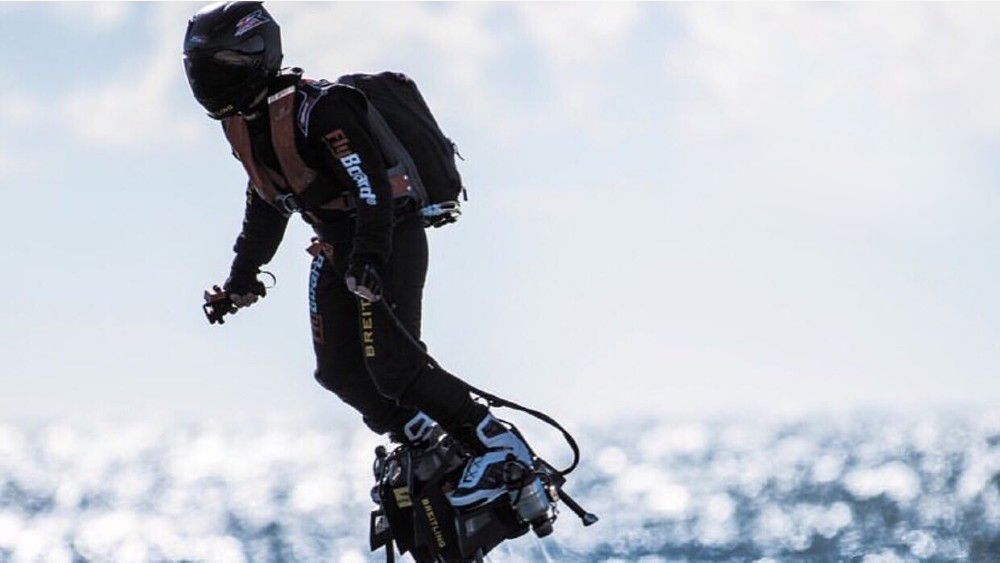 Franky Zapata made his name in the 1990s with his Jet-Ski team Zapata Racing. He then went from winning seven world titles in Europe to developing a series of flying toys connected to water jets that propel the rider high above the water. Then he set up a touring water show with athletes riding those toys with Hollywood-level production.

But what, Zapata thought, if you got rid of the hoses and used real jet engines? Like the kind used on jetpacks and flying motorcycles?

The Flyboard Air is the smallest jet-engine aircraft in the world, a hoverboard that makes Marty McFly’s nuclear-powered skateboard look like a toy. Plus, it’s flown by a single hand control.

Zapata achieved a Guinness World Record for farthest flight by a hoverboard of 1.4 miles, and in 2019, he successfully crossed the English Channel, carrying a backpack full of jet fuel to refuel midway and a parachute. Two French military helicopters escorted Zapata on the 20-minute flight.

The French inventor recently showed off his new one-person eVTOL called the Air Racer, which has a similar design as the Jetson One and RotorX Dragon.

But his passion remains the Flyboard Air, which Zapata continues to modify and show at different events, including Formula 1 races, the Le Mans 24 Hours and, most recently, the centennial anniversary of the Marseille-Provence airport, where Zapata was born.

The jet-powered hoverboard, or what the company calls the Independent Propulsion Unit, is powered by five jet turbines that deliver a top speed of nearly 110 mph (though it will be regulated to a more controllable 60 mph), a potential altitude of 10,000 feet, and about 10 minutes of flight time. Its rider has to weigh less than 250 lbs.

Adrenaline junkies, be warned. The Flyboard Air will never be available commercially, though the company says it has the same operational behavior as its water-jet ESH Flyboard Pro Series. So the experience is available, but on a water-hosed tether.

Nicknamed the Flying Man, Zapata has no intention of slowing down. Beyond the launch of his Air Racer, he just completed an art exhibition in New York. His “Flying Trunk” was among the 200 images on display that reimagined the luggage in honor of Louis Vuitton’s bicentennial.