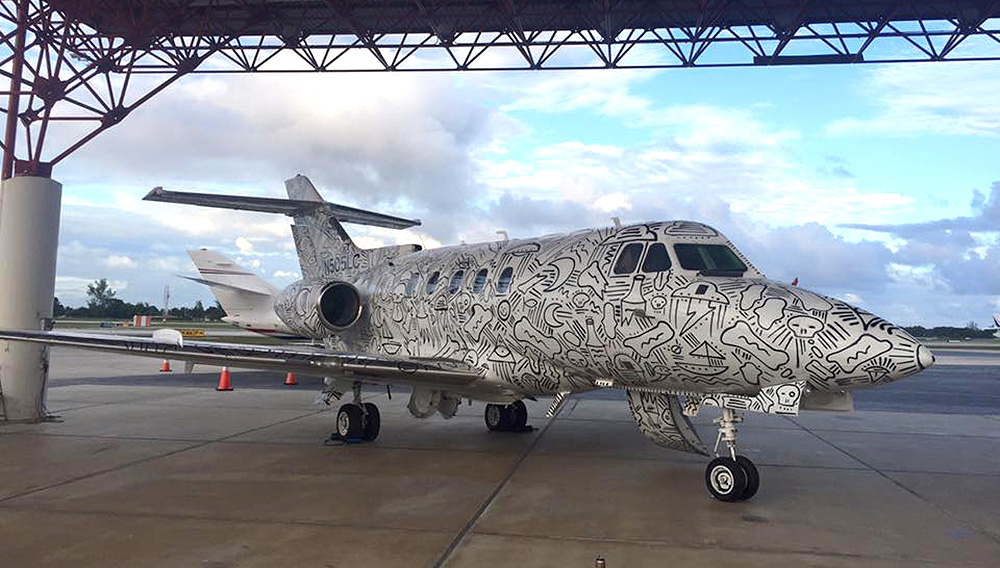 Contemporary Artist Louis Carreon collaborated with The Landmark Aviation in Miami during Art Basel for an altruistic, artistic initiative, which stood out in a sea of commerce-driven initiatives. Carreon was commissioned to paint a Hawker jet, with a portion of proceeds benefitting Autism Speaks.

The jet and a series of custom paintings, also by Carreon, were exhibited in an exclusive gallery in Miami International Airport’s Lux Terminal during Art Basel.

The jet is white with black art work painted throughout its exterior, reminiscent of the creative styles by Pop Art icon Keith Haring, whose art has inspired Carreon throughout the years.

“I dedicate this work to Keith Haring Foundation and the awareness of Aids,” says Carreon. “Keith wasn’t the first person to paint black and white, but he sure was the one to make it rock.”

Southern California Native Louis Carreon grew up during the ’90s, when hip-hop had a great influence in the streets of Los Angeles. Through trials and tribulations Louis made it out of the streets, conquered addiction, and surrendered to art during his time in prison. Comparable to most artists, Carreon managed to share his message and feelings through creating art. Louis expresses his art in ways that include installations, conceptualism, and outdoor works. His recent works consist of an exposition at Expo Chicago, a collaboration with 2015 Champion Chicago Blackhawks and Autism Speaks to paint Stanley Cup for Charity. Carreon’s success in 2015 is great evidence he is being recognized and welcomed into the contemporary art community.