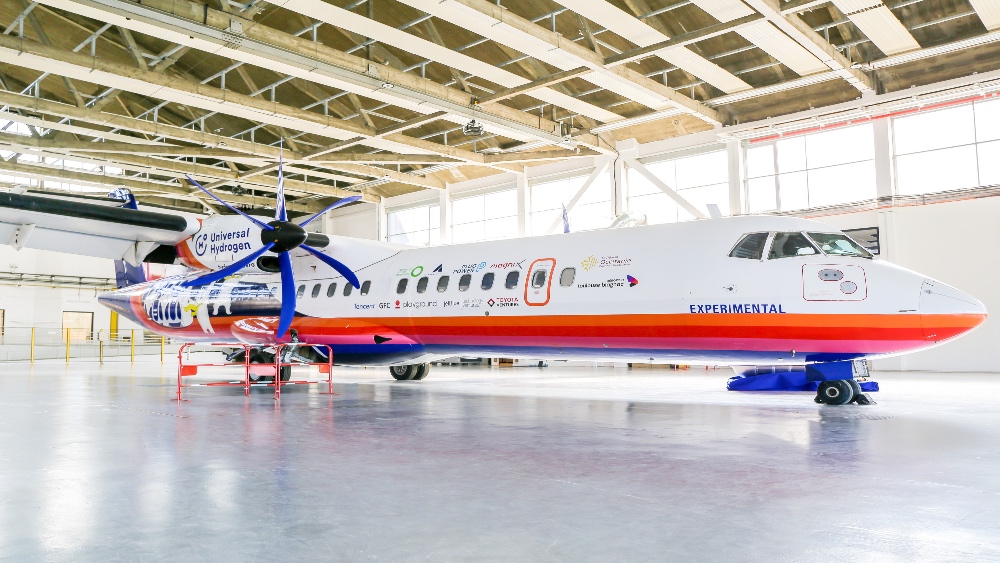 Last year, JetBlue became the first airline to invest in Universal Hydrogen, an aerospace company working to decarbonize the global aviation industry through the adoption of zero-carbon emitting hydrogen as fuel. This week, the company will debut its first hydrogen-fuel powered plane on its way to beginning test flights in the US.

The aircraft is the newly liveried ATR 72-600 aircraft that the company has been using to develop a hydrogen retrofit kit, which could potentially be used on all manner of aircraft in the future.

The model is already a popular choice for regional turboprop, so the new technology would help eliminate the need for lengthy—often pricey—infrastructure upgrades within major airports. The hydrogen-fuel powered retrofit gives the aircraft advantages over both conventional gas and electric energy. For instance, the flight range of even an electric turboprop would would be severely limited by the battery’s power density. The batteries are so heavy that the plane’s range would be far shorter than conventional planes. Hydrogen fuel cells, on the other hand, actually extend the craft’s range. Because it’s powered by lightweight hydrogen, the ATR 72-600 will have range that is equivalent to or even better than those of conventional jet fuel-powered aircraft. In theory, that would allow for airlines acquired the retrofit technology to fly further than conventional gas-powered regional aircraft. The forthcoming testing should help reveal the exact figures.

The test plane is a newly-liveried ATR 72-600 that has been outfitted with a hydrogen retrofit kit.  JetBlue Ventures

JetBlue has also been working with Joby Aviation (the company developing electric vertical take-off and landing aircraft, or eVTOLS) and Signature Flight Support to help bring aviation powered by electricity and hydrogen propulsion technologies to the market.

“This partnership allows JetBlue to not only continue to fulfill our domestic carbon neutrality commitment, but also evolve the type of offsets we purchase and help support the development of electric and hydrogen aviation—critical levers for meeting the US aviation industry’s net-zero goals,” Sara Bogdan, head of Sustainability and Environmental Social Governance at JetBlue, said in a press release.

Electric and hydrogen propulsion technologies could play a vital role in the sector’s future as it looks for ways to generate zero carbon-emission aviation. The promise of hydrogen fuel—and the performance it promises—could create a powerful economic incentive to further the industry’s move away from its dependency on fossil fuels. The real test will be whether these zero-carbon hydrogen fuel-powered aircraft can match or exceed the performance of their gas-guzzling counterparts. For now, that remains an open question.