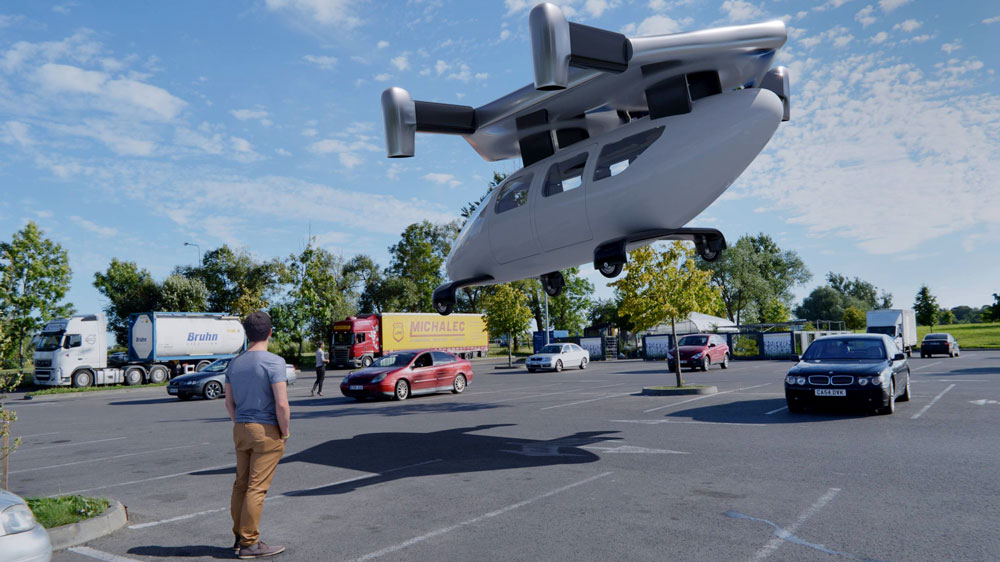 In the early 1940s, a former engineer named Alexander Weygers drew up plans for an aircraft that he called the Discopter. It was a one-person vertical takeoff and landing (VTOL) craft that looked like a flying saucer—a design and term that would not become popularized until 1947, following newspaper reports of a UFO sighting.

Weygers, who was born in the Dutch East Indies to Dutch parents and studied engineering and art in the Netherlands, moved to the West Coast of the United States in the early 1930s. He joined the U.S. Army in 1941 and presented his plans for the Discopter to different branches of the military. Each expressed some interest but took a pass because the U.S. military was too focused on—you know—trying to win World War II. Nevertheless, Weygers successfully filed his plans with the U.S. Patent Office.

Weygers’s Propeller Age invention seems to be an inspiration for the latest VTOL design to come on the scene: the JETcopter. It’s the brainchild of a Germany-based research and development firm of the same name. Indeed, an early version that the company displayed in April at Friedrichshafen AERO 2018 looked seemingly exactly like one of Weygers’s flying disks. Since then, the concept has evolved to more closely resemble the VTOLs we are used to seeing. The new iteration’s propulsion system, which is positioned on top of the fuselage, resembles the aircraft that Weygers depicted in his drawings—that is, it looks like a flying saucer, but with wings. The rest of the JETcopter looks like a helicopter, to which the company favorably compares its concept in terms of safety, speed, and operating costs.

The plans call for a propulsion system that consists of two enclosed centrifugal air turbines powered by a pair of 400 hp automotive engines. In the plans, each turbine is 6.6 feet in diameter and rotates in the opposite direction of the other to create the type of thrust produced by a helicopter rotor with a 36-foot diameter. The airflow from the turbines would be directed through two pairs of nozzles mounted to the ends of the two wings, which would tilt to enable vertical or horizontal flight.

The JETcopter would be made of carbon fiber and carry six to eight people. Projections call for a range of 620 mph and a top speed of 186 mph. The price would be about $350,000.

Because it’s a compact VTOL with no exposed rotor blades, the company says that the aircraft could theoretically land in a parking lot, making it ideal for travel within or between cities and could serve as an air taxi or corporate transport. In the plans, the propulsion system includes an automatic-leveling control, so the aircraft would be easy to pilot. Also, it could be equipped with one or two airframe parachutes, so even the most paranoid fliers can release their death grip on the armrest.

The JETcopter company says it plans to present a full-scale mock-up of its aircraft in April at the AERO general-aviation show in Friedrichshafen, Germany, where the company made its public debut last year. It also says it can build a fully operational prototype within 24 months. If the JETcopter is built, it will trump its inspiration. Weygers, who abandoned engineering for art in the 1930s, had been a successful sculptor and teacher of the art form in California before the war. After the war, instead of further developing his Discopter, he went back to teaching and creating art at his studio in Berkeley. And so flying saucers became only the stuff of science fiction. The designers of the JETcopter, however, see a much brighter future for their aircraft.