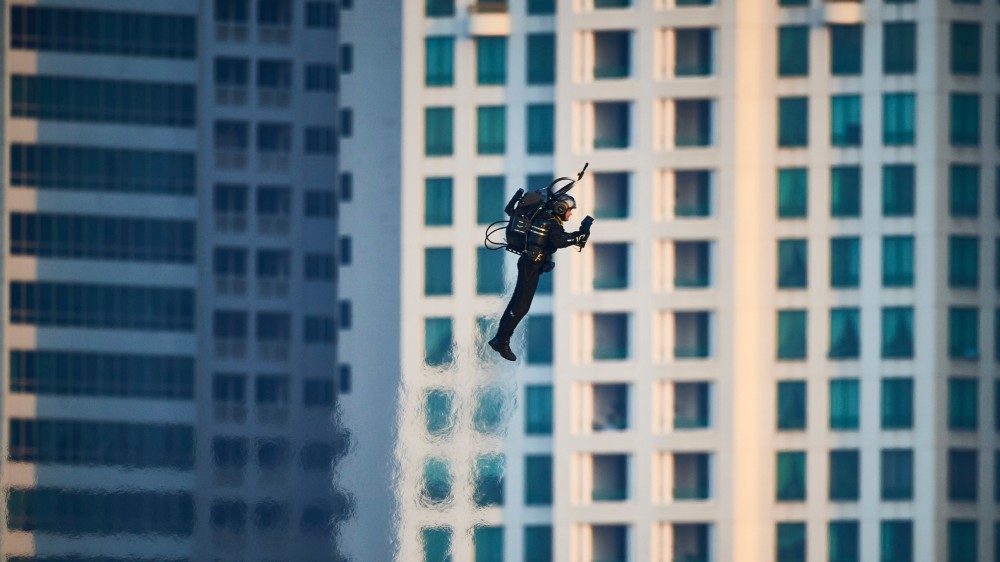 I pull the trigger and lock my arms straight against the hot thrust. But the jets strapped to my arms are pulling out. “Just lean on the system,” said Gravity Industries’ Richard Browning as I strap myself into his 50-lb. Jetsuit.

That works but there is a knack to it—I mutter a Newtonian physics pep talk to remind myself of the action-reaction link between movements of my arms and my consequent movements through the air.

A flyer in a Jetsuit hovering near a bridge in Prague.  Courtesy Edwin Van Keulen

But within a few minutes I can balance myself enough to feel the jets’ power slowly lifting me off the ground, hovering without all the mass and complication of the planes and helicopters I usually fly.

The concept of the Jetsuit is unchanged from when I last tried one three years ago. There’s one small jet engine on my back that supplies most of the thrust that will take me off the ground, and two engines on each forearm so that I can, simply by moving my arms, direct thrust exactly where it’s required to change my direction of movement.

But there have been improvements. The engines are more powerful and start faster. The next version will improve on that, promising start up to flight in just 15 seconds, as well as carrying more weight and being physically smaller than current versions.

Browning, creator of the Iron Man-like Jetsuit, says: “This developed out of a genuine joy of discovery—wouldn’t it be great fun if you could fly like this? No business idea at all. Aspiring ingenuity meets amazing engineering and add a pinch of superhero.”

His strap-on flying suit has a small jet engine worn on the back, plus two smaller jet engines worn on each forearm to direct thrust where pilot feels it’s needed to hover or move in any direction through the air.

Browning makes a strong case for the use of his suits by the military. They’re noisy but so compact and maneuverable they have the potential to redraw the rules on deploying manpower, he says. And the same goes for medical aid in harsh environments. The company has trained both soldiers and medical personnel to use its jetpack. It’s also using a base at the Goodwood airfield and race circuit, in the south of England, to offer Jetsuit experiences to anyone.

Interestingly, the Jetsuit flies between gaps in regulation, Browning says, as they’re usually flown close to the ground and at low speed. In a recent trial to test the suit’s ability to get a paramedic to an injured rock climber, Browning flew at just less than 30 mph but still reduced a 90-minute slog through difficult terrain to a five-minute flight.

The Jetpack at a Red Bull event.  Courtesy Jetpack Aviation

US-based Jetpack Aviation is the other main contender in this rather niche field.  While Browning has stuck to his “superhero-lite” philosophy, CEO David Mayman’s thrust-vectoring Jetpack has grown in weight so that the pilot’s leg strength is one of the main constraints on developing the manually flown Jetpack.

Mayman’s attention is also focused on something different but just as cool—a tiny aircraft called The Speeder that you sit on, and is capable of 500 mph. Mayman has given it the nickname, the “pocket-F35.”

It came, Mayman says, “out of a research contract with the US Navy Seals [for] something you can just jump on and fly.” So the eight-engined “flying motorbike” is being developed as an optionally piloted craft, with high levels of inbuilt autonomy—and as such it’s closer to a fighter jet than a jetpack.

The new Speeder concept is a ride-on jetpack that has a potential top speed of 500 mph.  Courtesy Jetpack Aviation

The Speeder has a range of one hour, helped by small wings, and in autonomous mode with a streamlined cargo it can do Mach 0.8. With a pilot seated in a motorcycle-type position the extra drag will limit it to 250 mph.

One intriguing thing is that the current craft doesn’t specify a way to strap any  pilot or passengers on. Mayman says the design means they couldn’t fall off  and he’s instead looking at independent parachute systems for riders and aircraft in case anything goes wrong. There’s room to look at that again, though.

Browning and Mayman are polite about the different strengths and weaknesses of each others’ designs. But both are selling in small numbers—Mayman’s Jetpack goes for about $400,000. And looking ahead, he can see civil versions of the Speeder selling for less than half a million dollars in 2026. Just in case anyone is hesitating about putting it on their wish list, Mayman is also working on afterburners.

The military has expressed interest in the jetpack because they are quick to take off and are highly maneuverable.  Courtesy Jetpack Aviation

Back at Goodwood Estate, I’m taking off the Jetsuit after a brief flight. Gravity’s half-day flight experience is priced for three runs and use of the training rig for about $3,500 per person, providing just a flavor of what the Jetsuit can do. But the $8,500 per person for the full day, with at least eight safety-tethered runs, provides a much fuller picture to the three-dimensional freedom that skilled pilots like Browning can enjoy.

“When you know what you’re doing, it’s effortless,” Browning says.