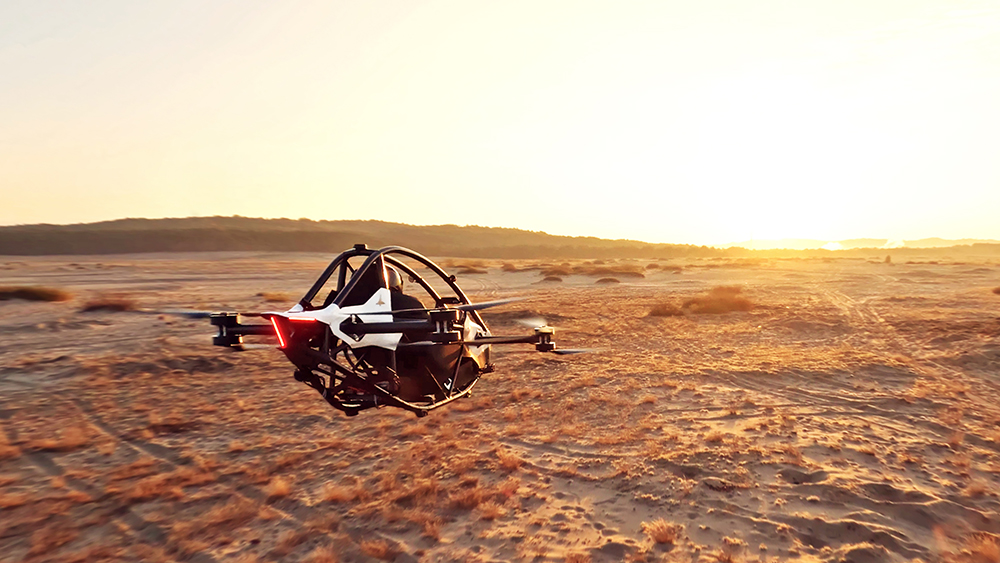 Ever since George Jetson climbed into his personal, portable flying car 60 years ago, the world has dreamt of doing the same. And according to Peter Ternström, cofounder of Stockholm-based Jetson, piloting one of its personal electric aerial vehicles is about as easy as it looked in the cartoons. Getting the hang go the brand’s new Jetson One, with deliveries starting in late 2023, requires all of five minutes. “It’s super intuitive,” he says. “We developed a fly-by-wire system that helps the pilot with functions like auto hover, stable flight and landing.”

A veteran of the luxury-car industry, Ternström partnered with aerospace engineer Tomasz Patan to launch Jetson in 2017. Instead of developing a more involved electric air-taxi like Joby Aviation’s S4, they opted to “make flight available to everyone,” as Ternström puts it, via an open, single-seat craft that would fit into the FAA’s ultralight category. Regulations for that class of aircraft mandate no flights near airports or crowded areas, but there’s also no need for a pilot’s license—which Patan and his engineers understand to be a terrifying thought for some. That’s why the team has striven to make the airborne transport as failsafe and foolproof as possible, while also including a mandatory instruction course in the Jetson One’s $92,000 price.

The 190-pound aircraft has an aluminum frame with eight electric motors, which allow it to remain aloft for about 20 minutes with a software-limited top speed of 63 mph. Pilots, who can weigh a maximum of 210 pounds, control the craft via joystick and throttle. The flight computer is equipped with Lidar for terrain tracking. The auto-landing system, meanwhile, handles the trickiest part.

Ternström asserts that the Jetson One will fly and land safely even if a motor dies or the throttle is cut. And while the model was intended to spend most of its time hovering between 5 and 20 feet off the ground, it has a ceiling of 1,500 feet—a ballistic parachute comes standard. Although it’s expected to be used mostly recreationally, Patan claims the personal aircraft has reduced his usual (rural) commute time by 90 percent.

Initial demand has been strong, with nearly 500 units already presold. For now, the only disappointment may be that it doesn’t fold into a briefcase like George Jetson’s bubble-canopied car. At least, not yet.