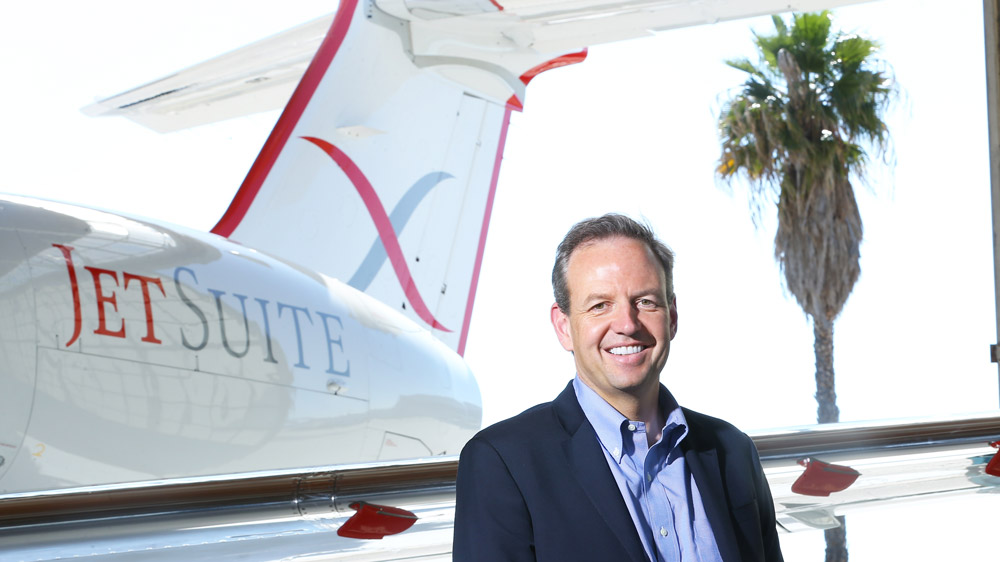 Alex Wilcox dreams big. Not only has his company shaken up the charter industry with JetSuite and JetSuiteX—a service that lets travelers book individual seats on semi-private flights—but it has also signed on to purchase up to 100 examples of the short-range, hybrid-electric Zunum jet, which sips fuel and produces 80 percent fewer emissions. We spoke with the innovative thinker about what’s wrong with the aviation industry and how technology can fix it.

What issues with air transportation keep you up at night?

The private-jet model and the ability to just quickly move around are constrained to too small a population. If you’ve got tons of money, then obviously you can fly privately, and that’s pretty good, but even that hadn’t changed very dramatically until JetSuiteX came on the scene. I do think there’s a bright, bright future ahead, both with shared travel and with new technologies, which we’ll be directly involved with.

What do your clients lose sleep over?

There’s been no real improvement in air traffic control. Even when you’re flying privately, you’re still suffering the same traffic control delays that anyone else in a commercial airplane is, especially if they’re using major airports. The cost continues to go up, as well. [Fuel has] gone up substantially this year, about 40 percent so far. Then there’s the environmental impact. Yes, it’s very convenient to fly privately, but it does burn a lot of gas per passenger. Is there any way to mitigate that? A lot of our customers ask us that.

Is that why you chose to adopt the Zunum jet so early?

We think that Zunum is one of the first companies to really have a shot at this.

Does Zunum bridge the gap between electric vertical-takeoff-and-landing aircraft (eVOTLs) and long-range jets?

It does. The line between a flying car and an airplane is going to blur, and a six- to 12-passenger executive hybrid-electric jet is going to be the closest thing in commercial aviation to a flying car. There will be those edge cases where you’re going to decide, do I take the eVOTL for a 50-mile trip or do I take the Zunum?

Looking at the aviation industry in general, what future technologies make your pulse quicken?

Besides the fuel, the most expensive thing in an airplane is the pilot. There’s a lot of time and energy being spent on self-driving cars right now, but self-flying vehicles already exist, and actually it’s easier to do because there’s just less stuff to hit up there.

So one of the most promising things is semi-autonomous tech. If you could have a panic button in-cabin that says, “Hey, my pilot just passed out. Push this button to land,” and the plane can land itself at the nearest appropriate location, that would be a major advancement for safety