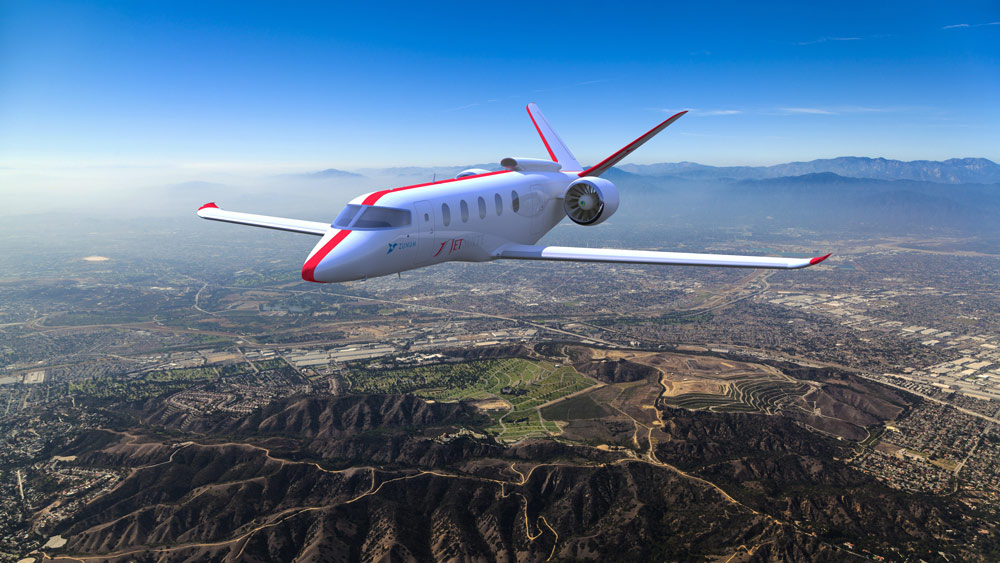 Although earthbound vehicles have typically been the target of efforts to reduce carbon emissions by utilizing hybrid and electric motors, the air-travel industry is also slowly starting to adopt the technology as well—especially when it comes to short, regional hops. One needs only to look at the recent Uber Elevate summit—where major players in the aerospace industry (think NASA, Bell Helicopter, and Embraer) came together to share their progress toward the goal of creating electric flying taxis for quick commutes—or the maiden flight of the hybrid Workhorse Surefly (both of which occurred earlier this month) to see how quickly the segment is progressing.

Now, charter provider JetSuite has announced that it will be the first recipient of the Zunum Aero hybrid-electric airplane, which could enter service as early as 2022. The company currently plans to refresh its fleet with up to 100 of the new planes, which can carry as many as 12 passengers—though JetSuite will use the more spacious six- or nine-passenger configurations—for distances up to 1,000 miles (far enough to reach L.A. from the Bay Area, or travel from New York to Cleveland), all while eliminating up to 80 percent of the carbon footprint left by a comparable plane.

“Zunum aircraft will significantly reduce our fuel consumption, making flights more efficient and cost effective,” says Alex Wilcox, founder and CEO of JetSuite. “We certainly have seen a shift in the industry in terms of customers moving away from whole aircraft and fractional ownership, and a desire to participate in a shared economy. We believe this mentality is in direct alignment with the notion of living in a more sustainable world and reducing carbon emissions, which is one of greatest benefits in partnering with Zunum.”

The new plane is powered by two low-noise electric propulsors that give it a maximum cruising speed of 340 mph (not quite as fast as these jets, but perfect for short trips). Instead of fuel, the wings contain banks of modular battery packs that can be upgraded as new technology becomes available to ultimately transition to fully electric flight.

But of course, JetSuite—partially owned by JetBlue, which also has a stake in Zunum—is not solely motived by eco-consciousness. “Zunum’s aircraft and mission fits very well with our desire to service abandoned markets in the U.S. by recapturing the short-haul market,” says Wilcox. “Since the year 2000, overall travel is up by a third, but flights under 500 miles are down by a third. It would take 1,000 aircraft to capture that lost market, and we believe that our commitment to purchasing 100 Zunum aircraft is a great start.”

Thanks to its low noise output, efficiency, and short runway requirements, the new craft will play an integral role in JetSuite’s plan to reinvigorate the declining regional flight market. Fliers will be able to land at more airports, putting them closer to their ultimate destination, reducing time spent on the ground in transit. Its electric motors also make it an obvious choice for mountain getaways, as combustion engines become less efficient as the air gets thinner. “This airplane will be the new flying SUV,” explains Wilcox.

Unfortunately, it will be a while before we see the Zunum in flight, and launch dates have a tendency to slip when it comes to innovative new aircraft. That said, Wilcox is optimistic, saying that the Zunum will be fully integrated into its fleet as soon as possible.