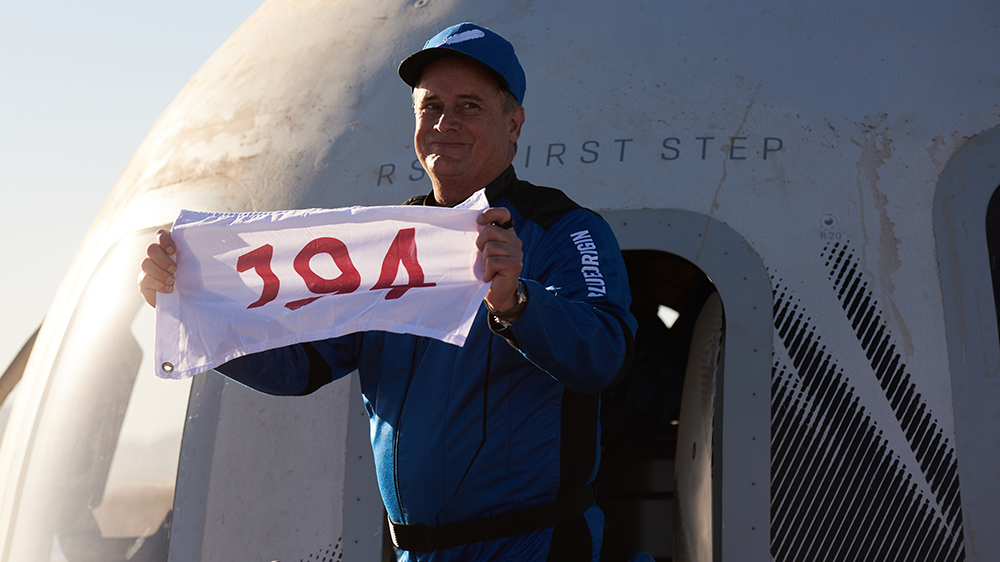 When Jim Kitchen flew into space on Blue Origin’s fourth human mission in March, he was in way better shape than the company required. Kitchen is a strategy and entrepreneurship professor at the University of North Carolina at Chapel Hill—but being an academic didn’t stop him from training like an athlete. He spent the previous 10 months preparing for the 10-minute flight, including cross-training with boxing and weight lifting. He also prepped for a 50-mile ultramarathon, running as much as 40 miles a day by the final month. “I ran somewhere close to 1,300 miles total,” says Kitchen.

“The last thing I wanted to do was be disqualified because I was unfit,” he says.

Robb Report spoke to the adventurer about his obsession with space and how going above and beyond at the gym can help you go out of this world.

RR: How long have you wanted to be an astronaut?

JK: From the time I was 6. I saw the Apollo 11 launch in 1969 with my mother and knew that was what I wanted. I became an entrepreneur instead, but I was determined to get to space somehow, some way. I’d been on a 30-year journey where I’d visited all 193 United Nations–recognized countries. After the 193rd country, in 2019, I thought to myself, “What’s my next journey?”

The fourth mission of Blue Origin, with Jim Kitchen aboard, launching in March.  Supplied

RR: Space? JK: I knew I had to find my way onto a space flight. I did a casting call for a reality show but wasn’t cast. I was one of tens of thousands of applicants for SpaceX’s Inspiration4 suborbit around the Earth last year but wasn’t chosen.

RR: But you kept trying?

JK: I could’ve been one of the first 600 passengers with Virgin Galactic, but I didn’t want to wait. Then I made a contact via LinkedIn with someone from Blue Origin. I emailed him about 20 times—just badgered him—and the next thing you know, I was on the March launch.

RR: How did you prepare for it physically?

JK: In 2021 I started training for that ultramarathon. I’m a runner and have done 20-plus marathons, but I cranked up the running in anticipation of the space trip. Besides long distance, I did track workouts, running 400 and 800 meters. I also crossed-trained for upper-body and cardio-vascular strength by weight lifting and boxing two days a week.

JK: Yes, though the Blue Origin flight was more intense than I thought it would be. When we took off and hit 3.5 Gs, the rocket made a slight turn and tilt, which messed with my vestibular system. I even found that ascent a bit more challenging than the descent, where we exceeded 5 Gs. I’d experienced 6.2 Gs in a NASTAR training course, but this was even more intense than that. [Editor’s note: The National Aerospace Training and Research Center is the first Federal Aviation Administration–approved commercial spaceflight school.]

RR: Wait, you did a space-prep course?

JK: It was a two-day suborbital space course, which included training and flying in a specially designed centrifuge. The course lets you understand what the flight will be like and how to counter the challenges. It was helpful because we learned the same breathing techniques that fighter-jet pilots use to avoid becoming disoriented. The last thing I wanted to do was pass out. I was breathing well and really enjoyed the view up there.

JK: You don’t have to do it, but I’d recommend it to people. I also did parabolic flights, which were good because I found out what zero gravity feels like before going to space. Everyone on those parabolic flights got sick. I didn’t get sick at all.

RR: Do you want to go again?

JK: My dream is to visit the International Space Station. I’ve been to every country that the UN recognizes, and I want to see that whole spectacle from space, just without the borders. The problem is that I don’t have $55 million just to do that. But when you get a little taste, you want a lot more. That’s why it’s important for me to stay in “space” shape by working out two times a day and eating right. I hope one day to get orbital.