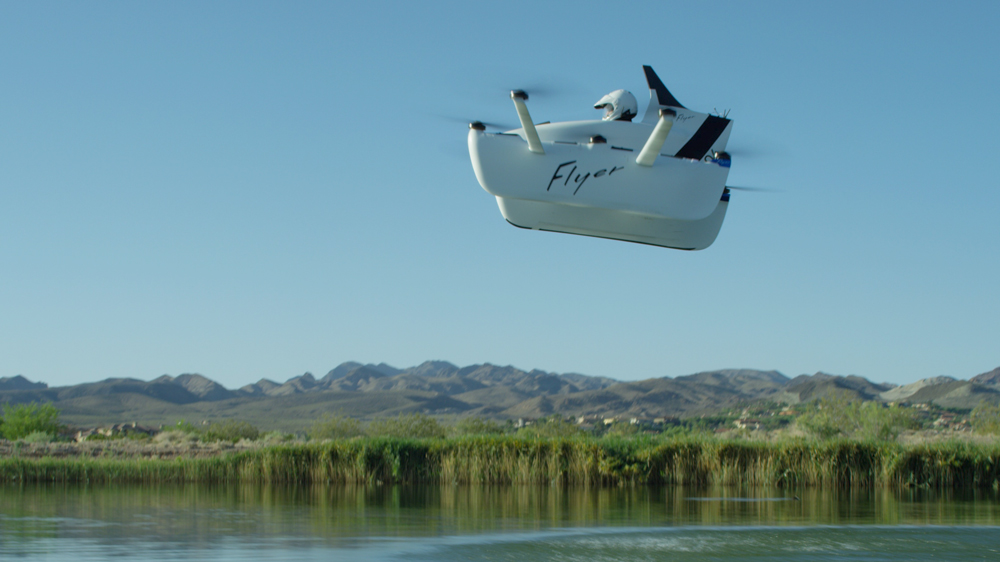 The Kitty Hawk Flyer personal flying machine that we first profiled last year has come a long way since we last saw it in action. At that time—although it certainly looked like it would be a blast to buzz around on—the prototype was still in quite a rough state: It essentially looked like a platform made from netting with a seat on top connected to an array of downward-facing propellers and two pontoons.

However, the craft that was recently unveiled—not too long after the Larry Page–backed company caused a stir last month when it revealed its Cora flying taxi—looks light-years ahead of the original example, mostly due to its sleek new bodywork and rows of propellers (10 in total) mounted on top of struts that extended from the vehicle. The zero-emissions Flyer is completely powered by electricity, and its propellers all operate independently, meaning that if there is a problem with one or more propellers, the entire vehicle won’t come crashing down. That said, even if it did, the aircraft is only meant for flying over water and only flies between three and ten feet off of the surface, so even a worst-case scenario would only involve a short plop into the water.

The Flyer only accommodates a single pilot and no passengers, but since the FAA categorizes it as a recreational ultralight vehicle, you don’t need any sort of certification or registration to fly it. Sensors and software aboard the craft keep it fully stabilized in the air, allowing the pilot to control it with just two joysticks. The company says most people are able to confidently fly it in under two hours. That said, flight time tops out at 20 minutes on a single battery charge, so it might take a few trial runs before you master it.

Kitty Hawk has not yet set a release date for its Flyer, but it has already set up a training facility on Lake Las Vegas to give people a taste of flying its baby. Those interested in buying one for themselves can apply to preorder through its website.

Don’t miss the chance to drive, fly, and play with some of the most exciting vehicles and gadgets on earth. Register to attend Robb Report’s Dream Machines now. For more information, please visit rr1.com/dream-machines