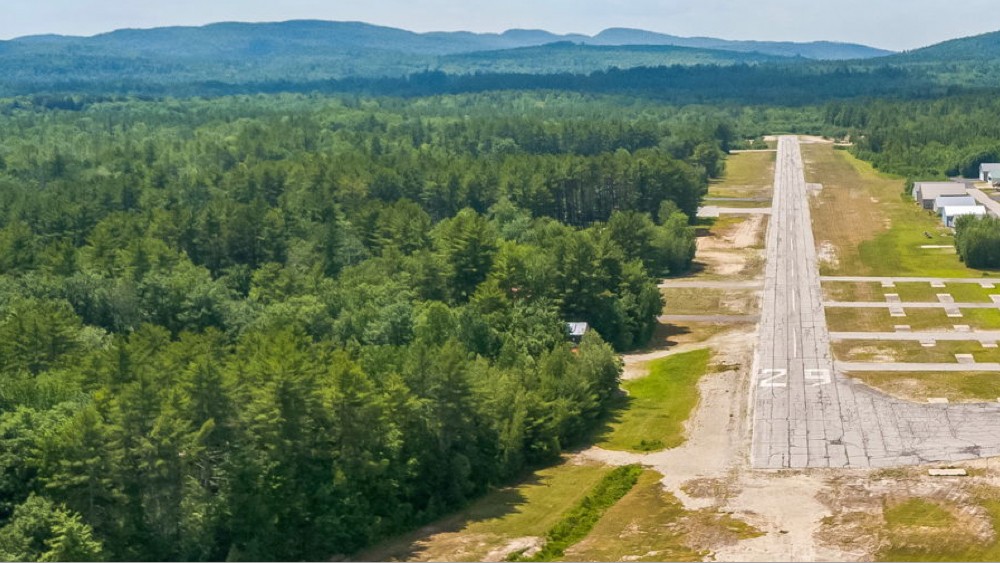 Anyone with the means can own a plane—or at least charter one—these days. The new power move is to own a private airport, especially one with an adjacent housing development that allows you to taxi from the runway to your own driveway.

Want your own?  Limington Airport is up for sale in southern Maine, offering access to nearby Portland and only a two-hour drive to downtown Boston. The 43-acre property is already a working airfield attached to a roll-up housing development. It’s on the market for $2.5 million. “It’s a unique property,” says Kevin Fletcher, the realtor representing the owner.

Well, maybe not quite yet. The 2,973-foot runway isn’t long enough for jets, but Fletcher believes it can be expanded. While the airport is privately owned, the previous owner kept it open to those outside the neighboring community and ran it as a business, which includes a restaurant and 30,000 square feet of hangar space, all of which is currently leased out to plane owners. “I’m not an expert on the ‘if you build it, they will come’ theory, but because all the space is taken, it makes me think there’s demand for more,” Fletcher says.

Limington sits in a pleasantly rural area, surrounded by lakes, and is only 30 miles west of Portland (i.e. the ocean) and 115 miles north of Boston.

There are more than 600 residential airparks and fly-ins across the US. The concept of an aviation-based community started after World War II, with the return of thousands of pilots. Most are located in suburban and rural areas. Some are very small, modest communities, with grass landing strips and rustic homes, while others have golf courses, country clubs and restaurants. Most of the runways are not operated by the FAA since they are technically not commercial airports.

Florida has the largest number of private airparks—52—with the two most famous being Spruce Creek and Jumbolair, Both are upscale developments with large homes with hangars, equestrian centers, spas and restaurants. A recent Spruce Creek mansion was priced at $6.25 million, with its own hangars and runway access. Jumbolair, with the largest runway of any residential aviation community, is the only one able to accommodate a Boeing 747 and other commercial jets. Its most famous resident is John Travolta, who has a collection of seven commercial jets. Travolta attained his commercial license for a 737 in March.

The country’s largest airpark is Pecan Plantation in Granbury, Texas, an hour outside of Fort Worth. It has 3,100 homes, two runways and two golf courses, a country club, tennis courts and an equestrian center.

An Embraer business jet sits outside its home in Jumbolair.  Courtesy AP

Other properties are being marketed as uber-exclusive fly-ins.

“The Fields,” a 1,500-acre site in southeastern Tennessee, has already sold 40 properties, according to a story in Flying magazine. The development is being marketed by its owner, Craig Fuller, who also recently purchased Flying, as a “way of life” to a younger generation of private fliers. The property has access to wooded trails, rock climbing, an equestrian center, spa, vineyard and fishing, and of course, flying. Home hangars will connect directly with the runways. The project, which broke ground this spring, will have 800 homes, 180 vacation villas and 35 hangars.

“Most airparks are old and aging,” CP Jois told Flying. “The Fields brings a new flavor to the concept of an airpark.”

Back in Maine, Kevin Fletcher also sees upgrade potential for Limington Airport. “The ideal buyer is someone who wants to develop the land in a way that supports the airport,” he says. “That could be residential and commercial projects.”