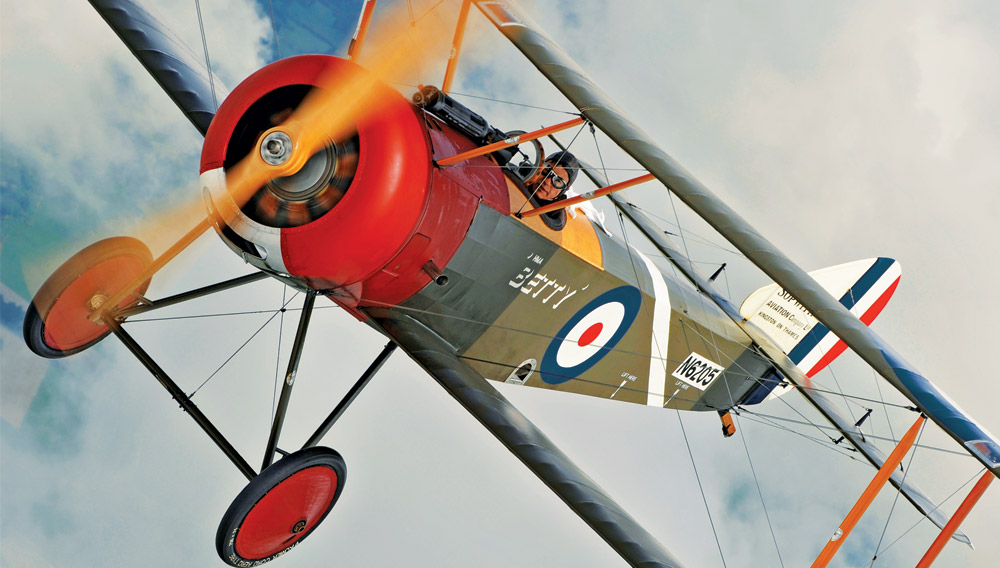 In New Zealand, a New York native has become the leading reproducer of World War I planes.

No one has more documented experience piloting original and replica World War I aircraft than Gene De Marco. His 14,000 flight hours include more than 10,000 logged in small planes such as the Sopwith Camel, a British fighter that showed no mercy to green pilots. De Marco proved his mettle when he piloted a Camel replica owned by the film director Peter Jackson at an air show in New Zealand in 2001. While in flight, the plane’s aluminum engine cover, or cowling, loosened and fell forward into the propeller, which shredded it. A large chunk of debris lodged in the wires that support the wings and fouled the plane’s aerodynamics, but De Marco guided the Camel back to the ground safely. (Video of the flight is posted on YouTube.) After the incident, De Marco repaired the plane so that it more accurately reflected the original design and cowling attachment.

De Marco knows all about the design plans for the Camel and other World War I–era planes because his company uses them—as well as computer-assisted drawing and 3-D modeling—to build reproductions of these aircraft. Ten years ago, the 52-year-old native of Queens, N.Y., founded the Vintage Aviator (originally called Wairarapa Aviation) in Wellington, New Zealand, where he had relocated after Jackson lured him there to fly his Camel. Every aircraft that De Marco and his company’s 52 employees build is flight worthy, except for those destined for static display in museums. De Marco serves as the test pilot for each plane that can fly. Prices range from $400,000 to $1 million, depending on the complexity of the aircraft.

Over the years, the Vintage Aviator has produced 30 types of World War I–era planes, including the Sopwith 7F.1 Snipe, the Bristol F2b Fighter, and the Albatros DVa. “We build them exactly like they were, from original plans,” says De Marco.

The company typically produces a plane model on spec in a limited-edition run of three or four examples. It rarely accepts commissions. “I don’t like the pressure to work to someone else’s schedule,” De Marco explains. “Sometimes I don’t know how I’m going to make something. I want to focus on getting it right.”

De Marco’s fascination with airplanes began early. Both of his parents worked for Pan Am, his mother as a flight attendant and his father as an aircraft inspector. He enjoyed visits to their workplace (John F. Kennedy International Airport in Queens) and outings to the Old Rhinebeck Aerodrome in the town of Red Hook, N.Y., a wonderland of World War I aircraft and other antique planes. By 15, De Marco was taking flying lessons; by 16, he was restoring a Piper J-5, a World War II aircraft, in the family garage while his father hovered over his shoulder; and by 17, he was flying the Piper across the country. “I had very encouraging parents who thought, ‘This [the J-5 project] will keep Gene out of trouble.’ They were 50 percent correct.”

While working on the plane, De Marco was also restoring a Chevrolet Camaro. “I drove it quite fast,” he says, “and I had several speeding tickets. I thought maybe the plane would be a better way to go. When I was on the verge of losing my driver’s license, I got my pilot’s license.”