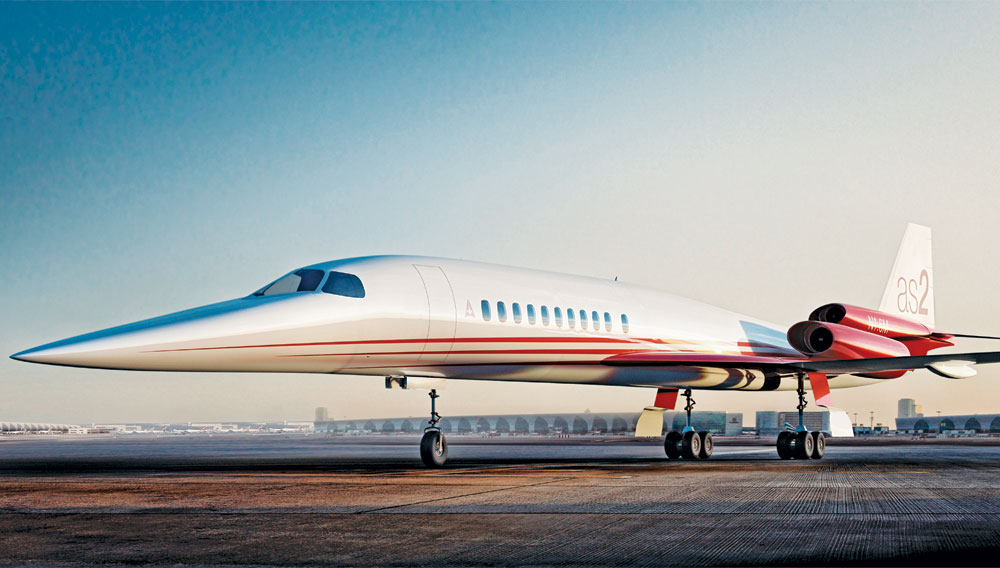 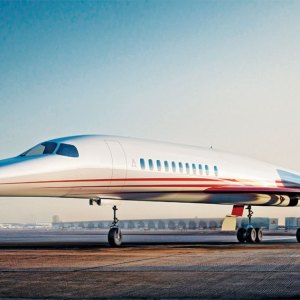 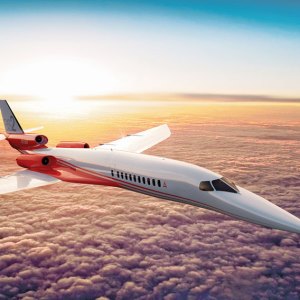 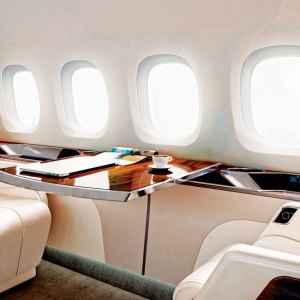 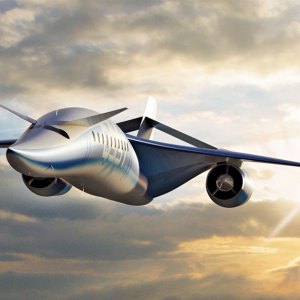 Supersonic business jets are being developed, but their noise must be muffled before they can fly over land at full speed.

Though the fastest business jets approach the edge of supersonic flight, with top speeds exceeding Mach 0.9, no civilian aircraft has ventured beyond Mach 1—the speed of sound—since the Concorde fleet was grounded in 2003. But because supersonic speeds continue to entice travelers with their ability to cut flight times in half or more, a handful of fledgling and established aircraft companies, as well as NASA, are developing—or considering the viability of developing—supersonic business jets.

Building a jet that flies faster than the speed of sound is not the challenge for aircraft makers. Chuck Yeager first broke the sound barrier in 1947; Concorde, which could reach a cruising speed of Mach 2, made its first supersonic flight in 1969, and the fleet began flying the three-hour route between London and New York in 1976; and military aircraft fly at supersonic speeds every day. The challenge is building a supersonic jet that is relatively fuel efficient (Concorde aircraft, which consumed nearly 6,800 gallons of fuel per hour, became too costly to operate) and relatively quiet.

Public concerns about the ground-level noise and vibrations that Concorde’s sonic booms would create prompted the U.S. Federal Aviation Administration to enact a regulation in 1973 that bans civilian aircraft from flying over land areas of the United States at speeds greater than Mach 1. Similar regulations are in effect for most of the world’s inhabited land areas. They limit aircraft speed, or they prohibit sonic booms. No such rules exist for the airspace over international waters.

“We need a rule change,” says Robbie Cowart, the director of supersonic technology development for Gulfstream, the company that makes the G650 and other business jets. “This speed limit in the sky is holding everyone back.”

Gulfstream has been working for years—on its own and in partnership with NASA—to find ways to mitigate the sonic boom. The company has been conducting test experiments in wind tunnels and in the atmosphere, and collecting data on a variety of potential solutions. “It’s not just about the engines,” says Cowart. “It’s all of the aircraft that affects the noise signature. It’s the wing, the tail, the entire design.”

Peter Coen, the project manager for the Aeronautics Mission Directorate’s High Speed Project at NASA’s Langley Research Center in Virginia, says technology that would reduce the sonic noise to a tolerable level for people on the ground “looks promising.” He says that within five to seven years companies could produce experimental aircraft that are quiet enough to satisfy the public and the agencies around the world that regulate air travel. “The real devil is in how much it would cost and who’s willing to develop that technology,” Coen says. He also anticipates that it will take time before there can be any serious consideration to changing the regulations that prohibit supersonic flight. “That’s a slow process,” Coen says. “It’s a global geopolitical challenge.”

Nevertheless, the race to develop the first supersonic jet for the business-aviation market has been under way for more than a decade. Gulfstream, Boeing, and Lockheed all have partnered with NASA to explore the technology. Cowart says Gulfstream is making a “modest” investment in the research. “We don’t see a viable market unless the [speed-limit] rule changes,” he says.

Other companies are fully committed to supersonic R&D, regardless of the U.S. and international rules. In Reno, Nev., Aerion Corporation is developing the AS2, which, the company says, will have a top speed of Mach 1.6 (faster than 1,100 mph) and a nonstop range greater than 5,700 miles. It will seat as many as 11 passengers in a 30-foot-long cabin. The jet’s design features three engines and a uniquely shaped wing that, the company says, will reduce drag far more than a conventional swept wing or delta wing (such as Concorde’s), enabling the aircraft to fly faster and more efficiently.

“We don’t see the current noise rules in any way diminishing the demand for this aircraft,” says Aerion CEO Doug Nichols. “The real utility of this airplane is on long-range over-water routes, where speed is unrestricted, like San Francisco to Singapore.” When it flies over land, the AS2 will be able to cruise at a subsonic Mach 0.99, which is considerably faster than any of today’s business jets, but slow enough to prevent a sonic boom.

Aerion, which investor Robert Bass established in 2002, introduced its first supersonic concept, the twin-engine Supersonic Business Jet, 10 years ago and began taking orders for it in 2007. But plans to partner with a manufacturer that would have produced the plane stalled during the recession. In the interim, Aerion developed the larger and longer-range AS2, which it announced in May. The company is now trying to assemble a consortium of companies to develop and eventually produce the aircraft. Nichols says Aerion hopes to have all of those companies in place by 2016 and to have the plane flying by 2021. “We think it’s eminently doable,” Nichols says, noting that the company already has invested more than $100 million in development costs. “Aerion has the wherewithal to fully finance the program.”

Spike Aerospace, based in Boston, also is working on a supersonic business-jet design, the S-512. The company claims the aircraft will have a cruising speed of Mach 1.6, enabling it to fly from New York to London in as little three hours and from Los Angeles to Tokyo in six hours. It will seat 12 to 18 passengers.

“We’re at a very early stage,” says Vik Kachoria, Spike’s president and CEO. “There’s ongoing analysis and design work we’re doing, with new configurations and specifications.” For example, a recent rendering of the S-512 included a windowless cabin with real-time video of the view from the plane projected on the cabin walls where windows normally would be. Kachoria says that feature is still evolving. The absence of windows would reduce aerodynamic drag and cabin noise, but it could cause passengers to feel claustrophobic or nauseous. “There are a lot of advantages there,” he says, “but we might rethink that and include some windows.”

Kachoria says he is hoping to close soon on a new round of investment that could finance the creation of a full-size flying prototype. “That’s where it gets really exciting,” he says. “We want to get something up in the air as fast as we can.” He would like to have an aircraft ready for the market by 2020. “It’s a very tight, ambitious, aggressive time frame,” he says, “but I think it’s doable.”

Like Aerion’s Nichols, Kachoria says the prospect of flying at supersonic speeds on transoceanic routes will attract customers, even if the regulations do not change and the jet has to slow down over land. “There’s plenty of opportunity [for sales] in Asia and the Middle East, for example,” he says. “We think there’s a large enough market. There’s a need for speed in aviation.”

Among the other supersonic-jet designs being developed is one by Michael Paulson, the son of Gulfstream founder Allen Paulson. He launched Supersonic Aerospace International in 2001 to pursue his ideas for a “virtually boomless” supersonic business jet. SAI hired Lockheed Martin’s Skunkworks design team, which produced a design for a supersonic jet that, according to the company, would be 100 times quieter than Concorde. The project, known as the Quiet Supersonic Transport (QSST), stalled in 2010 after a licensing agreement was terminated but was resurrected last year as a larger aircraft, the QSST-X, which could serve as a business jet or a commercial airliner. The cabin would seat more than 20 passengers in an airliner configuration and as many as 18 passengers when configured as a business jet. The aircraft’s projected long-range cruising speed is Mach 1.6, with a maximum cruising speed of Mach 1.8, and its projected range is beyond 5,700 miles.

It is possible that a new company could emerge and become the first to put a supersonic business jet into service. It is also possible that a new technology will come along and render supersonic flight obsolete. Apparently, supersonic is not fast enough for Richard Branson. He recently said he plans to take on the challenge of hypersonic aircraft travel once his space-tourism business, Virgin Galactic, is up and running. He predicted that, possibly within his lifetime, Virgin Galactic will be able to take passengers from New York to Tokyo in less than an hour, traveling at 19,000 mph via an orbital flight path.