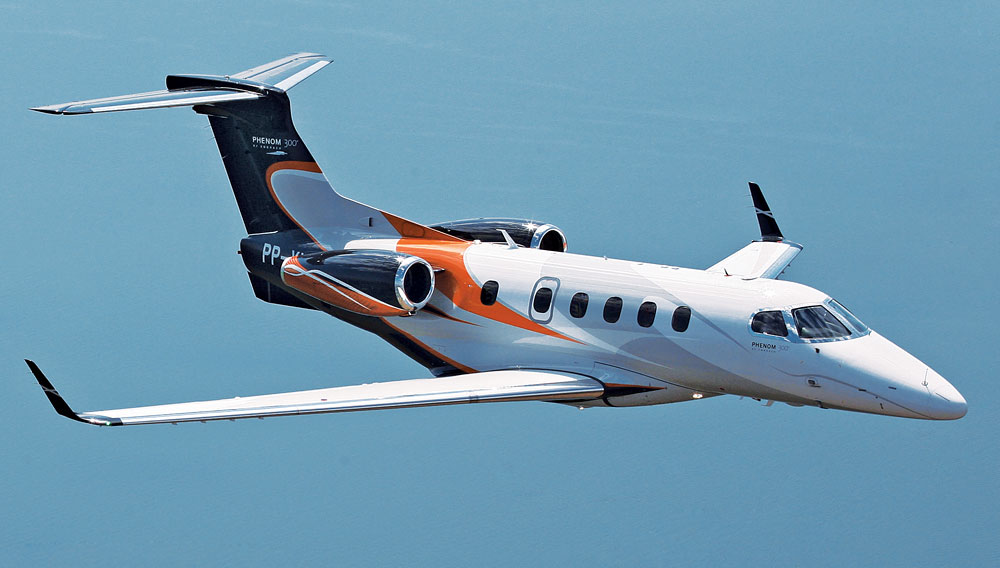 Over the last decade or so, the Bra­zilian aircraft manufacturer Embraer has forced its competitors to change the way they approach business-jet design. Founded in 1969, Embraer initially built only military and commercial planes; it is now the world’s third-largest manufacturer of commercial jets, behind Airbus and Boeing. The company did not enter the private-aviation business until 2000, and so it had time to analyze other manufacturers’ aircraft and assess their shortcomings before designing and building its own business jets. The company based its first executive model, the super-midsize Legacy (now known as the Legacy 600), on its 37-passenger ERJ 135 commercial airliner, equipping the new jet with a spacious 14-passenger cabin and more in-flight access to baggage than any other business jet had at the time. (In 2009, Embraer launched the Legacy 650, with upgraded avionics and a longer range than the 600.) After five years of R & D, Embraer introduced the Phe­nom 100 and the Phenom 300, two clean-sheet designs that entered service in 2008 and 2009, respectively. Both offer performance on a par with other jets in their categories, but their operating costs are considerably lower. The entry-level Phenom 100 is priced at approximately $4 million; the Phenom 300 light jet is roughly $9 million. While other manufacturers scramble to push models into service that will be more competitive with the Phenom jets, Embraer is already well into the process of certifying its next models, the $19.9 million Legacy 500 midsize jet and the $16.5 million Legacy 450 light-midsize jet, which are expected to enter service in early 2014 and in 2015, respectively. These aircraft will be the only models in their categories offering fly-by-wire controls and flat-floor cabins. 954. 359.3700, www.embraerexecutivejets.com