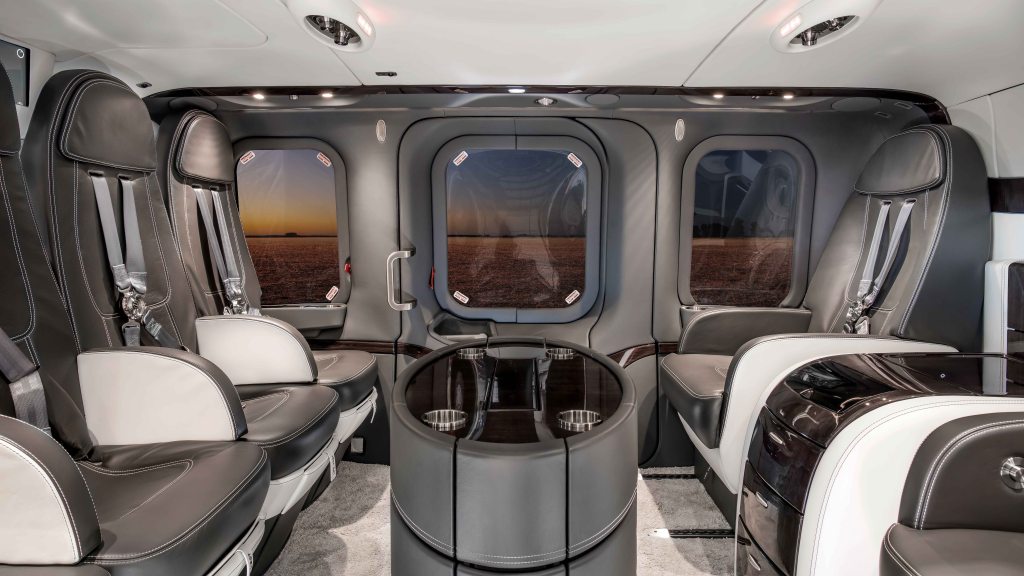 A helicopter solves the problem of many travelers—how to avoid traffic in a crowded city center and get directly to your destination, or to your private jet or yacht, as efficiently as possible. But they’re noisy inside, and passengers often wear headsets for the duration of the trip, to ease communication in the cabin. Mecaer Aviation Group says it has solved that problem, with its sound-reducing technology called SILENS (Sound Intensity Level Enhanced Noise System), which reduces the noise in the cabin to the point where travelers can ditch their headsets.

The system is “essentially a cocoon, or a capsule, that goes inside the airframe,” says Grayson Barrows, the director of cabin comfort systems for Mecaer. “It reduces the transmission of vibration and sound from the airframe and the engines to the passenger area.” Mecaer manufactures and inserts the liners, Barrows said. The liners create a gap between the passenger area and the airframe, which acts as a buffer.

The AW139’s cabin is large enough to seat up to 15, though an executive cabin is usually outfitted for six to 10.  Photo: Courtesy Mecaer

Mecaer recently announced the delivery of a VIP-configured AgustaWestland AW139 equipped with the SILENS technology as well as the company’s In-Flight Enhanced Entertainment Lounge. The I-FEEL system runs the audio and video systems, the SatCom phone, the electrochromic windows, moving maps, and external cameras. “It’s extremely flexible,” says Barrows. “Everything is customizable, you can quickly transform from a private flight with family to a flying boardroom atmosphere.”

The Italian-built twin-engine AW139’s cabin is roomy enough to seat up to 15, though an executive cabin is usually outfitted for six to 10. It flies at speeds up to 190 mph for up to 575 miles.