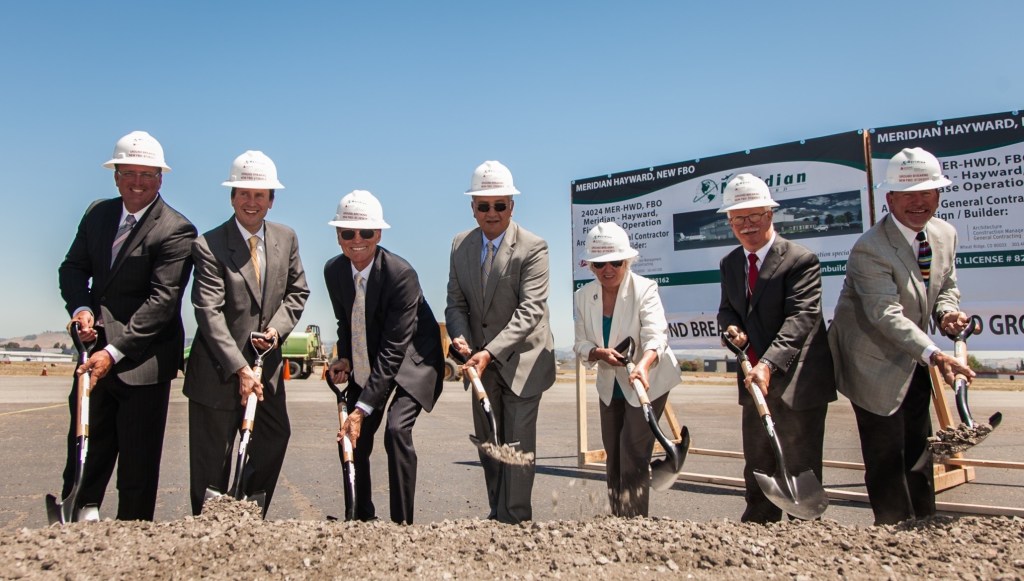 Hayward, CA, August 4, 2015 – Meridian, the award-winning private aviation company based at Teterboro Airport (TEB) in northern New Jersey, is expanding to the West Coast. On Wednesday, July 29, 2015, the company hosted a ground breaking ceremony at the site of its future FBO and hangar facility at Hayward Executive Airport (HWD) in Hayward, CA.

The ceremony featured speakers from business and local community leaders, including executives from Meridian and Tectonic Design (the architectural firm), dignitaries from the City of Hayward, and officials from Hayward Executive Airport. After the speeches, there was a ceremonial turning of the soil with hard hats and shovels, followed by a luncheon sponsored by Jet Gourmet at the recently dedicated Hayward Airport Administrative Building.

The new facility will be completed in multiple phases, with an initial commitment of $10 million. Phase I will feature a 6,300 sq. ft. FBO, a 30,000 sq. ft. hangar, and 3.5 acres of ramp. The hangar will be able to accommodate any corporate aircraft up to and including a Global Express and Gulfstream G650. Subsequent phases will add another 12,000 sq. ft. of terminal space, provide an additional 80,000 sq. ft. of hangar space, and increase the ramp size by 7 more acres.

Ken Forester, Meridian’s CEO, had this to say, “We are really excited to be breaking ground here at Hayward Executive Airport. This marks the beginning of a new era for our company. We are looking forward to growing our business here on the West Coast, and to creating good quality aviation jobs in the local economy. Hayward and the greater San Francisco region was an ideal choice for us, and we are proud to be part of its future.”

Meridian began its western expansion in September 2012, with the opening of a charter sales office at the San Jose International Airport (SJC) in San Jose, CA. A second sales office, located at the Sonoma County Airport (STS) in Santa Rosa, CA, opened in November of that year. In early 2013, the company based its first West Coast aircraft available for charter at Hayward Executive Airport (HWD) in Hayward, CA.

On January 1, 2014, Meridian signed a 50-year lease with HWD with plans to build a full-service, world-class FBO and adjoining hangar at the airport. Hayward is situated on the southeast side of the San Francisco Bay. It is centrally-located between San Francisco, San Jose and Oakland. The airport, which can accommodate large-cabin aircraft, has no curfew and provides convenient access to a wide variety of popular destinations.

Once fully operational, Meridian Hayward will offer fuel, maintenance services, well-appointed passenger and crew facilities, and many other amenities. The location will also serve as the West Coast base for Meridian Air Charter and Meridian Aircraft Management. The company is planning to offer private charter services from Hayward by expanding its fleet of managed aircraft based at the new facility. Completion of the project is expected in the fall of 2016, with a grand opening to follow shortly afterwards.