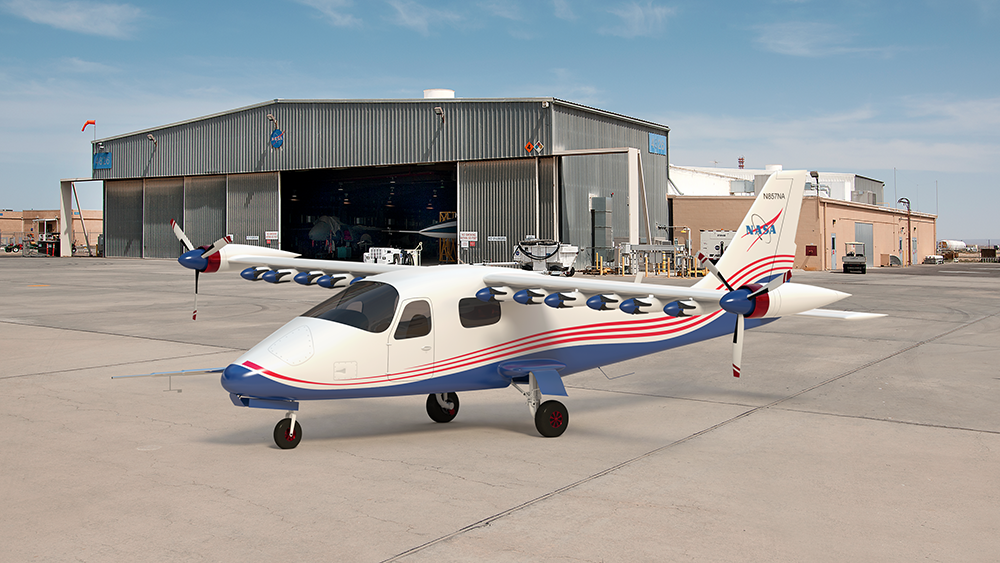 Houston, we (nearly) have liftoff. NASA’s first all-electric plane is nosing closer to completion after embarking on its next stage of rigorous testing.

The aircraft, dubbed X-57 Maxwell after physicist James Clerk Maxwell, was first delivered to the space agency in October 2019 and recently began high-voltage functional ground testing at the Armstrong Flight Research Center in Edwards, Calif. This marks a pivotal milestone for the project as it moves from the prototype phase towards first flight.

NASA created the zero-emissions aircraft to demonstrate how commuter planes could switch from traditional combustion engines to electric motors for cleaner, quieter and more sustainable air travel. To that end, the X-57 Maxwell is actually a modified Tecnam P2006T aircraft that will be fitted with 14 electric motors instead of the original two piston engines.

The X-57 operations crew at work on the electric aircraft.  NASA/Ken Ulbrich

The two-seat vessel features a svelte, high-aspect-ratio wing—for the unversed, this simply means long and narrow—that is designed to boost efficiency by reducing drag. It sports two motors with five-foot-wide propellers on the wingtips that will be used for cruising, along with 12 high-lift motors and propellers along the leading edges of the wings to help the aircraft with take-off and landing. When not in use, this dozen folds back in to avoid additional drag.

In addition to the reduced carbon footprint, NASA anticipates that the system will be much more efficient in power consumption than traditional planes. NASA expects the X-57 will have a range of roughly 100 miles and a cruise speed of 172 mph. It will also have a maximum flight time of approximately 40 minutes.

However, NASA isn’t looking to put the X-57 into production itself. Rather, it hopes that the design will inspire manufacturers to develop their own commercial versions while giving agencies like the FAA an opportunity to develop the necessary regulations for such aircraft.

This isn’t NASA’s first foray into the burgeoning aviation sector. In fact, the agency identified electric aircraft as the wave of the future back in 2015 and has since rolled out an Advanced Air Mobility National Campaign to get emerging eVTOLs and urban air mobility vehicles into the national airspace system. At the same time, NASA’s aeronautics researchers are currently developing new aircraft propulsion technologies to turn electric-powered flight into an everyday reality.

First thing’s first, though, the X-57 has to actually take to the skies. The latest round of testing will see the aircraft run off a battery support system with a large, high-voltage power supply. This will enable engineers to validate the integrity of the vehicle for flight conditions, before taxi tests kick-off.

“We’ve turned a corner from system design and lab tests, to turning it over to the NASA flight systems and operations engineers to actually operate the vehicle,” Sean Clarke, NASA’s X-57 principal investigator said in a statement. “What they’re learning in this test, they’ll take with them into the control room for first flight.”

Keep your eyes on the skies, folks.