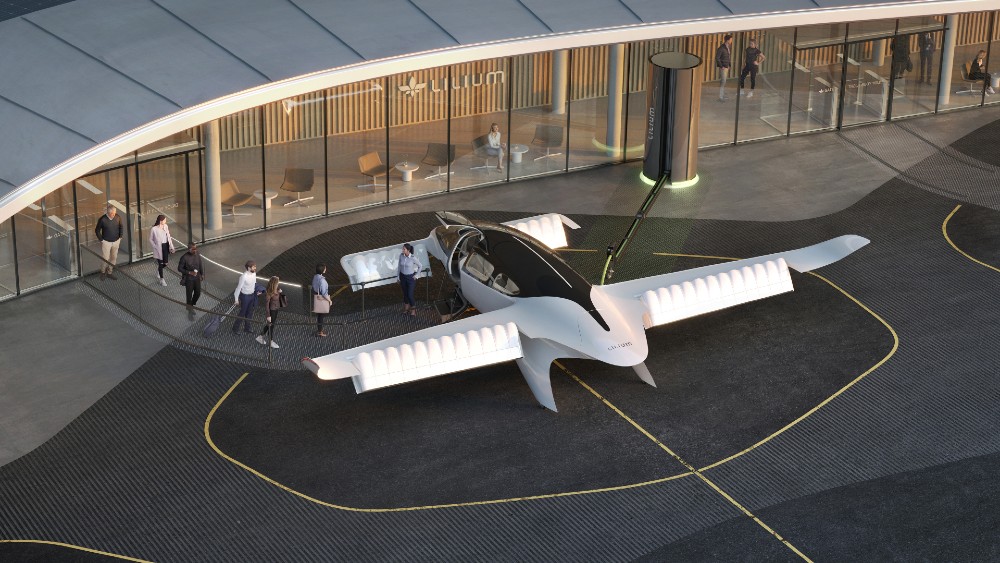 Will you soon be hopping into an electric jet rather than using the company limo or UberX? Business aviation’s largest company, NetJets, is the latest air provider to partner with an eVTOL maker to save commuting time for its clients.

NetJets has signed a memorandum of understanding to acquire up to 150 electric aircraft from Munich based Lilium. The electric regional aircraft would provide more options to NetJet owners for their private flights, said the company. The Berkshire Hathaway company said it will also support Lilium in a sales campaign to offer its electric jets in fractional shares.

Lilium has already started a transportation hub in central Florida that it says will link the state with eVTOL aircraft. Its jet is expected to be certified in 2024, and can be configured in both four-passenger (luxury) and six-passenger (shuttle) versions, with a seat for a pilot.

Old school meets new: NetJets plans for its business jets (left) to have an added reach by using Lilium eVTOL (right) for the final leg of the trip.  Courtesy NetJets

“We’ll explore deploying Lilium Jets in select locations to allow [our] owners to travel to and from their NetJets aircraft or on shorter hops to their favorite nearby destination,” NetJets told Robb Report in an email. “We will also be working with Lilium to operate their network in Florida and other key regions in the U.S. and Europe.” NetJets says it hopes to have commercial agreements for the aircraft completed by summer 2022.

Daniel Wiegand, CEO of Lilium, said that private and business aviation will be “early adopters of the eVTOL revolution.”

The companies said that Flight Safety International would provide the training for the pilots and develop an operational infrastructure. “Our focus on technology and adaptive learning will help prepare aviation professionals with the highest levels of expertise to support operation of the Lilium Jet,” said Brad Thress, CEO of FlightSafety International.

The interior of the Lilium electric jet can be configured for six or in a more luxurious four-seat layout.  Courtesy Lilium

United Airlines said last year that it would invest in eVTOL maker Archer and placed an order for $1 billion of its aircraft. Archer said it plans to begin volume manufacturing in 2023.

California-based Joby said last month that it had partnered with ANA, Japan’s largest airline, to establish an aerial ridesharing service in Japan. Toyota Motor Corp. has also joined the partnership. The five-seat Joby aircraft will have a maximum range of 150 miles and top speed of 200 mph. The company is currently testing its aircraft, with plans to launch commercial operations in 2024.